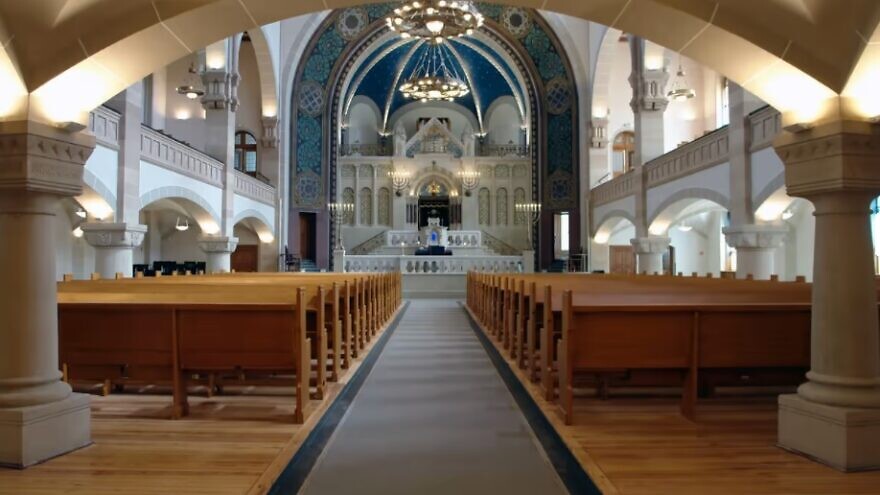 (September 6, 2021 / JNS) To communicate with God at a synagogue over the High Holidays, Jews throughout Germany must generally abide by the “3G” concept that went into effect in late August: Geimpft, genesen, getestet—an alliteration for “vaccinated, recovered, tested.”

As Germany’s version of Israel’s “Green Pass” system, this concept allows individuals to take part in public events and activities, such as celebrations and indoor restaurant dining, only if one of these three conditions is met.

Each of Germany’s 16 federal states varies in the “3G” implementation. In Berlin, home to some 100,000 Jews, the “3G” concept does not apply to religious worship (as long as distancing is adhered to), though most synagogues are basing their own concept on it.

“Every synagogue decides for himself how they want to deal with it,” said Rabbi Boris Ronis of the Conservative-liberal Rykestrasse synagogue, one of the oldest and largest synagogues in Berlin. It was spared destruction during the Kristallnacht pogroms thanks to its location in the heart of a residential area; today, the trendy, café-lined neighborhood of Prenzlauer Berg.

“It’s difficult. It’s corona. Nobody knows,” said Ronis. “We ask the people for ‘3G,’ and that’s it. We wear masks and distance. That’s what we can do.”

For large synagogues like Rykestrasse, walk-ins are allowed, but smaller synagogues may require registration to abide by hygiene regulations given limited space—a habit some synagogues have already implemented for security purposes during Shabbat and holidays.

“On normal days, only every second seat in the synagogue may be occupied. For the holidays, we’ve come up with something special. Last year, we were the first synagogue in Germany to inaugurate an open-air synagogue for the High Holidays. Services will be held there this year as well,” said Jana Erdmann, head of press and communications for Chabad’s Jewish Educational Center in Berlin. The open-air synagogue consists of a large tent, heated when necessary.

However, it might be more difficult for parents to attend with small children. This year, sensitivity to the spread of infection has made playgroups impractical, both at Chabad and at Rykestrasse. At the height of the last lockdown (from November 2020 to May 2021), singing (as opposed to reciting) liturgy was not allowed, but now worshippers can belt out the seminal Kol Nidrei and U’netanek Tokef prayers—from a fixed seat and at a distance.

An added obstacle to German synagogues, which serve a Jewish population of some 200,000, is security. In 2019, a Syrian refugee wielded a knife in front of the New Synagogue of Berlin, shouting “Allah Akbar.” Days later on Yom Kippur, a right-wing extremist attempted to shoot down worshippers at the synagogue of Halle, but he could not make it through the bolted gate.

“The police presence is generally always higher than usual during Jewish holidays, and tighter security measures are in place because of repeated attacks in recent years,” said Erdmann. “The pandemic has further fueled anti-Semitic sentiment. Both our security and the police, who are positioned in front of our building, are attentive to this.”

Rykestrasse has not changed its security concept this year, believing the threat is omnipresent. “This is Germany,” said Ronis.

Security guards at synagogues usually screen people who enter for any red flags. This year, synagogue-goers might also have to wave their “3G” status before entering.

“Usually, it’s a balagan (Hebrew slang for ‘mess’) and it’s beautiful,” said Erdmann. “This year, we don’t have the balagan. It’s regulated from both sides, but it works.”