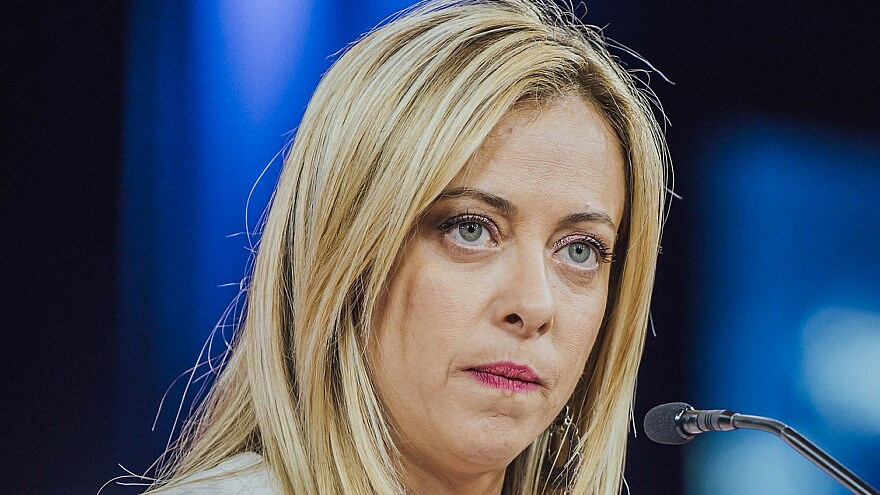 (September 28, 2022 / Israel Hayom) It appears that history is about to be made in Italy: Giorgia Meloni, the 45-year old leader of the national conservative party Fratelli d’Italia (Brothers of Italy), who has pledged to fight mass immigration and Islamization and has been very critical of the European Union, is poised to become the country’s first female prime minister.

Speaking with Israel Hayom, Meloni lashes out at those who engage in anti-Israel and anti-Semitic rhetoric, which is now a common feature in left-wing circles.

Q: Some members of your party come from Benito Mussolini’s family. The party has connections to the National Alliance—which emerged from the Italian Social Movement. What do you say to all those who accuse your party of neo-fascism?

These are ridiculous accusations, coming from a desperate left without arguments. But I don’t want to dodge the question, because I know how delicate it can be to your readers. Fratelli d’Italia is part of the evolving path of the Italian democratic right and, since its foundation, it has gathered personalities from other center-right parties, from the Catholic and liberal worlds. Those who, like me, pursue that route, have handed fascism over to history for decades now, firmly condemning the loss of democracy, the outrageous anti-Jewish laws and the tragedy of World War II.

Many of us have previously held government roles. I myself was the youngest minister in republican history. We have all sworn the constitutional oath. Everyone knows that we have never been a threat to democracy and obviously we do not become one now, though we are certainly “dangerous” to the power system of the Italian left, which has been in government for years without winning the elections. The difference between us and them is that I don’t spend my days remembering that, just over 30 years ago, many leftists were members of the strongest pro-Soviet party in the West. It is enough for me to list all the damage done by the left-wing governments today, without having to dig into the past.

Q: Have you ever visited Israel? Are you planning to do so soon?

Yes, certainly. I was on an official visit to Israel when I was serving as minister during the last Berlusconi government. It was a very significant mission, with the moving visit to Yad Vashem—a conscience-shaking experience. I will certainly return to Israel, hopefully soon. It was something I was considering due to my role as president of the European Conservative Party, of which Likud friends are also members. But the war in Ukraine, the political crisis in Israel and then the early elections in Italy as well have changed the agenda. I hope to return there as soon as possible, this time as head of government, to discuss together with the new Israeli government about joint collaborations and strategies, starting with those for the supply of natural gas through the eastern Mediterranean Sea.”

Q: What is the importance of a Jewish state to you?

Israel represents the only fully-fledged democracy in the broader Middle East and we defend without any reservations its right to exist and live in security. I believe that the existence of the State of Israel is vital and Fratelli d’Italia will make every effort to invest in greater cooperation between our countries. After all, this has been the friendly attitude that the Italian center-right has always held towards Israel whenever it has been in government. On the other hand, the left cannot say the same, not traditionally and neither in this election campaign, which has brought to light repeated incidents of left-wing candidates being caught writing anti-Semitic-flavored posts on their social media.

Q: Do you see calls to destroy Israel militarily or through boycotts as a continuation of traditional anti-Semitism?

Yes, and I also think that one of the most common manifestations of anti-Semitism today is anti-Israel propaganda, which Jews in Europe are most likely to encounter online. Jews in Europe are also subjected to the threat coming not only from far-left and far-right factions, but especially from radicalized Islamic immigrants who feed on resentment with regards to Israel. I recall the recent death of young Jeremy Cohen, who was trying to flee an anti-Semitic attack in the suburbs of Paris when he was killed by a tram. Because the tragedy would have drawn attention to the failure of integration policies, few European media outlets chose to report it. Therefore, as European conservatives and Fratelli d’Italia, we strongly support the new European Union strategy against anti-Semitism. Israel is and ought to continue to be a crucial ally of the European Union in the endeavor to eradicate this evil worldwide. We support efforts to increase young students’ understanding of Jewish history, religion and culture. This will support the elimination of societal prejudices and the full acceptance of Jewish customs in Europe.

Q: Will a government headed by you recognize Jerusalem as Israel’s capital and move the Italian embassy from Tel Aviv to Jerusalem?

This is a very sensitive issue, on which I think the next Italian government, like all those before it, will have to act in synergy with our partners in the European Union.

Q: Italy has close economic relations with Iran. How, in your opinion, should the West prevent Iran from becoming a military nuclear power and how can Italy contribute to it?

Sanctions have had a heavy impact on many Italian companies that had built strong economic ties with Iran. Nevertheless, it is certainly not time for second thoughts unless certain conditions are met. Indeed, we are extremely concerned about Iran’s role in the region, its ongoing rapprochement with Russia and China, its continued support for Hezbollah, which continues to threaten Israel’s security, as well as the IAEA’s report indicating that there are insufficient effective controls over Iran’s missile development. Without additional assurances for Israel, which is reasonably anxious about the timing of uranium enrichment required to create the atomic weapon, we believe it will be difficult to revive the 2015 deal. We firmly supported the Abraham Accords as a means of maintaining regional stability and curbing Iran’s aggressive foreign policy; therefore we believe they should be further implemented.

This is an edited version of an article originally published by Israel Hayom.