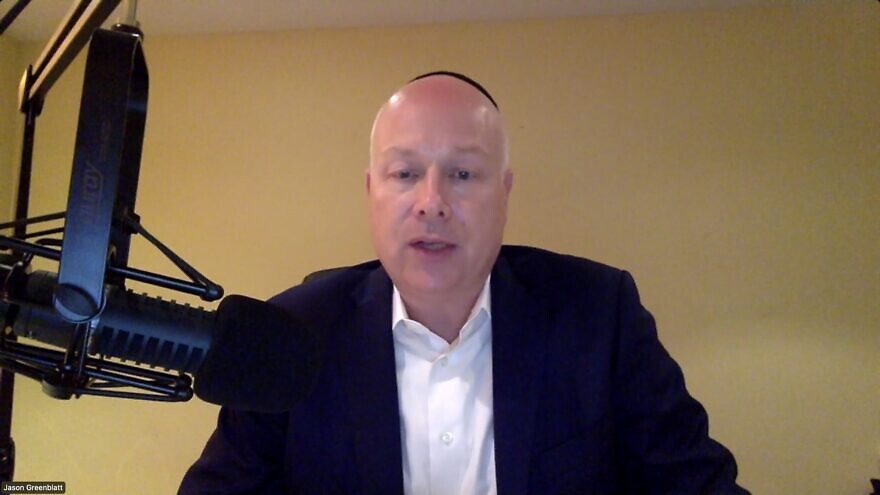 (August 26, 2022 / JNS) Former White House Middle East Envoy Jason Greenblatt recounted some of the details behind the Trump administration’s efforts with Israel under Prime Minister Benjamin Netanyahu to pen the Abraham Accords, signed two years ago next month, as well as prospects for peace with the Palestinians during a Zoom discussion on Thursday.

The 45-minute discussion was hosted by Shoshana Bryen, senior director of the Jewish Policy Center, in coordination with the Republican Jewish Coalition, and focused on Greenblatt’s newly released book, In the Path of Abraham: How Donald Trump Made Peace in the Middle East—and How to Stop Joe Biden From Unmaking It.

Greenblatt worked at the start of the Trump administration as a special representative for international negotiations, having previously served as executive vice president and chief legal officer to former President Donald Trump and the Trump Organization. He was the chief architect of the “Peace to Prosperity” Mideast plan, which the Palestinians rejected, and was a key player in the development of the Abraham Accords.

The path that led to finalizing accords came from the realization that—despite what Arab leaders publicly said about Israel—their concern was that the United States had abandoned them for better relations with Iran when it concluded the Joint Comprehensive Plan of Action (JCPOA) in 2015.

Before the Palestinian Authority broke off relations with the United States in 2017, when the Trump administration announced it was moving the U.S. embassy to Jerusalem, Greenblatt said that there was still hope among administration officials that they could get the Palestinian Authority to the negotiating table with Israel without preconditions. Along the way, they communicated with leaders from neighboring Arab countries.

But while speaking to Arab leaders in the region, who maintained the traditional talking points of a two-state solution based on 1967 borders with eastern Jerusalem as the capital, American negotiators noticed what Greenblatt called “green shoots of a recognition that Israel is an important neighbor that could, in theory, become an important ally.”

The conversations changed from where the word “Israel” was taboo to talking about it outright, never in a pejorative way.

Despite being told that these countries would never make peace with Israel, he would leave the meetings agreeing to more than 90% of the issues.

In his book, Greenblatt said that the Gulf states had two reasons to rethink their positions on Israel. The first was that they were frightened by the Arab Spring; the second was America’s insistence that they adopt Western-style democratic standards.

The Trump administration, he said, did not feel that it was the responsibility of the United States to dictate to other countries “how to live their lives.”

Yet Greenblatt said America’s message still resonated with those nations because their leaders recognize that the world is changing around them, and they are continuing to make tremendous progress in modernizing while remaining a conservative society.

One example, he said, he now sees on trips to the area, especially in Saudi Arabia, is the involvement of women in business and government meetings.

The women, he said, were “not just sitting in the background taking notes, but taking [an active part],” he said. “The whole society is morphing, and we’re going to have to be patient and let them morph.”

‘They want nothing more than to destroy Israel’

Asked by a webinar attendee whether he believes that there is hope for a two-state solution, Greenblatt said that he did believe in the phrase “two-state solution” primarily because of security issues.

“If by two-state solution people mean a fully sovereign Palestinian state which Israel withdraws from and doesn’t get to do anything in terms of security to keep itself safe? Then I don’t believe it, because I think Gaza has shown us that left to its own devices, there will be Palestinians—I’m not saying all, I’m not saying Palestinians are terrorists, but the reality is the region has a certain segment of its society that will always want to destroy Israel. And not just Israel. Some of those people may also be against Arab governments, Arab monarchies … for different reasons,” he said. “But if it means asking a friend and ally—irrespective of my Judaism and my support for Israel for other reasons, ‘Hey, we know you’ve been under attack since the moment of your formation, but we’re asking you to take a leap of faith, withdraw from the land and hope for the best.’ No.”

But if the solution came in the context of rules ensuring the security of Israel, he was optimistic, though a lot had to change.

One of these things, he said, was that foreign-policy officials need to stop ignoring the Gaza-based terrorist organization Hamas.

“We have too many Palestinians suffering in Gaza who are ruled under the iron fist of Hamas; we can’t pretend that that’s not the case,” he said.

Even if the United States managed to get Israeli and Palestinian Authority leaders to negotiate and come to an agreement, there will still be a terrorist organization controlling Gaza that vows to destroy Israel.

“Until we fix that—or try to figure out how to fix that—or until Hamas changes its stripes, which is unlikely but not impossible, it’s very hard to envision,” he said.

Greenblatt’s main concern with the Biden administration’s Mideast policy is its desperation to enter the JCPOA, which he believes is naive and even dangerous.

Asked why he thinks the administration is insisting on the deal, Greenblatt gave two reasons.

The first is that the administration is naive to Iran’s ambitions in the region.

“They believe the Iranian regime wants what Americans want. They want a good life with their kids running around and picket fences and streets, playing soccer and prospering,” he said. “The Iranian regime doesn’t. They want nothing more than to destroy Israel, probably destroy … America if given the chance. And they want to take over all of the Middle East.

The second reason is that the Biden administration just wants to buy time on the issue and hope that Iran does not develop a nuclear weapon in the next two years.

“But we have to face our kids and our grandkids,” said Greenblatt. “Do you want to face them and say, ‘Well, we buried our heads in the sand for a couple of years, and congratulations, now it’s your problem.’ ”