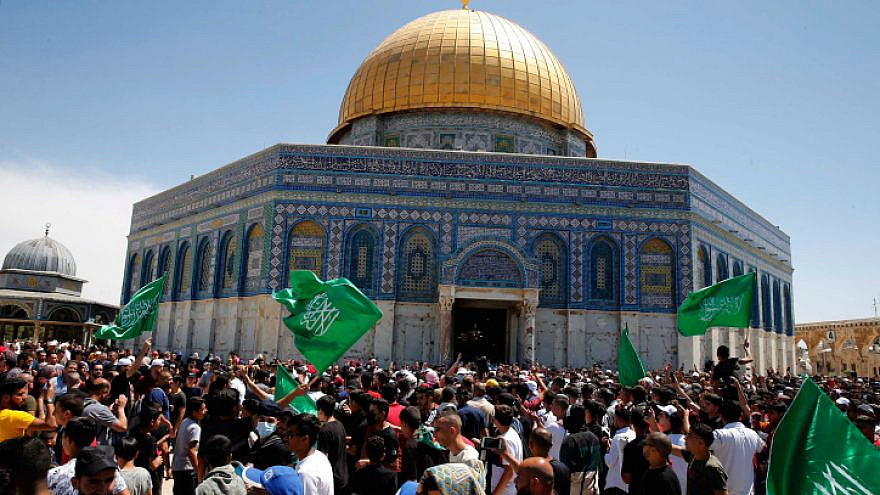 People hold Hamas flags as Palestinians gather after performing the last Friday of Ramadan to protest over the possible eviction of several Palestinian families from homes on land claimed by Jewish settlers in the East Jerusalem neighborhood of Sheikh Jarrah, May 7, 2021. Photo by Jamal Awad/Flash90
Republish this article
812 WORDS
Spread the word.
Help JNS grow!
Share now:

(May 12, 2021 / JNS) As the Israeli military continued striking targets in Gaza on Wednesday in response to a two-day onslaught of rockets launched by Hamas into the Jewish state, the question many are asking is why did the terror group decide to act now?

Hamas, an offshoot of the Muslim Brotherhood, often acts pragmatically, turning on and off the violence to achieve its objectives.

It behaves differently from pure jihadist groups like Al-Qaeda or the Islamic State (ISIS), which tends to resort to violence without the concept of negotiated solutions or ceasefires. Muslim Brotherhood movements are more in tune with reality on the ground and manipulating the international media to defend its cause.

According to a tweet by Yoni Ben Menachem on Wednesday, Hamas has set conditions for a ceasefire, including demands for Israel to release all those detained in recent riots, not to enter Al-Aqsa Mosque, and not to remove families from the Sheikh Jarrah neighborhood in eastern Jerusalem.

“Hamas is encouraging this escalation, riding the religious winds of Ramadan,” Ido Zelkovitz, head of the Middle East Studies program at the Max Stern Yezreel Valley College between the cities of Afula and Nazareth, told JNS.

Arabs began rioting in eastern Jerusalem about a month ago, after municipal courts there ruled to evict Palestinian residents illegally living on Jewish-owned land in the Sheikh Jarrah neighborhood. The riots spread across the city and the country, heightening with the end of Ramadan, the approach of Jerusalem Day. Israel’s Supreme Court delayed a hearing on the case amid the rising tensions.

It also happened in the backdrop of P.A. leader Mahmoud Abbas abruptly canceling planned elections scheduled this month—some 15 years after he was tapped for his first term in January 2006. Taking advantage of the trifecta, Hamas escalated the situation by firing rockets at Israel.

The violence is meant “to draw the support Hamas was denied by the Palestinian Authority’s cancellation of Palestinian elections and to portray itself as the defender of Jerusalem,” assessed Zelkovitz, a senior research fellow at the Ezri Center for Iran & Persian Gulf Studies at the University of Haifa.

The current escalation is also a direct result of the struggles taking place in the eastern part of the city since the 2017 rioting over the implementation of metal detectors around Muslim holy sites, he explained.

“Hamas made a miscalculation and thought that the instability of the Israeli political arena would work in its favor,” said Zelkovitz.

However, this proved not to be the case, as Israel’s leaders closed ranks against the threat, and the army responded quickly.

‘This is something new’

Kobi Michael, a senior researcher at Israel’s Institute for National Security Studies, told JNS that the violence in Jerusalem should not have come as a surprise to the country’s leadership since “it was very well-prepared in advance.”

Eastern Jerusalem is a convenient arena for Hamas and the P.A. to battle Israel since it serves their interests in defending the Islamic holy sites and Arab residents, he said.

“Hamas is the leading player behind the violence and created a new equation by bringing the issue of Jerusalem and the holy sites into the public discussion and showing itself to be their defender,” explained Michael.

It also succeeded in embarrassing the P.A. and Abbas by portraying them as incapable of defending Jerusalem and the holy sites, he said.

Further, Hamas has challenged Israel’s claim to Jerusalem and presented an ultimatum to Israel to withdraw its forces from the Temple Mount or face attacks. “This is something new and set new rules to the game. And so, Israel needs to reset the rules,” assessed Michael.

Another significant achievement was that the violence has put a halt to Israeli-Arab integration, mainly witnessed in recent months with the new participation of Arab parties in the political arena. The sensitivity of the Jerusalem issue for Palestinians created an atmosphere that could quickly escalate.

“Hamas is not too concerned about Israeli retaliatory strikes since they know they will be able to recuperate its military capabilities as soon as the next ceasefire is declared,” said Michael.

While relative quiet has marked the past year of the coronavirus pandemic, it seems that Hamas had decided the time is ripe again for aggression. It may be a test for the new administration in the United States and Israel, which has been unable to form a government for the fourth time in two years. Or it may be a diversion from the economic hardships that Gaza residents are feeling after a year of stagnation and shortages.

Still, the question lingers: Will Israel continue to accept being under repetitive threats and firepower whenever Hamas feels the whim to attack?

Michael responded by saying that “if Israel does not make a game-changing move, such as toppling Hamas from power, we can expect more rockets in the future.”