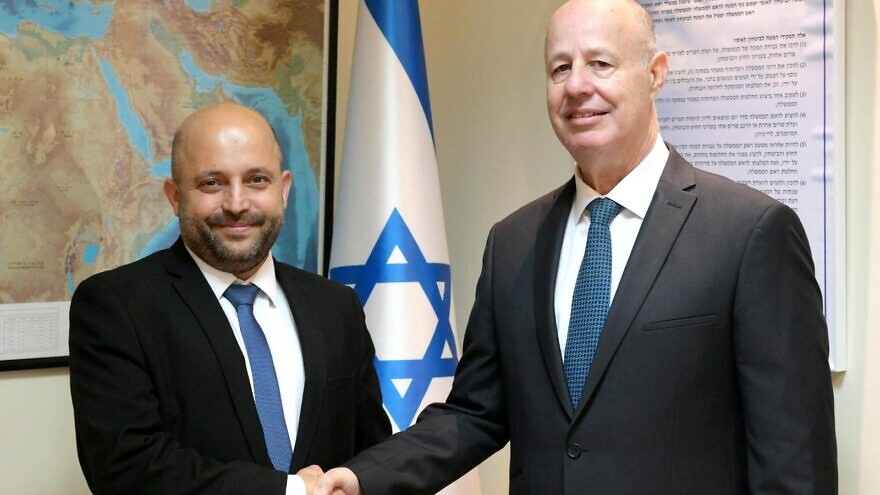 (January 11, 2023 / JNS) Former Israeli Minister Tzachi Hanegbi stepped into his new role this week as head of the National Security Council, following a transitional phase with his predecessor Eyal Hulata that included an in-depth study of all security and diplomatic issues.

As part of the transition, the two met together with Prime Minister Benjamin Netanyahu and discussed sensitive issues.

Netanyahu thanked Hulata for his contribution over the years to the security of the state and for serving in the post since August 2021. Hulata dealt with critical national security issues such as advancing strategic relations with the Biden administration, formulating and advancing policy on the Iranian nuclear issue, and promoting and developing the normalization agreements with Arab countries.

Hulata wished Hanegbi success and thanked the National Security Council personnel for their dedication and professionalism, adding that he was sure they would continue their dedicated work in support of the security and diplomatic activity of the prime minister

Netanyahu appointed Hanegbi, a confidante and Likud Party veteran, to the position in December. He has held several ministerial posts throughout his career, including the health, communications and justice portfolios. He also served as chairman of several Knesset panels, including the Foreign Affairs and Defense Committee and the Finance Committee.

One of Hanegbi’s first orders of business will be to prepare for the visit, likely next week, of his American counterpart Jake Sullivan, with the Iranian nuclear threat topping the agenda.

Sullivan said on Monday that the topic would be a “substantial topic of conversation” during his upcoming trip.

Netanyahu on Tuesday warned the “terror regime” in Iran not to cross the Jewish state’s “red lines,” in remarks during a visit to the Israel Defense Forces Northern Command.

“And those who need a reminder of our red lines will receive it,” Netanyahu added.