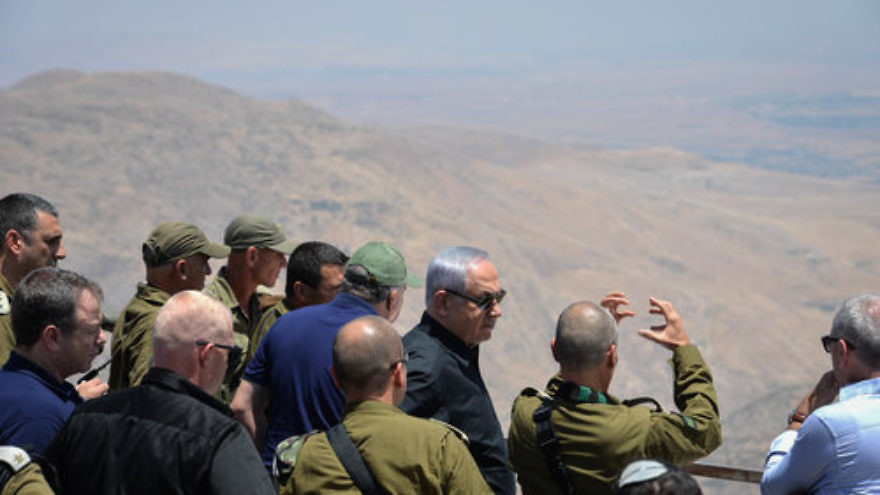 (January 10, 2023 / JNS) Israeli Prime Minister Benjamin Netanyahu on Tuesday warned the “terror regime” in Iran not to cross the Jewish state’s “red lines,” in remarks during a visit to the Israel Defense Forces Northern Command.

“And those who need a reminder of our red lines will receive it,” he added.

Defense Minister Yoav Gallant, who accompanied Netanyahu, similarly vowed to prevent Tehran from establishing a permanent military presence in Syria, as well as to curb the flow of Iranian arms to Hezbollah.

“The quiet in the north is an important goal. Therefore, along with maintaining calm, we will act powerfully against any attempt to harm Israeli citizens and IDF soldiers,” said Gallant.

It comes as Strategic Affairs Minister Ron Dermer is in Washington for high-level meetings with American officials that will focus on Iran’s nuclear program.

Dermer, who served as Israel’s ambassador to the United States from 2013 to 2021, is the first member of Israel’s new government to travel to Washington, as Jerusalem appears readying to ramp up a pressure campaign on the Islamic Republic.

On Monday, Netanyahu addressed the matter in a video call to the AIPAC Political Leadership Forum, saying, “The time has come for Israel and the United States, along with other countries, to stand together, and I look forward to discussing this with President [Joe] Biden and his team. Today, more people agree on the issue than ever before.”

U.S. National Security Advisor Jake Sullivan said on Monday that the Iranian nuclear threat would be a “substantial topic of conversation” during his upcoming visit to Israel.

Sullivan is expected to arrive in the Jewish state next week, although the precise date has yet to be finalized.