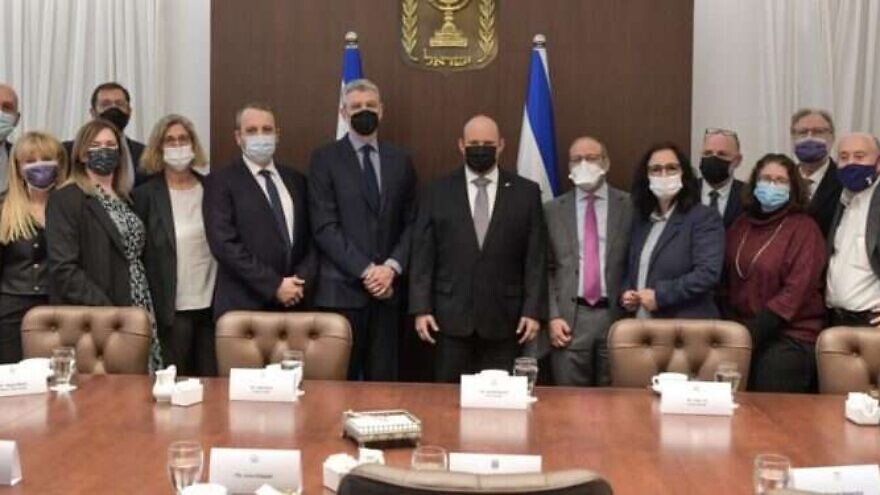 (March 1, 2022 / Israel Hayom) Israel’s prime minister met on Monday with the heads of the Reform and Conservative movements to advance the framework agreement for egalitarian prayer at the Western Wall. The meeting, which came after a nearly six-year rift between the sides following the shelving of the plan by former prime minister Benjamin Netanyahu, was described by participants as “cordial,” but drew heavy fire from haredi lawmakers.

Rabbi Rick Jacobs, president of the Union for Reform Judaism, and Rabbi Jacob Blumenthal, chief executive of the United Synagogue of Conservative Judaism, said after the meeting: “We expressed our unconditional support for the State of Israel and made clear our expectation of the prime minister that he take steps to show he is committed to the State of Israel indeed being home to all streams (of Judaism), in Israel and the Diaspora.”

Anna Kislanski, the CEO of the Israel Movement for Reform and Progressive Judaism, said it was a “historic meeting from the perspective of recognition of the liberal streams of Judaism in Israel and the Diaspora. The prime minister spoke with us at length and acknowledged our need to pray in our own way at the Wall without partitions [between men and women] and in an egalitarian and respectful manner.”

Haredi lawmakers, however, were unsparing in their criticism.

“It’s not for nothing that these sides came together, as they are two birds of the same feather,” said Knesset member Moshe Gafni, chairman of the United Torah Judaism Party.

MK Uri Maklev (UTJ) called the meeting “another absurd performance from the prime minister, who is incapable of addressing what’s important, only focusing on the most inconsequential of issues.” He added, “The prime minister does not project stability and is selling his values like a leaf in the wind.”

Fellow UTJ lawmaker Yakov Asher said, “After embarrassing himself in presuming to mediate between Russia and Ukraine, Bennett is trying to mediate the Reformists’ destructive invasion into Israel’s religious institutions.” The Bennett government, he said, “is turning itself into a red carpet for the destroyers of religion to walk across and lay waste to the Jewish character of the Land of Israel.”

Rakefet Ginsburg, CEO of the Conservative-Masorti Movement in Israel, called for compromise.

“We must ensure as a society that Jewish men and women from all across the globe feel at home here and can pray according to their customs and beliefs. Compromise is not a limitation; it is a way to preserve strength in a diverse society,” said Ginsburg.