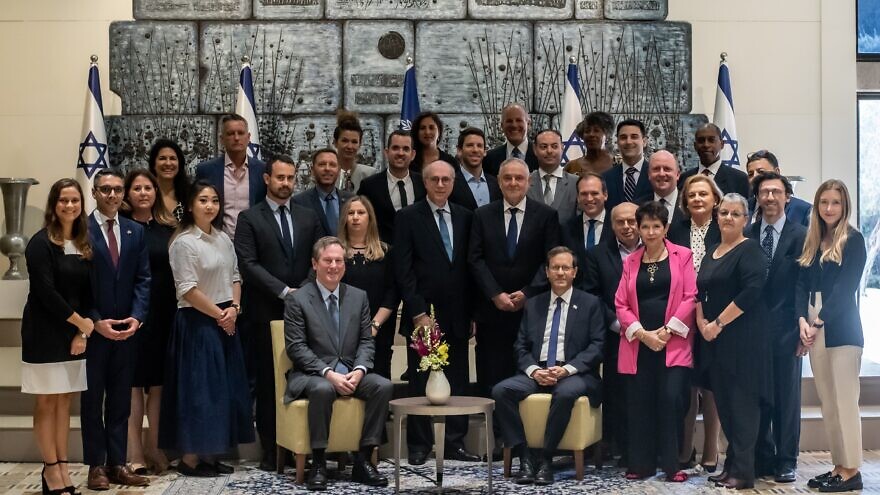 (October 25, 2022 / JNS) Israeli President Isaac Herzog on Monday lamented the rise of Jew-hatred across the globe, during a meeting at his official residence in Jerusalem with members of the Combat Antisemitism Movement’s (CAM) Advisory Board.

“We need collaborations to combat anti-Semitism, and I commend the work CAM does and hope it goes from strength to strength,” said Herzog, according to a statement from the organization.

The delegation was led by CAM founder Adam Beren and new Advisory Board chair Natan Sharansky, and included heads of prominent Jewish and non-Jewish organizations, former diplomats and academics.

“Almost one thousand governments and organizations have adopted the International Holocaust Remembrance Alliance’s (IHRA) working definition of anti-Semitism, which is a core focus of CAM’s work,” said Beren. “Anti-Semitism is no longer the purview of one side or the other on the political or ideological spectrum, so we need to have a very clear definition of what constitutes anti-Semitism for government and law enforcement agencies around the world.”

For his part, Sharansky said that growing anti-Semitism has been fueled by world events.

“After the two recent global events, Covid-19 and the invasion of Ukraine, we have witnessed a significant rise in anti-Semitism and conspiracy theories about Jews,” said Sharansky, adding: “The digital space is a major contributing factor which multiplies and amplifies these messages of hate. To combat this, we need a united global response every day and at all times, because it is largely a problem of information, so we have to ensure the right messages are getting across.”

At the end of the meeting, Herzog was honored by CAM for his leadership in the fight against Jew-hatred and his advocacy on behalf of Jewish communities worldwide during his decades of public service.

CAM is a global coalition engaging more than 600 partner organizations and nearly two million people from a diverse array of religious, political, and cultural backgrounds in the common mission of fighting the world’s oldest hatred.