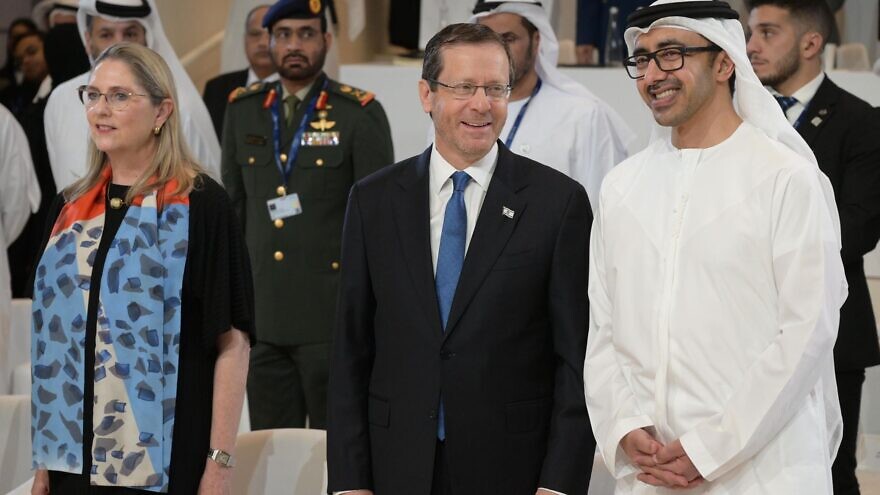 (December 5, 2022 / JNS) Israeli President Isaac Herzog on Monday touched down in the United Arab Emirates, kicking off the second day of his state visit to the Gulf.

“As humanity gazes up at the stars, I wish to bring this discussion back to earth because I believe that the greatest promise of space exploration lies not only in discoveries on distant planets but also in rediscovering our potential for collaboration here on the blue planet we call home,” said Herzog.

“Let us move onwards and upwards, not with the competition of a cold war, but with the cooperation of our warm peace. Let us harness the power of space for the promise of Earth. Let us gaze at the heavens with our sights set firmly on our planet. Together, we can take space exploration to new heights and save our planet from new depths. Today we can say: The sky is just the lower limit!” Herzog added.

The Israeli president in the afternoon met with the ruler of Abu Dhabi and president of the UAE, Sheikh Mohamed bin Zayed Al Nahyan, in their fourth meeting since Herzog took office in July 2021.

“The Abraham Accords are a national consensus in Israel on all sides of the political spectrum,” said Herzog, referring to the U.S.-brokered September 2020 agreements that normalized relations between the Jewish state and several Arab countries.

Herzog added: “Now we have to…upgrade ties between us even more, to strengthen them and to bring more nations into the Abraham Accords.” 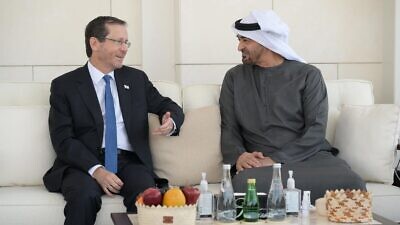 Herzog was last in the UAE in May, when he traveled to the Gulf nation to convey his condolences on the passing of former ruler Sheikh Khalifa bin Zayed Al Nahyan.

On Sunday, he became the first Israeli head of state to make an official visit to Bahrain.

He also participated in a forum with Crown Prince of Bahrain Salman bin Hamad Al Khalifa, also the country’s prime minister, at the Bahrain Economic Development Board.

“The Abraham Accords unleashed energy that existed underneath but had to be realized between the nations, and we truly feel in the family. We truly feel that we are meeting our cousins, our brothers and sisters,” said Herzog, adding: “I bring a message of goodwill and congratulations from the people of Israel to the people of Bahrain, hoping to create more business contacts and other relations in all areas of life so we can show the entire region why peace is so important.”

Today I visited the Bahrain Economic Development Board with a senior economic delegation. Israeli-Bahraini economic cooperation will continue to benefit both our countries through investment, employment, opening up new markets and many diverse areas of business and trade. ???????????????????? pic.twitter.com/HcCL1Q2eH7

Herzog is scheduled to return to Israel on Monday evening.