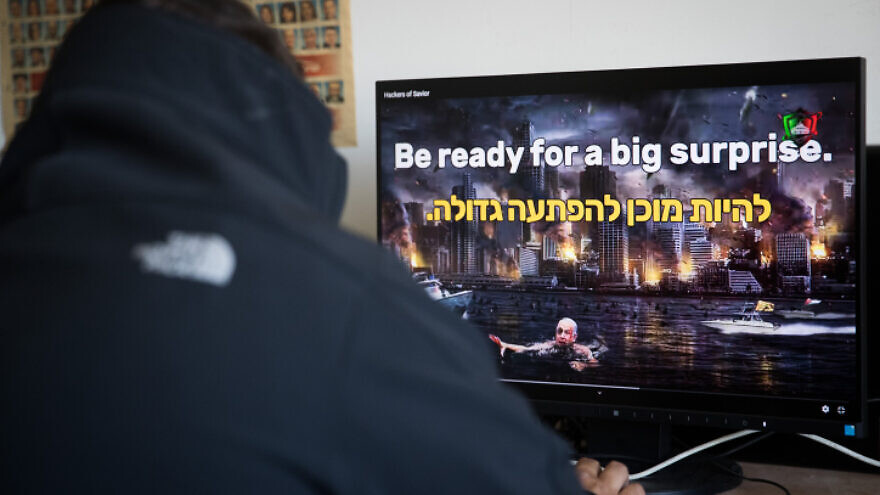 A man watches a video on an Israeli website hacked by a group calling itself the "Hacking Saviours" in an office in Jerusalem on May 21, 2020. Photo by Yonatan Sindel/Flash90.
Spread the word.
Help JNS grow!
Share now:

The information—stolen and released on the web by a group calling itself “Anonymous1islamic”—is still available online for anyone to see, according to Channel 12 News.

A review of the data by Israeli cyber security company Intsights revealed that the information, which was discovered in May, is not current, but rather was collected during previous cyber attacks on Israelis.

Ariel Einhorn, head of research at Intsights, told Channel 12 News that the hack in question was part of a coordinated campaign called #OpIsrael. The goal of the campaign, said Einhorn, is to “continue to threaten Israeli citizens, and to raise awareness about the struggle against the State of Israel.”

He said that the publication of the data “could be a response to Israel’s talk of annexation [of the Jordan Valley and parts of the West Bank],” and added that as the issue of Israel extending its sovereignty in those areas increasingly enters public consciousness, such cyber attacks will intensify.

The discovery of the data theft comes as reports emerge of an escalating cyber war between Iran and Israel. On April 24, the computers controlling an Israeli pumping station were hacked, reportedly by Iran, in an attempt to raise the chlorine content in the country’s water supply to dangerous levels. On May 9, the computer systems of Iran’s Shahid Rajaee Port were targeted in what The Washington Post claimed was a retaliatory Israeli attack.

Tehran denies involvement in the former, but holds Jerusalem responsible for the latter.