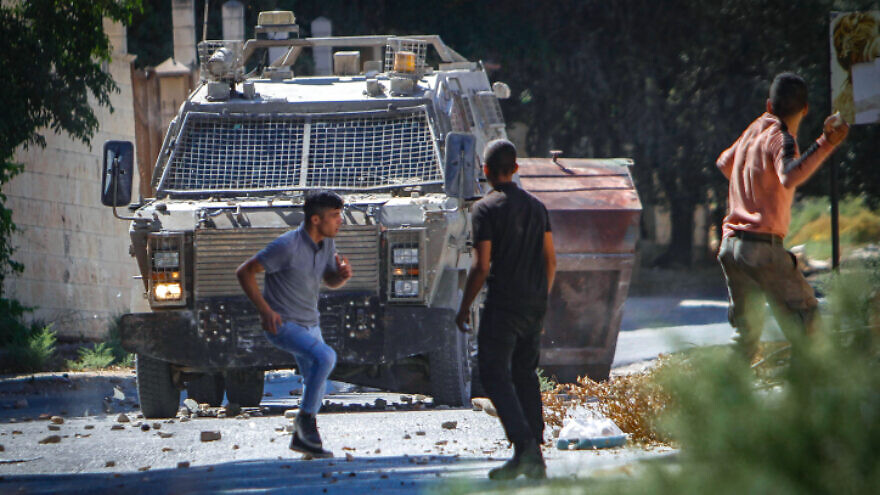 (September 29, 2022 / JNS) The Israel Defense Forces launched a search for a terrorist cell in Judea and Samaria on Thursday, following a drive-by shooting on an Israeli vehicle from a passing Palestinian car at the Adorayim Junction, in the Hebron Hills area, on Wednesday night.

The Israeli vehicle sustained damage but there were no injuries, the IDF Spokesperson’s Unit stated, adding that security forces were sweeping the area.

On Wednesday morning, the brother of a terrorist who murdered three Israelis in Tel Aviv on April 7 was killed in Jenin, along with three other Palestinian gunmen, during a firefight with Israeli forces.

Rahman Hazem had been on the run from Israeli security forces since the April 7 attack, together with his father, Fathi Hazem. The Border Police identified a second casualty as Muhammad Aluna, a resident of Jenin. Both Hazam and Aluna took part in a shooting attack near the Palestinian village of Jalamah on September 13, and had plotted additional, imminent attacks, according to the Border Police statement.

IDF Chief of the General Staff Lt. Gen. Aviv Kochavi held a situational assessment in the military’s Central Command Headquarters in Jerusalem on Wednesday following the incidents in Jenin.

“We will continue to prepare for every scenario, and we will act as necessary at any time and in any place in order to ensure the security of the residents of the State of Israel,” he said.

He praised the IDF’s defensive and offensive operations in the sector, describing the military’s ability to thwart attacks as highly successful.

If the IDF needs to deploy two more battalions, or stop all military training to make more units available for security operations in Judea and Samaria, or call up reserves, it will do so, he vowed.

Meanwhile, Army Radio reported on Thursday that the IDF has not yet used armed drones in Judea and Samaria due to concerns of harming noncombatants. The report quoted IDF sources as saying that while ground operations have so far proven effective, the military is not ruling out using armed drones in the future.

“The sector that most disturbs the defense establishment is Nablus [known in Israel as Shechem], despite the widespread activities in Jenin,” said the report. “The most significant concerns about terror attacks center on Nablus, and that’s where pressure is being applied on PA security forces to boost their activities.”