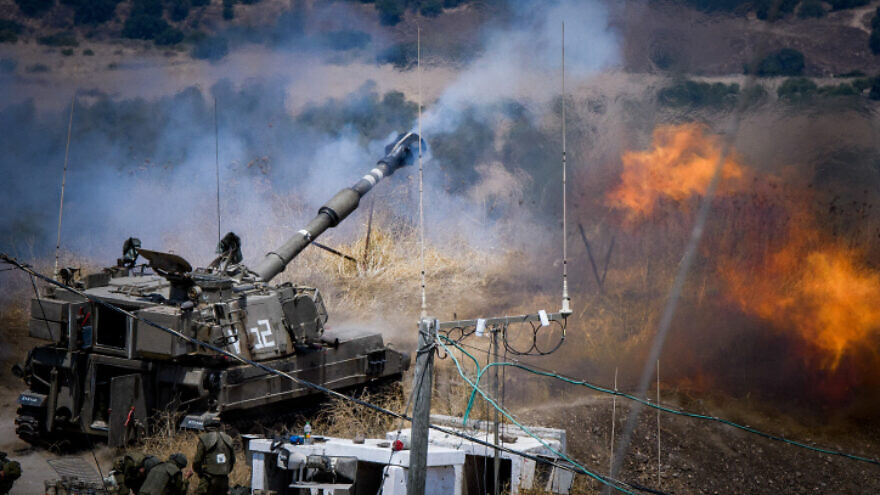 (April 25, 2022 / JNS) The Israeli military responded with artillery fire on Sunday night after a rocket was launched into Israel from southern Lebanon, the Israel Defense Forces said in a statement.

As calculations of the rocket’s trajectory indicated that it would come down in an open area, no sirens were triggered, and the Iron Dome air-defense system did not intercept it, according to the IDF.

The IDF Artillery Corps fired “tens” of shells at the launch site and at open areas in Southern Lebanon, and an “infrastructure target” was also attacked, the military said.

There were no reports of casualties or damage, and no alert status for the region was declared.

The London-based Arabic-language Rai Al-Youm newspaper reported on Sunday that a senior Hamas figure had warned that in the event of new conflict erupting between the terror group and Israel, “a front will also be opened from southern Lebanon.” The Hamas figure also threatened an “intifada of 1948 Arabs [Arab Israeli citizens].”

However, there was no information linking the terror group to Sunday’s rocket attack.

According to the article, which was translated by Israel’s Kan news, the Hamas source warned that the current situation was “delicate” due to recent tensions surrounding the Temple Mount and the Al-Aqsa mosque in Jerusalem’s Old City.

The first in a series of violent riots on the Temple Mount in recent weeks took place on April 15, during the second week of Ramadan. Israeli forces entered the Al-Aqsa mosque to remove rioters who had barricaded themselves inside. Some 300 Arabs were arrested. Minor clashes followed on Sunday.

On Wednesday, rioters threw firebombs from inside the mosque, setting fire to the carpet at the entrance. Greater violence erupted on April 21 and April 22, as rioters began throwing stones and shooting fireworks at security forces.

Speaking with reporters at a press briefing on Sunday, Israeli Foreign Minister Yair Lapid laid the blame for the unrest squarely at the feet of Hamas and other terror groups.

“In the past three weeks, there has been a dangerous effort underway in Jerusalem during Ramadan. Terrorist organizations have been trying to hijack the Al-Aqsa mosque in order to create an outbreak of violence in Jerusalem and from there a violent conflict across the country,” said Lapid.

“Hamas and [Palestinian] Islamic Jihad extremists burst into [the] Al-Aqsa mosque in the early mornings, again and again. They brought weapons into the mosque. They threw rocks and explosives from within it and used it as a base to incite violent riots,” he said.