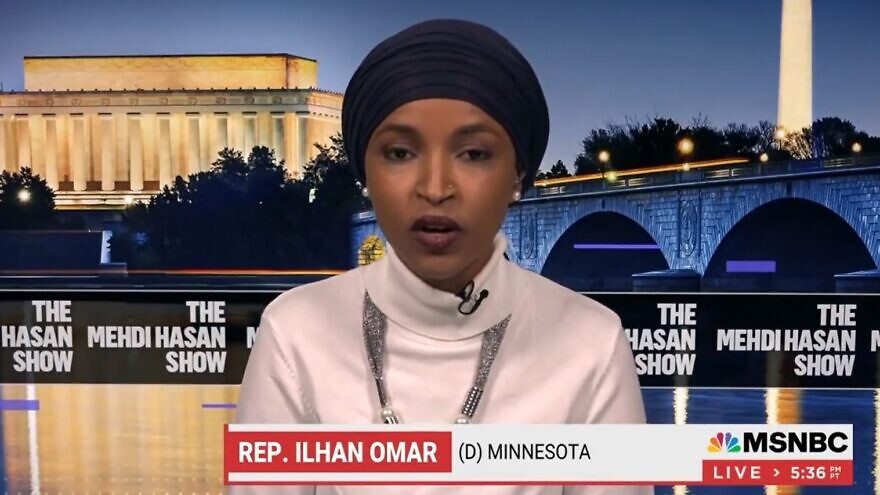 “Anti-Semitism is on the rise and all of us have a responsibility to condemn it,” Omar said. “To continue to have someone, a former president with his platform, continuously speaking to his white supremist [sic] base in such a language—it’s very scary and dangerous and we have to condemn it.”

Reaction on Twitter, where Omar’s comments were posted, accused her of “audacity” given the anti-Semitic comments she has made in the past, notably in Feb. 2019 in which she accused Israel’s allies of having been paid off for their support, tweeting, “It’s all about the Benjamins baby,” in a reference to American $100 bills, on which U.S. founding father Benjamin Franklin features.

Responding to the overwhelmingly negative Twitter response, show host Hasan tweeted: “For those falsely suggesting Rep. Omar was my main guest on this topic—she wasn’t! She came on to talk about 1/6 [the Jan. 6, 2021 incident at the U.S. Capitol] much later in the show—I did in fact have a Jewish American voice to discuss anti-Semitism, at the top of the show.”

Several other Democratic congresspeople, Jewish groups, and the White House also condemned Trump’s remarks. “Donald Trump’s comments were anti-Semitic, as you all know, and insulting both to Jews and our Israeli allies,” White House spokesperson Karine Jean-Pierre told reporters in a briefing Monday.

Trump posted on his social media platform, Truth Social, Sunday that “somewhat surprisingly,” evangelicals are more appreciative of what he has done for Israel as president than “people of the Jewish faith.”

“U.S. Jews have to get their act together and appreciate what they have in Israel—Before it is too late,” he said.

Trump noted that Jews in Israel are different and there he has the “highest approval rating in the world—could easily be P.M.!”