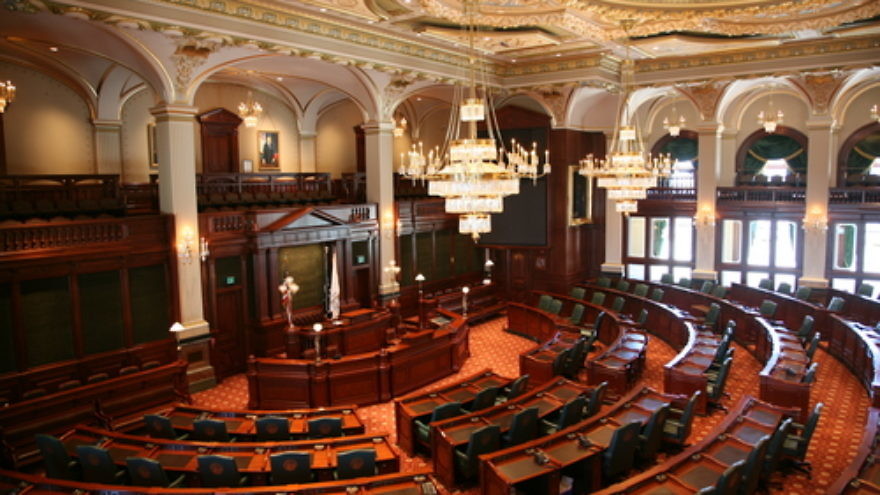 Click photo to download. Caption: The chamber of the Illinois House of Representatives, which on Monday unanimously (102-0) passed legislation that bans state pension funds from including in their portfolios companies that participate in the Boycott, Divestment and Sanctions (BDS) movement against Israel. Credit: Daniel Schwen via Wikimedia Commons.
Republish this article
694 WORDS
Spread the word.
Help JNS grow!
Share now:

(May 19, 2015 / JNS) Illinois on Monday became the third state in a month to pass legislation formally opposing the Boycott, Divestment and Sanctions (BDS) movement against Israel. But going further than non-binding anti-BDS measures in Tennessee and Indiana, the Illinois bill took concrete action against those who boycott the Jewish state.

The legislation—which unanimously passed both the Illinois House (102-0) and Senate (49-0), and will be signed into law by Governor Bruce Rauner—prohibits state pension funds from including BDS-participating companies in their portfolios.

“Illinois is the first state to take concrete, legally binding action against the Boycott, Divestment and Sanctions campaign, providing a legislative model for the rest of the country,” said Jacob Baime, executive director of the Israel on Campus Coalition.

“It means bullying, deception, and slander,” Shapiro said. “Americans understand that the real goals of BDS are to isolate, weaken, and ultimately destroy the only Jewish state. They understand and they are saying ‘no’ to undermine a loyal ally and the only democracy in the Middle East.”

Shapiro added that the significance of the Illinois legislation’s unanimous passage “should not be underestimated.”

“Illinois officials can’t agree on anything,” she said. “But on this issue, there is unanimous agreement, sending a clear message to the BDS movement and its supporters that their lies are not welcome in Illinois.”

DePaul University Professor of Law Steven Resnicoff, who also serves as director of the Center for Jewish Law & Judaic Studies at the Chicago-based school, told the Salomon Center, “The Illinois legislature is declaring that it recognizes the BDS movement for what it is: a movement motivated predominantly by a raw hatred of Jews.”

“The founders and principal proponents of BDS, even when they speak in English but especially when they communicate in Arabic, often express sentiments that dovetail with those in the charter of terrorist group Hamas, namely, the desire to accomplish the elimination of the political entity known as the State of Israel but also the murder of Jews,” Resnicoff said.

The professor said that “no matter what spin BDS proponents attempt to put on this development, the overwhelming enactment of this statute will deal a crushing blow to their morale.” The ongoing state-by-state legislative momentum against the BDS movement, said Resnicoff, will “constitute an effective exclamation point.”

Indeed, according to the Christian Zionist organization Proclaiming Justice to the Nations (PJTN), which initiated the recent anti-BDS bill in Tennessee, what the group calls “anti-BDS campaigns” are underway in 17 states. But PJTN’s current list of those states—published at http://www.pjtn.org/anti-bds-states, with “anti-BDS states” hyperlinked among a list of all 50 U.S. states—does not include Illinois. Also not highlighted on the PJTN list is Maryland, whose legislature passed codified language within the state’s 2014 budget that articulates an official policy to “oppose Maryland public institutions’ support of the movement known as Boycott, Divestment and Sanctions, designed to delegitimize the democratic State of Israel.” That means anti-BDS efforts have expanded to at least 19 states.

Regarding the Illinois legislation, the Jewish United Fund/Jewish Federation of Metropolitan Chicago (JUF) said that it “strategized closely with the Governor’s Office and Sen. Ira Silverstein and Rep. Sara Feigenholtz, the bill’s chief co-sponsors, to help ensure its successful passage.”

“At the core of the BDS movement is a quest to delegitimize Israel as a sovereign, democratic and Jewish state,” said JUF President Steven B. Nasatir. “This bipartisan legislation sends a strong message that Illinois will not tolerate such efforts.”

The Salomon Center reached out last week to Illinois-based American Muslims for Palestine for comment on the anti-BDS legislation. The group did not respond.