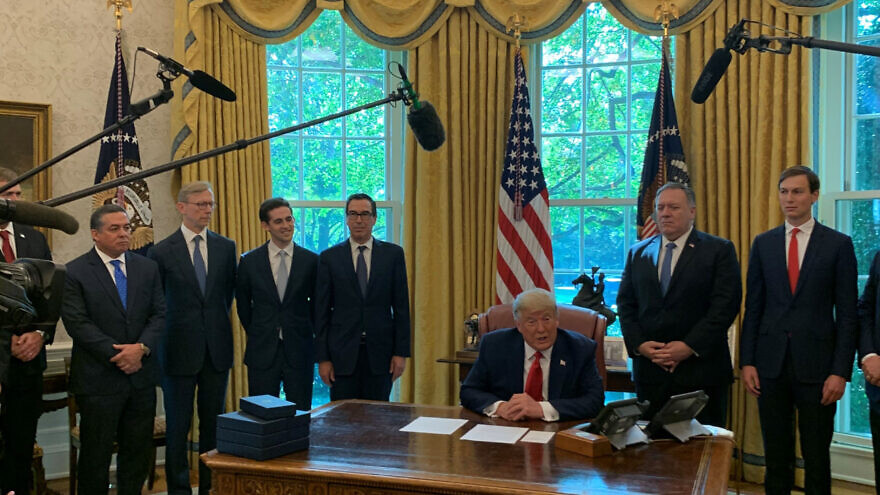 The move follows the White House announcement that Trump has informed Congress of his intent to remove Sudan from the U.S. list of State Sponsors of Terrorism, following Khartoum’s agreement to pay $335 million in compensation to victims of the Al-Qaeda attacks on U.S. embassies in Kenya and Tanzania in 1998, and on the destroyer USS Cole in 2000—attacks that American courts have ruled Sudan aided and abetted.

“We are expanding the circle of peace so rapidly. … This truly changes the region. It changes the lives of all our people for the better,” Israeli Prime Minister Benjamin Netanyahu told Trump by phone on Friday as Trump was surrounded by administration members, including U.S. Secretary of State Mike Pompeo, U.S. Treasury Secretary Steven Mnuchin and senior adviser Jared Kushner.

Also on the phone was Sudanese Prime Minister Abdalla Hamdok.

Kushner said the agreement will help reduce extremism, terrorism and anti-Semitism, noting that “these peace agreements are not as easy as President Trump and his team are making them look,” he said.

A joint statement by the three nations “agreed to the normalization of relations between Sudan and Israel and to end the state of belligerence between their nations.”

“In addition, the leaders agreed to begin economic and trade relations, with an initial focus on agriculture,” continued the statement. “The leaders also agreed that delegations will meet in the coming weeks to negotiate agreements of cooperation in those areas as well as in agriculture technology, aviation, migration issues and other areas for the benefit of the two peoples.”

It also stated that they “resolved to work together to build a better future and advance the cause of peace in the region. This move will improve regional security and unlock new opportunities for the people of Sudan, Israel, the Middle East and Africa.”

Sudan follows the United Arab Emirates and Bahrain, which normalized ties with Israel through signing the Abraham Accords on Sept. 15 in a White House ceremony. The two Gulf states were the first to normalize relations with the Jewish state. Jordan and Egypt made peace with Israel in 1994 and 1979, respectively.

Sudan cannot receive foreign aid until it is removed from the U.S. list of terrorism list, which it has been on since 1993 for allegedly granting refuge and assistance to the U.S.-designated terrorist group Hezbollah and Palestinian terrorists.

Sudan, an Arab-Muslim-majority country that borders Egypt to the south, has long been viewed as a hostile nation towards the Jewish state. Its rejection of Israel was made famous with the 1967 Khartoum Resolution, issued at the conclusion of the Arab League summit in the wake of the Six-Day War and declaring the “Three Nos”: no peace, no recognition, no negotiations.

However, the new government, keen on reforming the economy and expand international investment, sees friendlier ties with Israel as a step in improving relations with the United States. Sudan’s western neighbor, Chad, established ties with Israel in 2019, and South Sudan, which gained independence from Sudan in 2011, also has diplomatic relations with the Jewish state.