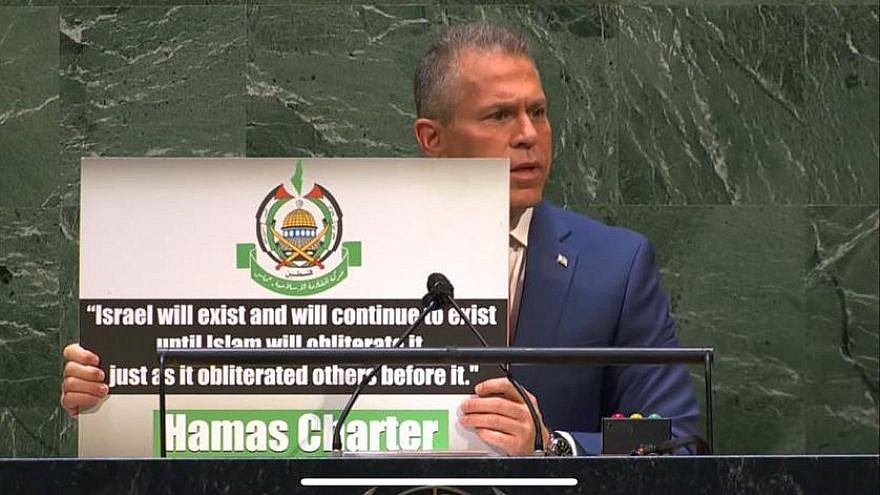 (May 21, 2021 / JNS) Hours before Israel announced a ceasefire between itself and the Gaza-based terrorist organization Hamas on Thursday, Israeli Ambassador to the United States and the United Nations Gilad Erdan said that member states condemning Israel for its actions in Gaza are choosing to side with terror and hurting the chances for peace in the region.

Erdan spoke at a hastily called special meeting of the U.N. General Assembly specifically focused on the Israeli-Palestinian conflict in between speeches from representatives of nations highly critical of Israel’s actions in Gaza in the past two weeks.

He held up posters with statements from Hamas’s charter—one stating that Israel will exist until Islam obliterates it and another saying that judgement day will not come until Muslims fight and kill the Jews. He contrasted it with the U.N. charter formulated in the wake of World War II and the Holocaust, reaffirming faith in fundamental human rights, tolerance, international peace and security.

“Sadly, in today’s debate, we are not seeing a defense of the goals laid out for the United Nations, but rather an indifference to Hamas’s charter, which, like the Nazis, is committed to the genocide of the Jewish people,” said Erdan.

“We see an attempt to create a false moral equivalence—an immoral equivalence—between Israel, a democracy that seeks peace and abides by international law, and Hamas, a murderous terrorist organization with an ideology similar to ISIS that is carrying out the double war crime of firing at Israeli civilians while hiding its weapons behind Palestinian civilians, using them as human shields.”

Erdan addressed the assembly amid hours of speeches by representatives from a long list of nations, most condemning Israel and calling its actions in Gaza a violation of international law and human rights. Some even called for action against Israel to be taken by the U.N. Security Council and the International Criminal Court. A few nations affirmed Israel’s right to self-defense, though many speakers failed to mention Hamas or the 4,000-plus rockets that were launched towards Israel from Gaza.

Erdan also criticized the U.N.’s urgency to act when Israel is the subject while ignoring other pressing international issues.

“It is really quite remarkable. Usually, as we all here know, the U.N. works slowly. Very, very slowly,” he said. “It took the general assembly a few months to convene a discussion on the fight against COVID-19, from which millions around the world have died. But when it comes to holding a debate to pressure Israel and give a terrorist organization a free pass, you were able to convene after only 11 days. What a disgrace. Is this what the U.N. was established for?”

While many countries spoke out against Israel during the session, Erdan took aim at Turkey specifically, pointing out that it is one of the countries spurring opposition to Israel in the international arena, using anti-Semitic tropes and encouraging anti-Semitic attacks around the world.

“The Turkish leadership is in no position to preach to Israel, by the way, or anyone else, about human rights or the military harming innocent civilians,” said the ambassador. “The State of Israel will never stay silent in the face of such anti-Semitic attacks. Never has there been a clearer example of the fact that anti-Zionism is anti-Semitism.”

To that end, Erdan called on governments worldwide to protect their Jewish communities and take swift action against the perpetrators of anti-Semitic attacks.