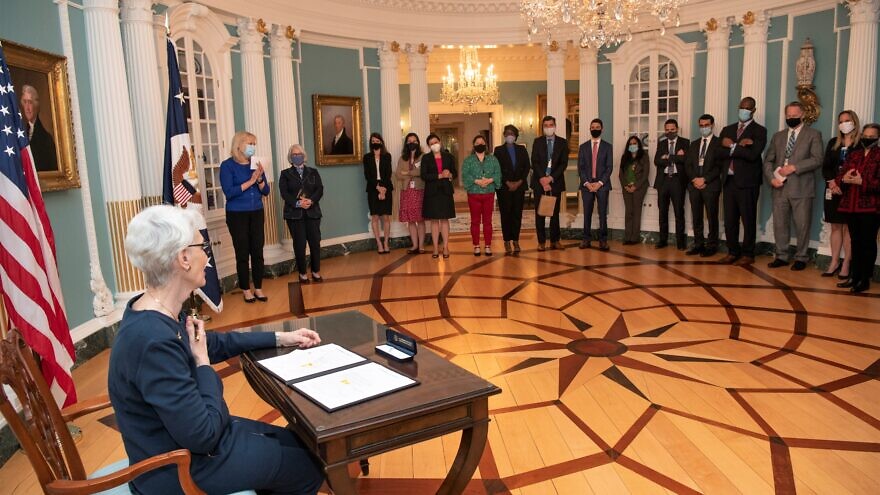 Wendy Sherman signs her appointment papers to become the U.S. Deputy Secretary of State at a ceremony at the U.S. Department of State in Washington, D.C., on April 14, 2021. Credit: State Department Photo by Mark Stewart.
Spread the word.
Help JNS grow!
Share now:

(August 4, 2021 / JNS) Eyal Hulata, the incoming Israeli national security adviser, met with U.S. Deputy Secretary of State Wendy Sherman on Tuesday, during which, according to a U.S. State Department readout of the meeting, the two discussed a number of topics, including U.S.-Israeli bilateral relationship, Iran, the Palestinians, and other security and strategic challenges in the region.

The two also discussed concerns about the recent attack on the Mercer Street oil tanker in the Gulf of Oman.

Sherman emphasized the strong partnership between the two countries, noting that the United States supports the normalization agreements between Israel and four Arab nations.

On Monday, Hulata met with National Security Advisor Jake Sullivan, where similar topics were discussed, as well as positive developments in Israel’s relationship with Israel.

According to the meeting’s readout, Sullivan stressed the “importance of pursuing positive steps related to the Palestinians,” which he believes “are critical to peace, security and prosperity.”

They also discussed the upcoming visit to Washington of Israeli Prime Minister Naftali Bennett, likely in September. His diplomatic adviser, Shimrit Meir, is currently in Washington.