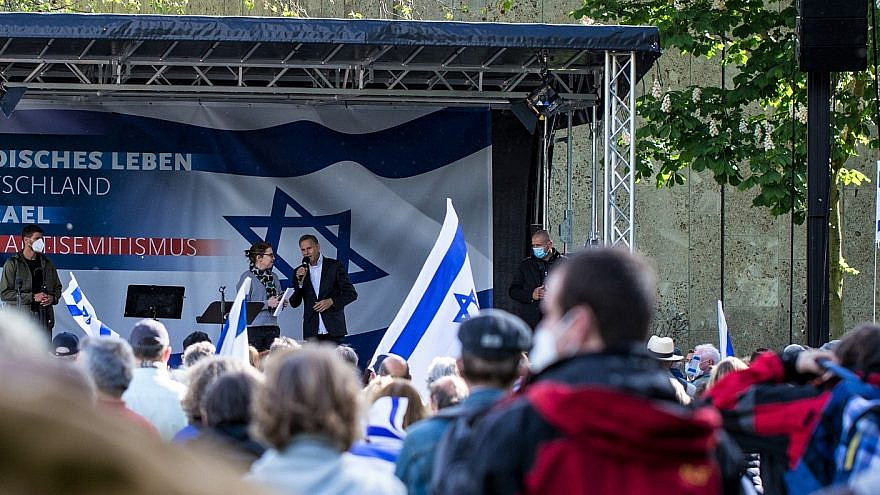 Christians from across Germany gathered with Jewish leaders to voice their support for Israel, May 2021. Photo by Levi Dörflinger/ICEJ.
Spread the word.
Help JNS grow!
Share now:

(May 27, 2021 / JNS) In the wake of the latest Hamas rocket war against the Jewish state, the International Christian Embassy Jerusalem has been working through its national branches and supporters around the globe to organize and join numerous pro-Israel rallies worldwide. The various rallies have expressed solidarity with Israel and its right to self-defense, as well as challenged their governments to stand against the surge of anti-Semitism now sweeping the globe.

In one of the ICEJ’s largest rallies, held in Stuttgart on May 22, more than 1,500 Christians from across Germany gathered with Jewish leaders to voice their support for Israel.

ICEJ-Germany national director Gottfried Bühler called upon the federal government to take firm action against the “aggressive climate change of anti-Semitism” being witnessed in Germany. He also commended recent statements in support of Israel made by the German president and foreign minister, but insisted these declarations must be followed up by concrete steps “to deprive anti-Semitism in our country of its breeding ground.”

Bühler also urged the German government to prevent the flow of taxpayer money into the “treasure boxes” of Hamas and other terror-supporting institutions, as well as to distance Germany from the “club of anti-Semites and anti-Israel revolutionaries” at the United Nations.

Other speakers at the Stuttgart rally included Sandra Simovich, Israel’s Consul General in Munich, and Dr. Michael Blume, Government Commissioner for the State of Baden-Württemberg for the Fight against Antisemitism, as well as numerous Jewish and Christian community leaders.

Israeli Consul Sandra Simovich thanked the Christians for their “true friendship and commitment,” and described the harrowing experience of recent weeks when Jews in Germany were confronted with hateful threats. When pro-Palestinian protesters call for the destruction of Israel, “it is not a show of solidarity but of pure hatred and anti-Semitism,” she said. Simovich added that foreign aid to rebuild Gaza must not end up as an investment in Hamas terrorism.

Other speakers noted that Israel was being forced once again to fight for its survival, while also voicing dismay that in the very year the nation is marking 1,700 years of Jewish life in Germany, Jew-hatred is finding its way back onto German streets.

One poignant moment came as the crowd listened in silence to 90-year-old Holocaust survivor Eva Erben speaking from Ashkelon in southern Israel with sirens were wailing in the background. Erben described the horror of living under constant rocket barrages and her concerns that Hamas was abusing the Palestinian population as human shields.

Other recent pro-Israel rallies with ICEJ sponsorship or involvement have taken place in dozens of other countries, including Denmark, Liberia, Netherlands, Nicaragua, Mexico and Slovakia.

At the ICEJ-Mexico solidarity rally in front of the Israeli Embassy in Mexico City, Israeli Ambassador Zvi Tal expressed appreciation for the show of Christian support.

He also noted the insanity of Hamas “firing rockets towards Jerusalem, which is a holy city also for Islam. So, we face this terrorist organization that has nothing to do with the legitimate rights of the Palestinian people, with whom we would like to live in peace, in coexistence.” 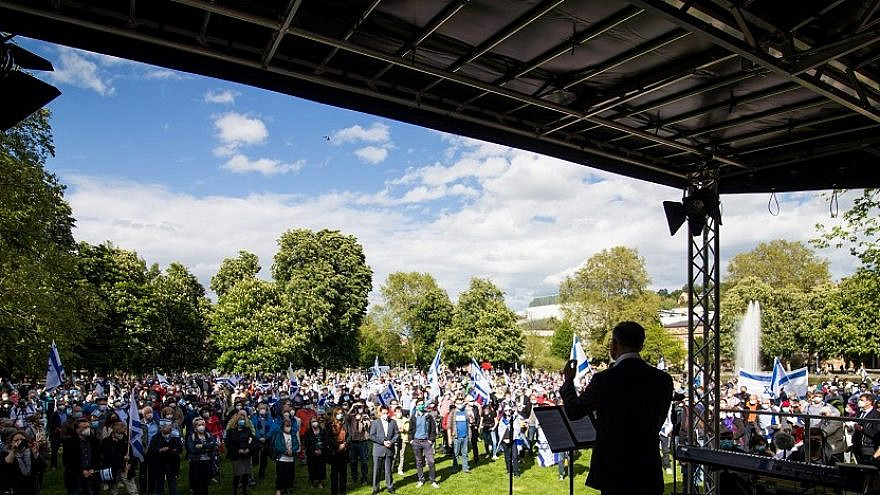 Pro-Israel rallies with ICEJ sponsorship or involvement have taken place in dozens of other countries, including Denmark, Liberia, Netherlands, Nicaragua, Mexico and Slovakia, May 2021. Photo by Levi Dörflinger/ICEJ.
Republish this article in your newspaper or website