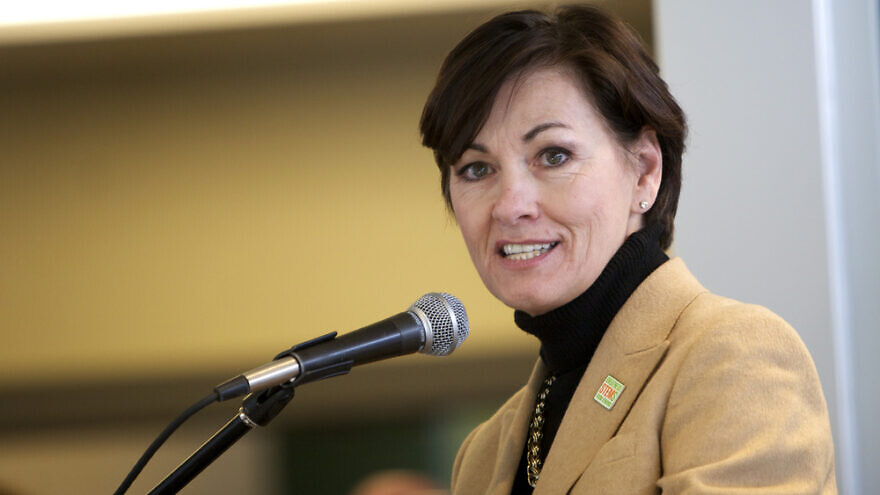 The first bill prohibits state pension funds from investing in any publicly traded parent company, business entity and subsidiary not based in the United States that engages in BDS activity against Israel.  The second bill establishes the International Holocaust Remembrance Alliance (IHRA)’s working definition of anti-Semitism into Iowa law, making it a tool that can be used by law enforcement, courts, public officials and administrators to identify and investigate incidents of anti-Semitism.

Both will go into effect on July 1.

“We express Iowa’s enduring support for the State of Israel and our categorical rejection of anti-Semitism,” said Reynolds. “Together, these bills send an important message: Iowa continues to stand shoulder to shoulder with the State of Israel—one of America’s most important and reliable allies—while fighting all forms of religious and ethnic discrimination.”

Reynolds signed the two bills during a meeting with Consul General of Israel to the Midwest Yinam Cohen, who will address both the House and Senate Chambers at the Iowa State Capitol about increasing cooperation between Iowa and Israel.

“Israel has always claimed that any solution to the Israeli-Palestinian conflict must be reached through direct negotiations between the two sides,” said Cohen. “Any third party’s attempts to predetermine the parameters of the final-status agreement are counterproductive to solving the conflict. Today’s bill signings by the Iowa Legislature reaffirms a message of commitment to Israel based on shared values.”

Cohen added: “We strongly believe that both Iowa and Israel can continue to work together to create lasting partnerships that are beneficial to both states and local economies. Gov. Reynolds has been steadfast in her support for Israel and she has witnessed firsthand Israel’s achievements in innovation, water technology, medicine and agricultural technologies.”