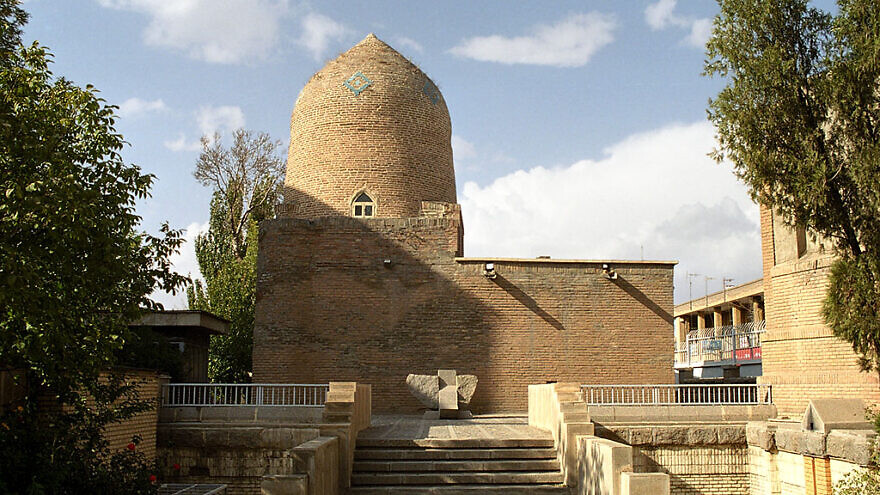 The mausoleum of the biblical Esther and her cousin Mordechai in Hamadan, one of the most important Jewish sites in Iran, May 2002. Credit: Philippe Chavin via Wikimedia Commons.
Spread the word.
Help JNS grow!
Share now:

(March 13, 2022 / Israel Hayom) Ahead of the Purim holiday, Israel’s National Library has revealed an exchange of historical letters proving that Iranian Jews purchased the Tomb of Esther and Mordechai in the Iranian city of Hamadan in 1971. The purchase marked 2,500 years to Persian King Cyrus the Great’s edict allowing Babylonians to worship the god of their choice.

The letters reveal negotiations between Jewish representatives in the country and officials in Shah Mohammad Reza Pahlavi’s government regarding the purchase of the plot in which according to tradition, Mordechai and Esther, whose story is read in the book of Esther on Purim, are buried. The extraordinary exchange was preserved by the ORT organization, maintained in the central archive in the National Library’s Central Zionist Archives.

There is no mention of their burial site in Jewish texts, but according to several local traditions dating back to the Middle Ages, the two are buried in Hamadan. According to one of the traditions, following the death of King Ahasuerus, supporters of Haman, who attempted to have all the Jews in the kingdom killed, sought to exact revenge, prompting Esther and Mordechai to flee to Hamadan.

Initial evidence of the mausoleum’s ties to the Jewish figures was provided by medieval Jewish traveler Benjamin of Tudela in the 12th century, who estimated Hamadan to have around 50,000 Jewish residents and described the tomb as being situated in front of the synagogue.

According to Samuel Thrope, the curator of the National Library’s Middle East and Islam Collection, the letters are a testament to Iran’s last shah having seen himself as Cyrus’s successor and having sought to portray that image to his country’s Jews. The 2,500-year anniversary of the Edict of Cyrus was precisely the event the shah had been looking for, said Thrope.

In a 1968 letter to the Iranian Jewish community’s representative in parliament, Lotfollah Hay, Iranian Archaeology and Public Education Department Director-General Abdolali Pourmand clarified that the country’s Education Ministry would assist the Jewish community in Iran with purchasing the tomb and the surrounding lands from its owner at the time, the Bazargani Bank. The acquisition would be paid for through the sale of tickets to enter the tomb, they explained.

In their exchange, the regime’s sense of urgency is apparent. Pourmand specifically asks the Jewish community for its response to the proposed initiative as the government had yet to receive an answer on the matter.

According to the letters, the lands were purchased on Jan. 18, 1970, after which ownership of the plot was transferred to the local Jewish community.

Thrope explained: “This story sheds a unique light on the Jewish community’s ties to authorities in Iran over the years and Cyrus’s special status, both among Jews and the Persian public.”