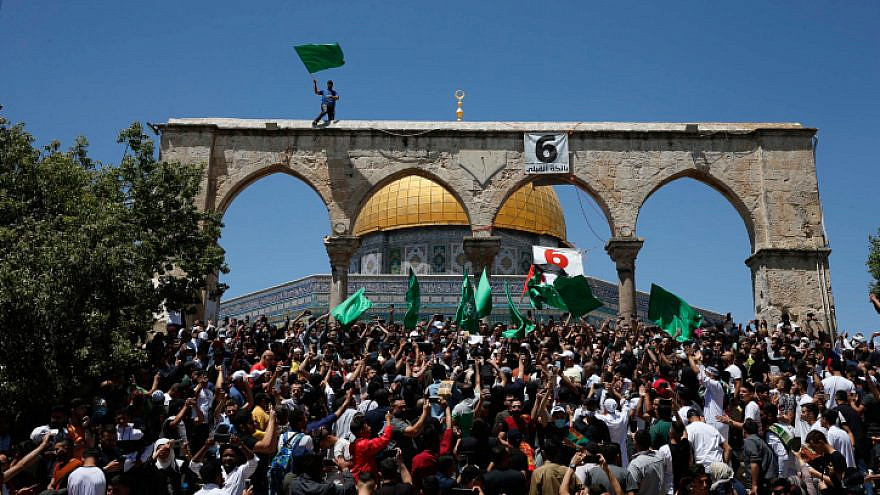 (May 10, 2021 / JNS) Thousands of Arab protesters have been violently rioting on the Temple Mount (known by Muslims as Haram al-Sharif) throughout the “Jerusalem Day” holiday and over the course of the last several days, accusing Israel of attempting to “storm the Al-Aqsa mosque” and “Judaize” the entire city. Hundreds of rioters have been injured, along with dozens of Israeli police and security personnel.

Israeli police decided on Monday morning to bar Jewish visitation to the Temple Mount on Jerusalem Day, which commemorates Israel’s victory in the 1967 Six-Day War, and the subsequent liberation and unification of Jerusalem.

What started several weeks ago at the beginning of the Muslim holy month of Ramadan as sporadic attacks by Muslims against visibly recognizable Orthodox Jews in Jerusalem for the purpose of uploading videos to TikTok has erupted into full-fledged violence in Jerusalem. Now, the region has seen the launching of rockets at southern Israeli communities on Israel’s border with Gaza and even Jerusalem itself, violent Palestinian riots at the border and the launching of balloons attached to incendiary devices, causing dozens of fires in Israeli fields and forests over the past several days.

Alongside accusations of Israel trying to Judaize the city, protesters have also been violently supporting four Arab families who are slated to be evicted from their homes in the neighborhood of Sheikh Jarrah (known by Jews as the ancient Shimon HaTzadik neighborhood), as per a Jerusalem Magistrate Court’s ruling indicating that the homeowners are in actuality Jews whose property was confiscated by Arabs after Israel’s 1948 War of Independence.

The Arab occupants of the homes brought the case to Israel’s Supreme Court, which several days ago decided to postpone issuing a final ruling on the matter until next month in order to avoid increasing tensions.

Dan Diker, project director for the Program to Counter Political Warfare and BDS (Boycott, Divestment and Sanctions) at the Jerusalem Center for Public Affairs, told JNS that the current riots are a direct result of the Palestinian leadership’s declaration that “the Al-Aqsa is in danger,” which has served as a battle cry against the Jews for the past 100 years.

Diker said “100 years ago, the first Palestinian spiritual leader Haj Amin a-Husseini, the head of the Muslim supreme council at the time, incited against the Jews by declaring ‘the Al-Aqsa is in danger.’ So 30 years before the establishment of the state, he made the claim that Jews were trying to destroy the mosque.”

He added that “Al-Husseini cooperated very closely with the Nazi and Italian fascists. There is a direct connection between the Islamic extremist blood-libeling of the Jews using the “Al-Aqsa is in danger” battle cry to his close cooperation with those regimes in the 1930s.

According to Diker, the same method of incitement was used by Palestinian Authority head Mahmoud Abbas in 2015 to launch the “stabbing intifada,” as did his predecessor, Yasser Arafat, who triggered the Second Intifada in September 2000.

With Israel bearing the brunt of criticism from international bodies for this week’s violence, Diker noted, “How the West falls for this every time is curious. This has been an explicit strategy of P.A. leadership since 1993, in order to ignite the Middle East and to mobilize the West against Israel in recent decades.”

He added that “it is incumbent upon Western policymakers to understand this exploitation of sensitive religious sites that only Israel can protect for all religions. Those who ignite the jihad throughout the Middle East and Muslim world make their Western partners unwitting supporters of Palestinian jihad under the banner of protecting Palestinians’ religious and human rights.”

The U.N. Security Council, which has been critical of Israel’s response to the violence, is slated to hold an emergency meeting on the situation in Jerusalem on Monday. 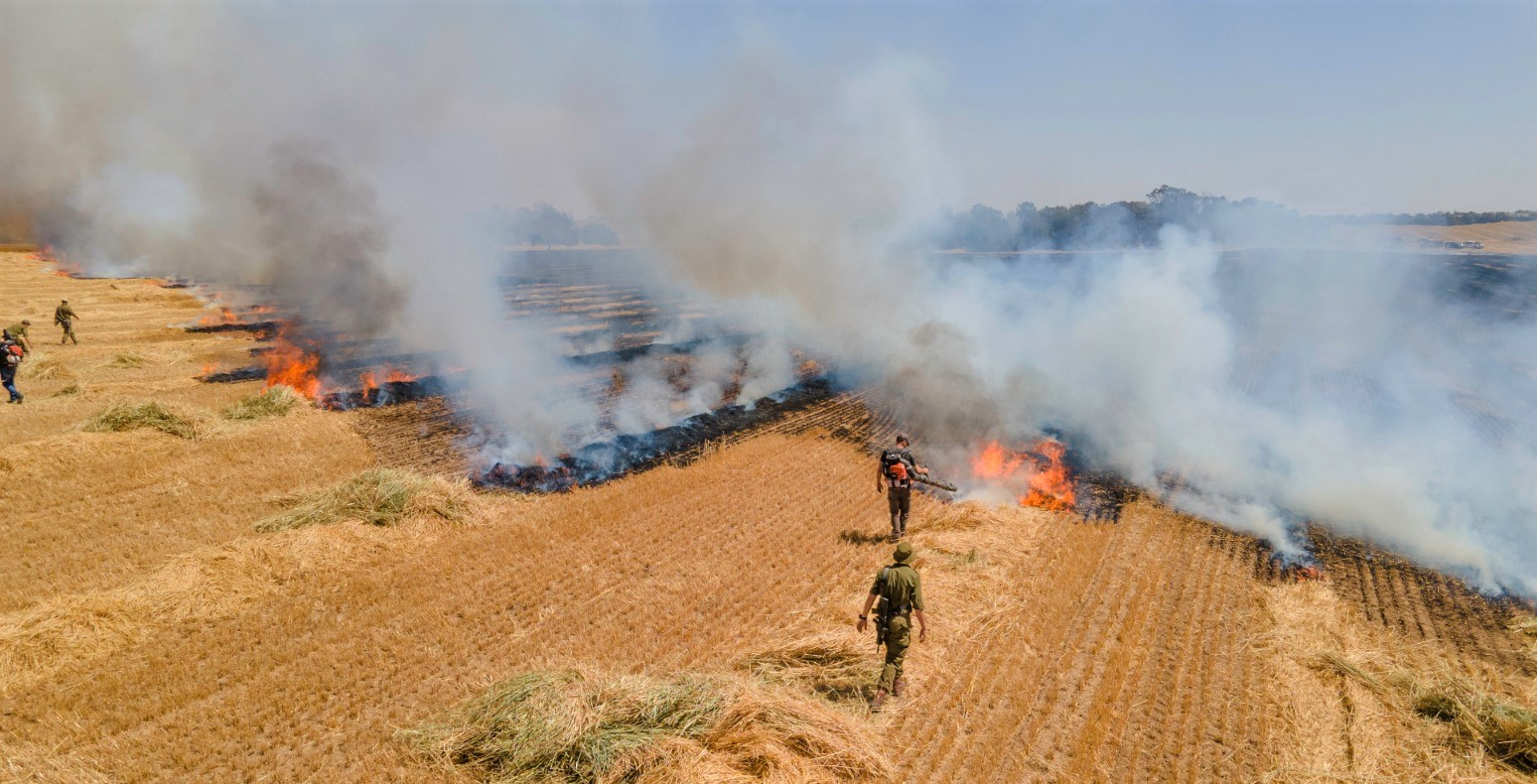 Incendiary devices launched by Hamas in the Gaza Strip have started fires along the border in Israel’s south, May 10, 2021. Credit: Amnon Ziv, Courtesy JNF-USA.

‘This round of violence was premeditated and planned’

Dana Mills, director of development and external relations at Peace Now, told JNS that her organization believes “the violence that has erupted in Jerusalem is impossible to separate from the over-policing of this year’s Ramadan and the threat of evicting hundreds of Palestinians from their homes in the Sheikh Jarrah neighborhood, as well as in Silwan and Batan al-Hawa.”

“Although these cases are being argued before the Israeli courts as isolated and individual disputes over land ownership, the truth is that it is a systematic government-endorsed campaign, driven by political and ideological motives to consolidate Israeli hegemony of these areas by forcibly transferring entire Palestinian communities and supplanting them with Jewish settlers,” she said. “The only effective means of preventing the mass displacement of these Palestinian families is through a government directive that can only be achieved as a result of amplified pressure.”

Maurice Hirsch, director of Legal Strategies for Palestinian Media Watch, disagreed as to the cause of the friction. He told JNS that “the current violence in Jerusalem has nothing to do with Sheikh Jarrah. This round of violence was premeditated and planned by both Mahmoud Abbas’s Fatah and Hamas. Traditionally, Ramadan has always been used as an opportunity to incite and promote violence.”

He added that “this year, on the backdrop of the now-canceled Palestinian elections, both Fatah and Hamas were trying to win the hearts of the Palestinian voters, each one showing their credentials as the self-declared defenders of Jerusalem. Each one had to outdo the other.”

Hirsch said “the convergence of the Night of El-Kader [one of the most sacred nights in the Islamic calendar, which takes place over the last 10 days of Ramadan] with Jerusalem Day meant that from the point of view of the terrorists, the timing was perfect. Sheikh Jarrah is just conveniently being used as a subterfuge to excuse the terrorist violence framing it as a desperate attempt to avoid the eviction of the squatters from the land on which they refuse to pay rent.”