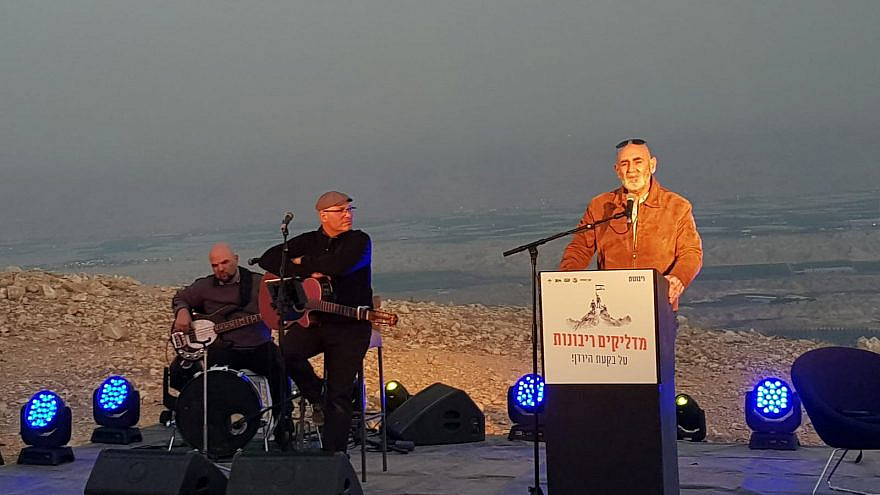 (December 16, 2020 / JNS) Several months ago, Israel agreed to temporarily suspend applying sovereignty over parts of Judea and Samaria, and the Jordan Valley, under the Trump administration’s “Peace to Prosperity” Middle East plan in exchange for normalization deals with the United Arab Emirates and the Kingdom of Bahrain.

Now, a new campaign has been launched by Israel’s Sovereignty Movement to encourage the application of Israeli law over those areas by the government, starting with the Jordan Valley and the northern Dead Sea area, before Donald Trump’s presidency comes to an end.

To kick off the campaign, on the first night of Hanukkah the movement teamed up with the Jordan Valley Regional Council, along with several other organizations, to host a virtual event titled “Lighting Sovereignty over the Jordan Valley.” More than 30 Israeli ministers and Knesset members also participated.

According to Nadia Matar, co-founder of Israel’s Sovereignty Movement, “especially during Hanukkah, in the spirit of the Maccabees, Israel should say that this is our land and apply sovereignty over all of it.”

Matar, who founded the organization along with Yehudit Katzover, told JNS “that while there are those who encourage the shelving of sovereignty as a result of COVID-19 or the upcoming Biden administration, we believe exactly the opposite: Now is the time to raise the flag of sovereignty more than ever.” The lighting of the Hanukkah menorah at the Sovereignty Movement’s event. Credit: Meir Elipur.

Matar stated that the “overwhelming majority of the Israeli public believes that sovereignty should be applied over the Jordan Valley, and now that the left is once again raising the issue of the ‘two-state solution,’ the focus should be on the application of sovereignty.”

According to poll statistics released at the event, more than 56 percent of the general Israeli public favors applying Israeli sovereignty over the Jordan Valley and Northern Dead Sea region, while 80 percent of Israelis who consider themselves “right-wing” voters believe that Israel should make the move.

Additionally, as much as 48 percent of Israelis believe those moves should be taken right away since the window on the Trump administration closes next month—specifically, on Jan. 20 when Joe Biden is to be inaugurated as the next president.

‘The only way to ensure security’

Addressing the event, coalition chair Miki Zohar of the Likud Party said, “I think that Israel should work towards applying sovereignty over the Jordan Valley and also take the opportunity to advance the application of sovereignty over many communities in Judea and Samaria, if not all of them. It’s an opportunity that might not present itself again.”

Zohar said he is currently working with Israeli Prime Minister Benjamin Netanyahu on this issue during the final days of the Trump administration.

He added that he doesn’t believe that Israel needs to coordinate such moves with the Palestinian Authority. Zohar also expressed his opposition to a Palestinian state, saying such an entity will only lead to further terrorism in the region, while at the same time urged Palestinians to distance themselves from terror in order to peacefully co-exist with Israelis.

Maj. Gen. (res.) Gershon Hacohen, a senior research fellow at the Begin-Sadat Center for Strategic Studies, expressed his support for sovereignty, stressing the security importance for Israel having a permanent civilian and military presence in Judea, Samaria and the Jordan Valley.

Hacohen said it is impossible to protect Israel’s tiny, crowded coastal plain, where the majority of Israelis live from Hadera in the north to Gadera in the south, which at points is only between 15 and 20 kilometers (nine to 12 miles) wide, without having an Israeli presence in the mountains up above.

He added that “the Jordan Valley is Israel’s natural buffer protecting [Israel] from everything to the east: Jordan, Iraq, Iran. And if we weren’t sitting in the Jordan Valley or in Judea and Samaria, Iranian proxies would be on the high grounds in mortar range of Tel Aviv. The only way to ensure the existence of Tel Aviv’s security is to be there.”

Hacohen said that when Israel pulled out of Gaza in 2005, the area became a strategic Hamas threat against Israel, and “it would be much, much worse if we left this area.”

He called on 2 to 3 million Israelis to consider leaving the congested coastal plane to settle in Judea, Samaria and the Jordan Valley, saying that a civilian presence with Israeli military protection there is key to protecting the rest of the country.

Kenneth Abramowitz, the founder of SaveTheWest.com, another sponsor, echoed comments by Hacohen, saying “it’s very important for Israel and the Israel Defense Forces to maintain control because if the IDF is not there, and the citizens aren’t there, the bad guys will be.”

The event, which concluded with a musical Hanukkah candle-lighting ceremony, was also sponsored by the Zionist Organization of America; Regavim; the Israel Forever Foundation; and Americans for a Safe Israel.