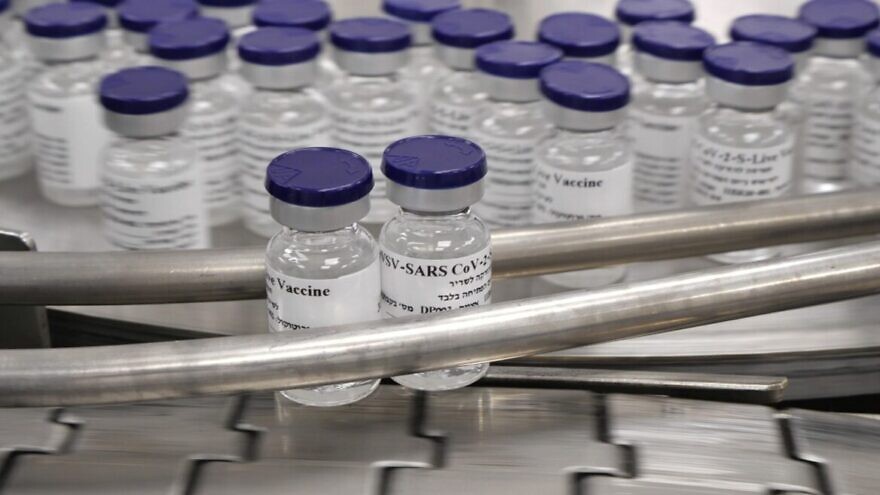 The American company signed an agreement with the Defense Ministry in July to help fast-track the vaccine, developed by the Israel Institute for Biological Research. NRx, which is traded on Nasdaq, was given exclusive worldwide development, manufacturing and marketing rights.

NRx met with IIBR experts last week to review data and research related to BriLife’s efficacy against the Omicron variant of the SARS-CoV-2 virus, professor Jonathan Javitt, chairman and CEO of NRx Pharmaceuticals, told JNS. Based on those preliminary findings, which Javitt described as “promising,” the company is working with local health experts to design a Phase II study of BriLife as a booster to protect against COVID-19 variants of concern, including Omicron.

The study will be led by Professor Yossi Caraco, director of the clinical research unit at Hadassah-University Medical Center, who helped lead the Phase I and II studies of the vaccine in Israel, and Jacob Atsmon, the managing director of early-phase clinical trials at the Clinical Research Center of Tel Aviv Sourasky Medical Center. It is meant to kick off this quarter.

Study volunteers will be fully vaccinated with mRNA vaccines, meaning they will have taken a minimum of two doses of the Pfizer or Moderna vaccines within the last six months.

“We have seen the deadly impact caused by COVID-19 and its increasing number of variants, and we are eager to determine the immunity-building impact the BriLife vaccine may offer on top of that already conferred by baseline mRNA vaccination,” said Javitt.

Israel launched a fourth-shot campaign earlier this month as Omicron started spreading across the country. The campaign is targeted at immunosuppressed individuals, medical workers and those over the age of 60. So far, more than 400,000 Israelis have gotten a fourth, “booster” dose of Pfizer’s vaccine.

At the same time, Sheba Medical Center at Tel Hashomer launched a clinical trial of the fourth dose. Earlier this month, the hospital reported that a fourth shot of the Pfizer vaccine, administered to individuals who received their third shot nearly five months ago, produces a five-fold increase in antibodies. However, the trial’s lead researcher, Dr. Gili Regev-Yochay, told Army Radio that “the amount of antibodies returns to the level it was after the third vaccine, not more. It’s nice, but it’s not what we expect from a booster.”

Multiple studies conducted in and outside of Israel have found that the effectiveness of the mRNA vaccines wanes after three to six months.  The vaccine was also found to be less effective both against the Delta and the Omicron variants.

The BriLife vaccine is a vector-based vaccine. It takes the vesicular stomatitis virus and genetically engineers it so that it will express the spike protein of the novel coronavirus on its envelope. The body recognizes the spike protein that is expressed on the envelope and begins to develop an immunological response.

“The BriLife vaccine differs from other COVID-19 vaccines by presenting the entire COVID-19 spike protein to the body’s immune system,” NRx explained in a release over the summer. “It also differs from other COVID-19 vaccine approaches in that it is a self-propagating, live-virus vaccine in which the spike protein of the vaccine appears to evolve in a manner consistent with the evolution of the SARS-CoV-2 virus in nature.

“Thus, while variants may arise that support manual enrichment of the vaccine against those specific variants, the vaccine itself may continue to evolve in a manner that provides ongoing protection against variants,” the release said.

NRx also announced that the Israeli Health Ministry has approved a study investigating delivering BriLife via intradermal injection with a microneedle system patented in Israel: the NanoPass MicronJet.

Javitt said that around 100 people would be participating in that trial, which is meant to kick off soon.

NRx announced in the fall that it had delivered BriLife doses to the country of Georgia for a Phase II/III registration study to compare the Brilife vaccine to an already licensed vaccine. However, Javitt said that the study was delayed due to Omicron.

IIBR’s laboratory data on the vaccine’s effectiveness against the new strain has been sent to Georgia, and Javitt said the expectation is that the trial will soon commence as well. The company is also talking with Hungary.