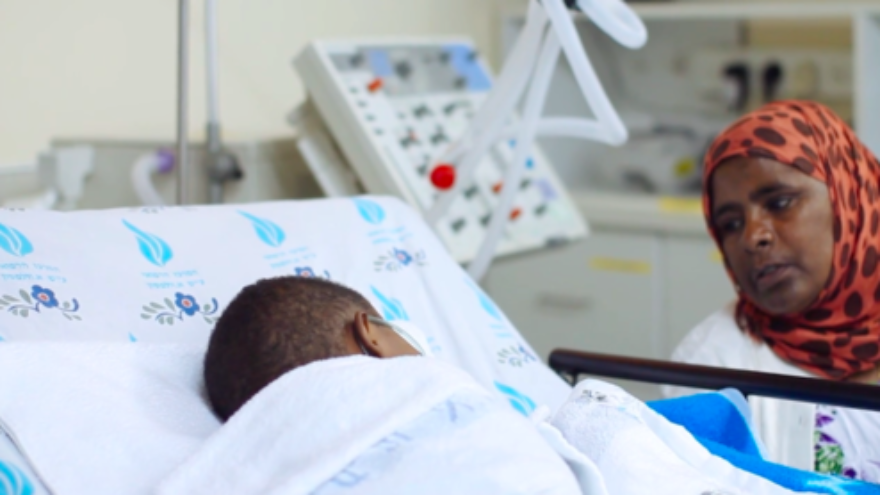 Click photo to download. Caption: A scene from "The Heart of Israel," a video produced by the Israel Collective featuring the work of Save a Child's Heart. Credit: Israel Collective via vimeo.com.
Republish this article
860 WORDS
Spread the word.
Help JNS grow!
Share now:

The American Public Health Association (APHA) this week praised a video produced by the Israel Collective, a project of Christians United for Israel, showcasing an Israeli charitable organization and medical center dedicated to saving the lives of children regardless of race, religion, or culture.

Presented in Chicago on Nov. 3 at the 143rd APHA Annual Meeting & Exposition, the video— titled “The Heart of Israel” and shown during the APHA Global Film Festival—was recognized as an “Official Selection” by the public health advocacy group.

The video features the work of Save a Child’s Heart (SACH), a non-profit that provides life-saving heart procedures for children from developing countries. The group’s executive director, Simon Fisher, notes, “To date, the organization has saved the lives of more than 3,500 children from 48 countries here in Israel at the Wolfson Medical Center.”

“We are very proud that this represents the best of Israel, based on the core Jewish values that each and every one of us has been brought up on, and that value is life,” he says.

Directed and edited by Dan Ostrem and co-produced by Raj Nair and Josh Ahrens, who serve as the leadership of the Israel Collective, the roughly six-minute documentary interviews doctors, mothers, and caretakers whose lives have been saved by this unique partnership.

“Israel is this tiny democracy in the Middle East, the only functioning democracy that is surrounded by neighboring countries that are hostile or unstable. While it is important for the media to tell that story, we feel it’s equally important to the tell the story of Israel’s heart and Israel’s people and even with this extreme difficulty they continue to reach out with a hand of peace and of generosity,” Ahrens tells the Salomon Center for American Jewish Thought. “There are so many stories like this coming out of Israel and it’s our goal to find them and document them in a beautiful way that honors the people and brings these stories to a world that needs to hear them.”

“Both were very eager to talk about their experience because it was so filled with love, compassion, friendship, this hand of kindness and courage,” explains Nair. “I can’t speak for them, not sure what they thought might happen, but having experienced that kind of love, they were bursting at the seams to tell their story.”

Nada was 1 month old when she was admitted to the medical center for a life-threatening ailment. Her parents who live in the West Bank had the heartbreaking experience of leaving their newborn child in the hospital. Her mother explains in the video, “They saved her and now she is good and she goes to kindergarten and will grow up.”

Fatima is a Muslim woman who works at the center and runs a support group that meets once a week.

“I invite Palestinians, Israelis or anyone. Sometimes Africans, Syrians and Kurdish,” says Fatima. “We just talk and share thoughts, share experiences. We can learn from each other because at the end of the day they have the same problem, children with heart problems or any other problem.”

While the video offers much hope and serves as an example of how people can transcend their differences for the sake of their children, the worst of hatred still rears it ugly head. Tunisian-born Dr. Sion Houri, Director of the Pediatric Intensive Care Unit at Wolfson Medical Center, explains that they have never operated on an Egyptian girl due to the hate and anti-Israel propaganda that engulfs Cairo.

“The closest we ever got was an Egyptian father trying to find a solution for his kid via the Internet,” Houri says. “Being in contact with our people in England, when he understood that the surgery was to happen here in Israel, the last we heard from him was, ‘I’d rather see my kid dead than treated by a Jew.’ ”

This sentiment is not limited to this one incident.

“Unfortunately, this is far more common than any parent might think. On a number of occasions, SACH has learned that parents from Arab countries refused to send their children to Israel to receive life-saving medical care simply because the care was to be provided in the Jewish state. That said, SACH has saved around 2,000 Arab children, and couldn’t care less who a child’s parents are, where they are from, or what their background is,” says Ari Morgenstern, communications director for Christians United for Israel and member of the SACH Advisory Board.

Fatima does not share the hate-based view described above, explaining in the film, “It’s not always what we see on TV. There are relationships on both sides and families will become friends with other families, Israelis and Palestinians. They need each other and know each other here closely; they find that we are all the same.  At the end we are all the same, we are human.”

The Israel Collective plans to continue making documentaries geared toward telling the truth about the Jewish state. They have three currently in production.