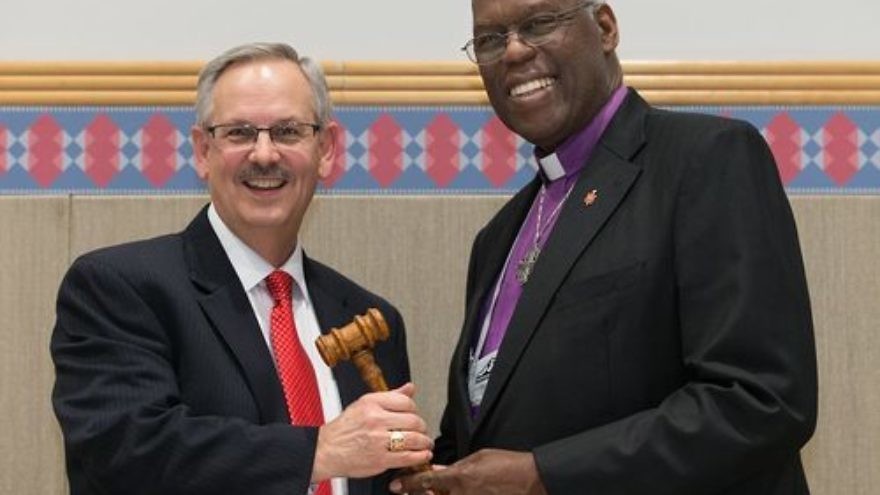 (May 26, 2016 / JNS) As support for Israel erodes in many Western countries, especially among liberals and the millennial generation, American-Christian backing for the Jewish state is considered one of the bulwarks against such trends. But not all Christians feel warmly about Israel. During the past several years, a number of leading mainline Protestant churches—including the United Church of Christ, Presbyterian Church USA, the Episcopal Church, and most recently the United Methodist Church (UMC)—have considered or voted on resolutions supporting the anti-Israel Boycott, Divestment and Sanctions (BDS) movement.

In May, at the Church’s quadrennial general conference in Portland, Ore., UMC committees rejected four resolutions that called for divestment from companies doing business in Israel, such as Caterpillar, Motorola Solutions, and Hewlett Packard.

“What happened at the UMC’s general conference is a miracle,” Dexter Van Zile, a Christian media analyst for the Committee for Accuracy in Middle East Reporting in America (CAMERA), told JNS.org.

Van Zile praised the Methodist delegates for going a step further in their decision by voting to encourage UMC institutions “to disaffiliate with the U.S. Committee to End the Occupation, a far-left anti-Israel agitprop organization that includes ISM (International Solidarity Movement) groups that condone violence against Israel and others that agitate for Israel’s destruction.”

“These decisions place the UMC on a separate planet when it comes to dealing with the Israeli-Palestinian conflict,” Van Zile said. “On this planet, the adults are firmly in charge. These days, that’s pretty rare.”

Ethan Felson—executive director of the Israel Action Network (IAN), a strategic initiative of the Jewish Federations of North America and the Jewish Council for Public Affairs—said the UMC’s vote highlights the benefits of liberals and conservatives working together.

“IAN applauds the strong stance of the United Methodist Church general convention in rejecting divestment by a sweeping margin both at the committee and plenary level. Liberals and conservatives came together to reject divestment and investment screens at the general convention,” Felson told JNS.org.

While the Methodist Church’s rejection of BDS—and a similar rejection by the Episcopal Church at its general convention in 2015—mark positive developments for pro-Israel advocates, there remains a broader challenge to win over more support from other mainline Protestant churches. Presbyterian Church USA (PCUSA) and the United Church of Christ (UCC) voted to divest from companies doing business in Israel in 2014 and 2015, respectively.

Michael Gizzi, a professor of criminal justice at Illinois State University who serves as a ruling elder in PCUSA, told JNS.org that most Presbyterians were not well-informed about the Church’s 2014 divestment vote.

“I think the average Presbyterian in the pews has little understanding of the vote to divest from Caterpillar, HP, or Motorola. In general, Presbyterians are driven by concern for social justice, and the plight of Palestinians certainly appeals to them,” Gizzi said.

“Yet I’d argue that the majority of Presbyterians are really uncertain as to what the Church has done,” he said. The Church’s actions haven’t had any impact, which is for sure, except to shut it out of the ability to influence.”

In June, PCUSA is holding another national gathering in Portland, Ore., where the Church will again vote on issues related to the Israeli-Palestinian conflict. Among the resolutions the Church is considering is a report on the viability of the two-state solution that was prepared by a group called the Advisory Committee on Social Witness Policy (ACSWP).

“This report suggests that the two-state solution may no longer be a viable way to bring an end to Israel-Palestinian conflict, and that this reality is mostly Israel’s fault. The text, which is 56 pages in length, goes into great detail as to what Israel has allegedly done wrong without assessing in detail the misdeeds of Palestinian leaders,” CAMERA’s Van Zile said.

Gizzi believes the Presbyterian Church’s moves largely stem from its adherents’ lack of understanding about the Israeli-Palestinian conflict, rather than from anti-Semitic views.

“I firmly believe that there are a core group of supporters for BDS who have ideological blinders on. They see one issue, and one issue only—justice for Palestinians. Some of those folks are very much anti-Zionists, and some of them have said and done things which are anti-Semitic,” Gizzi said.

“But the vast majority of people who follow them really do so for less nefarious reasons,” he said. “I truly believe many of the people who say, ‘Yes, let’s take a stance, and do something to try to help Palestinians,’ are genuine, yet have very little understanding of the real underlying motivations of BDS.”

Gizzi is a member of Presbyterians for Middle East Peace (PFMEP), a group that tries to provide an alternative to ACSWP and has argued that the best strategy on the Israeli-Palestinian track is to promote a two-state solution. PFMEP has offered its own report that calls for encouraging Israeli-Palestinian coexistence, investing in the Palestinian economy and a framework for a free market in the West Bank, and promoting Palestinian political leadership that is committed to change.

“In many ways, the resolution the Methodists passed [in May] followed the same model. While they called for a two-state solution in two years—which I found a bit overly hopeful—they called for meaningful investment in Palestine, and for coexistence efforts,” Gizzi said.

In August, the Lutheran Church is also scheduled to hold a national conference in Portland, but Van Zile does not expect there to be an Israel divestment vote at that gathering.

“I don’t expect that divestment will be a force at the denomination’s general synod in Portland, in part because the denomination’s bishops don’t have the appetite for anti-Zionism that the folks in the UCC and the PCUSA do,” Van Zile said.

Throughout most of American history, mainline Protestant churches played a significant role in the foundation and direction of the country. Most of the Founding Fathers were members of the mainline tradition, as were most U.S. presidents and other leaders. Additionally, Christian Zionism and Judeo-Christian heritage were a common theme throughout the early Protestant tradition.

But the ongoing debate over the Israeli-Palestinian conflict within mainline Protestant churches comes amid upheaval within these churches, who are grappling with rapidly declining membership as Americans become more secular.

Given these factors, mainline Protestant churches have become a prominent target for pro-BDS groups.

“There is plenty of evidence that the BDS movement itself is targeting mainline protestant churches,” Gizzi said. “These are democratic churches, with bottom-up leadership structures, and a strong sense of social justice. They aren’t the Evangelical churches filled with Christian Zionists, for the most part. They become a natural target for BDS and the movement has had some success.”

BDS has also gained traction by making church activists and leaders—particularly within the UCC and PCUSA—to feel influential and important, Van Zile argued.

“These two churches in particular are dying, just dying. Losing members and churches, every year. Wading into the BDS movement guarantees they will get at least some—even negative—coverage in the media,” he said.

IAN’s Felson said his group is tracking the potential divestment votes at every mainline Protestant church, but that there are limits to how much IAN can influence the churches’ actual decisions.

“There are multiple factors guiding our analysis and actions,” said Felson. “Each [church] has a unique polity and personality. Each has a diverse complement of members and leaders. BDS groups have different levels of influence. The Jewish community at the grassroots level has close relationships with members of some denominations and scarce ties with others.”

“The Jewish state,” he said, “has become the scapegoat for all of the ills in the Middle East in the minds of the people who call the shots in these churches.”