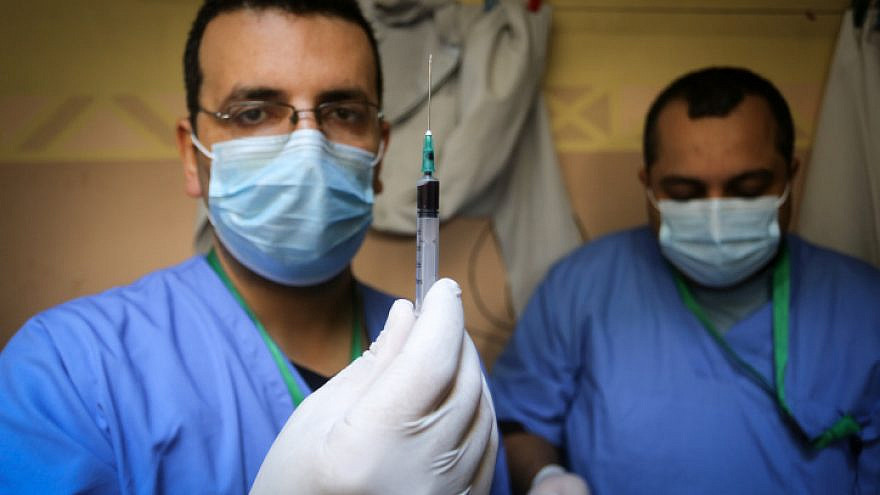 (February 2, 2021 / JNS) Israel on Monday transferred 2,000 doses of the COVID-19 vaccine to the Palestinian Authority, according to Israel’s Coordinator of Government Activities in the Territories (COGAT).

The Moderna vaccines are to be used by medical personnel caring for coronavirus patients, said the P.A. Ministry of Health, wrote Reuters. Any surplus will be administered to those over the age of 60 or who have chronic diseases, said the ministry.

Another 3,000 doses have also been earmarked for the Palestinians, said a COGAT official, according to Reuters.

The P.A. has secured thousands of doses of Russia’s Sputnik V vaccine, but the shipment has been delayed for reasons that have not been made public. Other attempts by the P.A. to procure vaccines, including those made by British-Swedish pharmaceutical firm AstraZeneca have proven fruitless.

Israel has been subjected to international scrutiny, and even outright hostility, in recent weeks regarding its failure to supply the Palestinians with vaccines, despite the fact that according to the Oslo Accords, Israel has no obligation to do so; the P.A. assumed full powers and responsibilities in the field of health care for those under its authority.

Meanwhile, Israel’s vaccination campaign continues with 3,165,545 Israelis having received the first dose of Pfizer’s BioNTech vaccine, representing 34 percent of the population, and 1,84,750, or 20 percent, having received both doses.

Data released last week by Israel’s Maccabi HMO from the first real-world study on the vaccine showed its efficacy was 92 percent, slightly lower than Pfizer’s own clinical study, which indicated 95 percent efficacy but falling within the study’s margin of error.