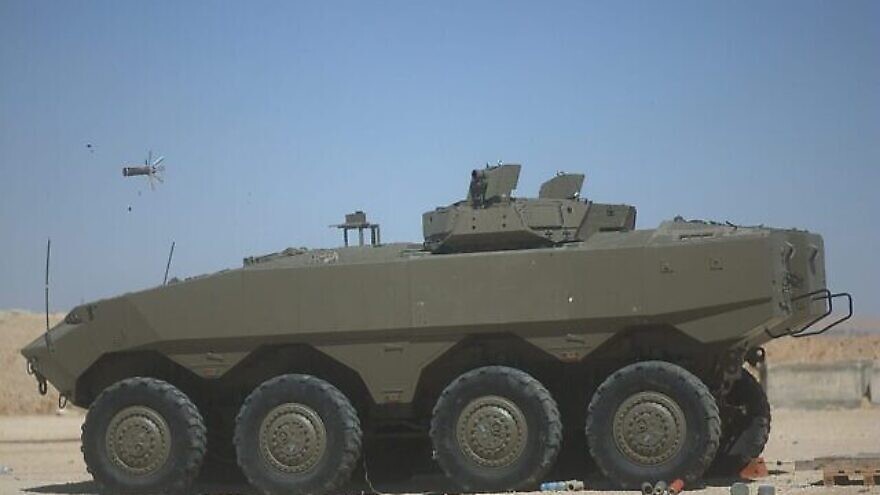 (December 12, 2022 / JNS) The Iron Fist active protection system, made by Haifa-based defense company Elbit Systems, has successfully completed a series of interception tests as part of its development process and installation on board Israel Defense Forces armored personnel carriers and D9 armored bulldozers.

Iron Fist provides 360-degree protection against a range of threats in open and urban environments, according to the statement. It also provides personnel on board APCs with the location of the source of fire against them.

A radar and specialized camera sensor detect threats, and the system fires interceptors at them.

Brig. Gen. Oren Giber, head of the Defense Tank and APC Directorate in the Defense Ministry, said the “directorate is currently completing its preparation for the delivery of the self-developed Eitan advanced 8×8 wheeled APC to the IDF. The Iron Fist system is an important part of this project. It is currently in advanced stages of development and deployment to the Eitan APC and the bulldozer, undergoing rigorous trials to ensure its suitability for the battlefield. The Iron Fist will substantially improve the protection of the Eitan APC and enhance the vehicle’s maneuverability in combat while protecting combat soldiers.”

The Trophy active protection system, made by the Haifa-based Rafael Advanced Defense Systems, is installed on the IDF’s Mark IV and Mark III Merkava tanks.