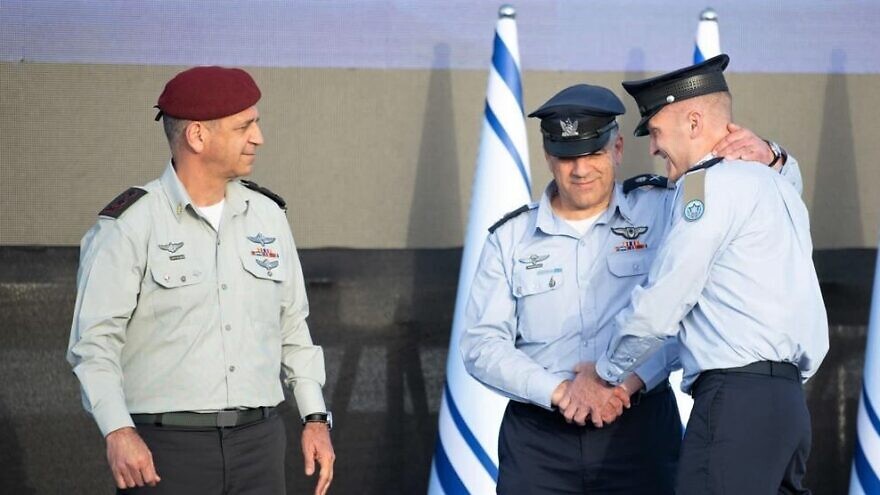 Norkin completed a five-year term, the IDF said in a statement.

A ceremony to mark the occasion, held at Tel Nof Airbase south of Tel Aviv, included IDF Chief of Staff Lt. Gen. Aviv Kochavi, as well as commanders from the German, Greek and Cypriot air forces, and those from the U.S. Air Force in Europe.

“The response to the recent series of attacks is a testament to the professionalism, courage and determination with which IDF units work to defeat terrorism. At least 10 attacks have been prevented in the last two weeks, thanks to intelligence and various operations,” Kochavi said during his address.

“We are increasing and refining the scope of all kinds of aerial systems, detection sensors and armaments in an unprecedented manner,” he added. “All of these are expected to succeed on the day the order is given for precise fire with a high strike rate. These are key parts that will accompany ground maneuvers, demonstrating the full partnership of the Israeli Air Force in ground maneuvering missions.”

Kochavi explained that the sequence of strikes by the IAF “had a decisive impact on preventing the entrenchment of Iranian forces in Syria, on preventing the establishment of Hezbollah forces in the southern Golan Heights, on preventing enemy intensification with advanced weapons systems, and on the direct and immediate thwarting of threats to infiltrate Israel.”

He turned to Norkin and noted that “all of these took place under your watch and under your command. The Air Force became stronger, more sophisticated, thwarted many threats and hit our enemy time and time again. If a country wants a vibrant life, then we—the quality of the people who serve in the IDF, both regular and permanent servicemembers—must be the foundation, which must be preserved and nurtured.”

During his address, Norkin said: “In the summer of 2017, I could not have imagined that this would be such a turbulent period—one of change, large-scale operational activity and a global epidemic that created a routine of life we did not know existed. In recent years, the Israeli Air Force’s role in maintaining national security grew. In recent years, the air force has acted in all sectors and arenas, taking part in both defensive and offensive activities from both the ground and air.”

Bar said “with a sense of responsibility, gratitude and great anticipation for the future, I take command of the Israeli Air and Space Force.”

“We are in a period of regional change,” he pointed out, “which brings risk and opportunities that require a high level of conduct that bears responsibility for Israel’s security. The Israeli Air Force will remain competent and available for any scenario and challenge, in arenas both near and far, facing terrorist organizations, militaries and emerging actors.”