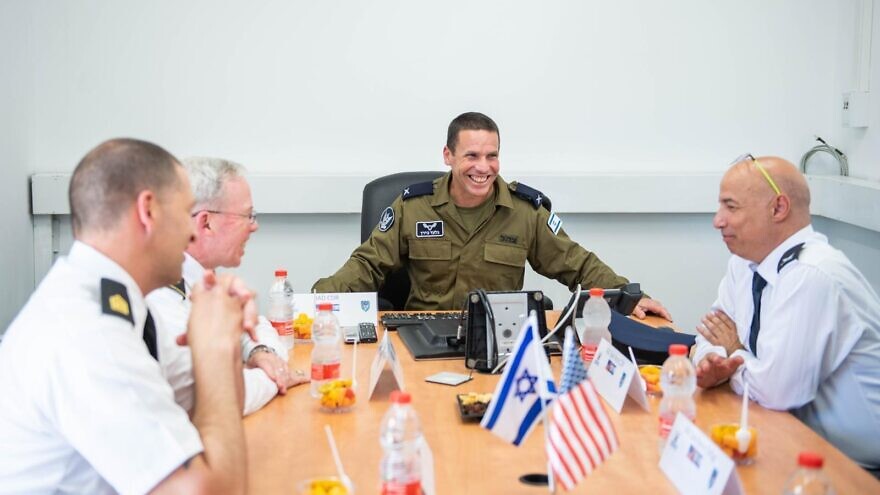 (August 11, 2021 / JNS) Representatives from the U.S. and Israeli Air Forces met last month to discuss a remarkable development: what the Israel Defense Forces described as “updated orders for the cooperation between the two nations’ air-defense systems during emergency situations.”

“The purpose of the meeting was to improve the collaborative readiness of the forces for the joint defense of the State of Israel,” said the IDF. “At the end of the meeting, a document for updated air-defense operational cooperation between the two countries was signed.”

According to Charles B. Perkins, director for U.S.-Israel Security Policy at the Jewish Institute for National Security of America (JINSA), while the two militaries have a long record of cooperation and coordination in joint exercises and air-missile defense planning, “this new agreement and the decision to publicly disclose it take place within the context of some significant recent trends.”

Perkins pointed out that the May conflict between Israel and Hamas, dubbed by the IDF as “Operation Guardian of the Walls,” and the performance of the Iron Dome air-defense system against Gazan rocket salvoes “has certainly garnered some attention within the U.S. Army’s air-defense community.”

Iron Dome maintained an interception rate of approximately 90 percent during the conflict, according to an IDF assessment.

In addition, Perkins said, the issue of counter-drone technology is becoming ever-more relevant.

Hamas launched six drones during the May conflict, and the IDF intercepted them all of them, including for the first time through the use of Iron Dome, as well as missiles fired from F-16 jets.

“The American Army is the lead U.S. service tasked with countering the mounting small drone threat and the prospect of offensive drone swarms—a phenomenon on the horizon in the Mideast,” said Perkins.

Meanwhile, the drizzle of rocket fire targeting U.S. assets in Iraq has “highlighted the need for greater responses to the challenge of nonstate entities using high-trajectory weapons,” he added.

The United States sent two C-130J Super Hercules Aircraft from Ramstein Air Base in Germany to Israel with personnel to take part in the exercise, which was held at multiple locations in Israel.

The long-planned drill “is designed to test simulated emergency response procedures, ballistic-missile defense, and crisis response assistance in the defense of Israel,” the IDF stated.

It also serves as an opportunity for U.S. military personnel and the IDF to exercise together and learn from one another.

While Perkins said it wasn’t possible to say with certainty which air-defense systems America might offer, should Israel request emergency support, he noted that “the configurations seen during the recent Juniper Cobra drills are probably a good indication.”

In line with what the exercise showed, Patriots, naval-based interceptors such as the Aegis destroyer SM-3 and perhaps the THAAD, which was deployed for the first time to Israel during one of the most recent joint exercises, could be sent over, assessed Perkins.

Such systems could integrate with Iron Dome, David’s Sling, and the Arrow 2 and 3 air-defense systems, the latter which intercepts ballistic missiles in space.

“Clearly, this new agreement is a reflection that America recognizes the mounting danger Israel faces, particularly from the north and east, and seeks to ensure that if a future conflict escalates to a certain level, the United States will be prepared to rapidly take the necessary steps to support Israel’s air- and missile-defense requirements should a political decision be made to do so,” stressed Perkins.

Meanwhile, the fact that Israel has transited to America’s CENTCOM area of responsibility, which commands forces in the Middle East, and away from EUCOM, has not stopped significant links between the IDF and EUCOM on air-defense cooperation, he said.

On the other hand, Perkins cautioned that the fact that CENTCOM has been ordered to withdraw American missile-defense assets from the Gulf region as the threat from Iran and its proxies mounts “is not an encouraging development for regional security.”

Meanwhile, the U.S. Army has purchased two Iron Dome batteries made by Israel’s Rafael Defense company as part of an initial evaluation phase. Rafael has demonstrated the system for the U.S. Marines as well.

Raytheon said the site will help the U.S. Department of Defense and allies across the globe obtain the system for the defense of their service members and critical infrastructure.

“While there’s still a degree of uncertainty regarding what the U.S. Army intends to do with the two Iron Dome batteries it’s acquired—now undergoing testing—it stands to reason that boosting the mechanisms for bilateral air-defense cooperation will support any synergies that may arise, as Israel continues modernizing and expanding its own Iron Dome capabilities,” said Perkins.