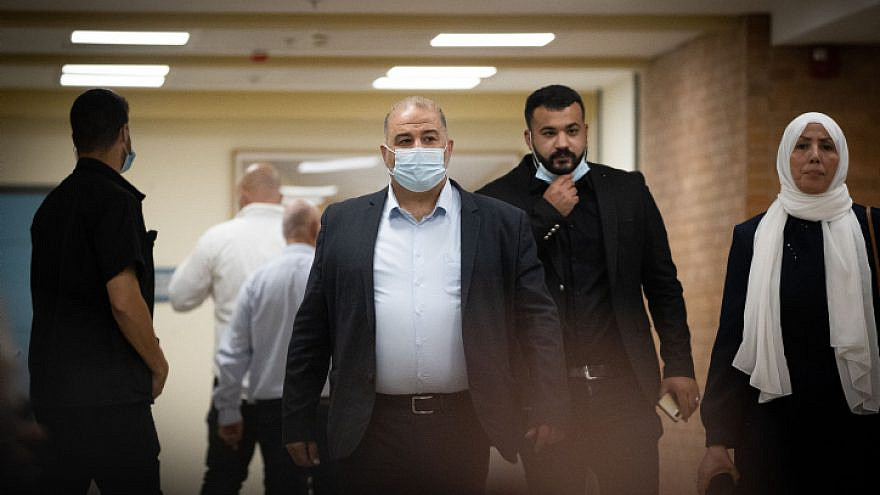 (May 14, 2021 / JNS) The head of the Islamic Movement political party Ra’am, Mansour Abbas, said on Thursday that he was freezing talks to form a government because of the violence between Arabs and Jews, making it increasingly likely that new elections will need to be held.

“We have stopped all political contacts,” he said in an interview on Army Radio.

Yesh Atid leader Yair Lapid and Yamina head Naftali Bennett have been in talks with the Joint Arab List, Abbas’s Ra’am and left-wing parties to form a government, but the recent conflict has thrown those talks into a tailspin.

Since the riots broke out, Bennett’s party has been under heavy pressure by his base and right-wing voters not to form a left-wing government with the Arab parties. It seems increasingly untenable that other parties, like Gideon Sa’ar’s New Hope, will be able to join such a government with a war going on and Arab riots breaking out across the country.

On Thursday evening, Bennett read the political currents and reversed course, with Israeli media reports saying that he has ruled out forming a government with Lapid, as well as with left-wing and Arab parties.

The Israel Police instituted a blanket curfew on the central Israeli town of Lod on Wednesday night after Arab rioters destroyed cars, businesses and synagogues the day before. Arabs continued mob violence into the evening in other cities with large mixed Arab and Jewish populations, including Akko, Jaffa, Bat Yam, Haifa and Tiberias. Arab violence continued on Thursday night across the country.

On Friday, Israeli security forces arrested an imam with the Northern Branch of the Islamic Movement in Israel, Sheikh Kamal Khatib, in the town of Kafr Kanna.

Meretz Arab Knesset member Issawi Frej came out publicly in Israeli media in recent days condemning the rioting and violence, and seeking to calm the waters.

“At this time, it is forbidden to be silent! The anarchy in the streets of Ramle, Lod and other places threatens our existence as a society. We now have one task as public leaders—to work for calm, to [build] understanding between Arabs and Jews as neighbors and not enemies. Please, return to your houses and stop the violence,” he tweeted on Tuesday.

Rodayna Badir, an expert on Arab society in Israel, told JNS that “the Arab parties Hadash and Balad are the biggest enemies of Abbas’s Ra’am party.”

The internal Arab bickering is on Israeli-Arab social media, she said, adding that there “is extremely high competition over who is perceived to be the leader of Arab society and the resources this position has control of. The Joint List parties are jealous of Abbas because the media is only interviewing Abbas and talking about him all the time, while no one cares about them.”

“This has nothing to do with the Arab-Israeli conflict, but is all about money and power,” claimed Badir. “Why are no Arab politicians in Jerusalem protesting? It is because they do not care and are focused on gaining power and prestige.”

Abbas seeks to support the formation of a government, and in return, receive a massive budget for the Arab sector, which the Islamic Movement would control and use to strengthen its power.

Though she said talks are suspended, Lapid has signaled that discussions to form a government would continue despite the current violence with Hamas in Gaza.

Further, she said that the Joint List of Arab parties that include the Communist Hadash, the nationalist Balad and Ahmad Tibi’s small Ta’al Party should not be viewed as a single block, but as separate entities that have different interests.

The Arab parties joined forces for the election, but whether to join a government with Lapid or Bennett will be up to the individual parties.

Bishara Shlayan, an Israeli Christian Arab from Nazareth, said “the Arab political parties do not have anything to do with the daily lives of Israeli Arabs. I believe we must be integrated into society.”

Shlayan, who is the head of a party that ran in the past elections under the name, Alliance for National Union, stressed that “Arab Israelis must be part of every government.”

His party, which failed to get enough support to make it into the Knesset, says that instead of focusing on conflict, the emphasis should be on practical issues where Arabs and Jews can find common ground.

To that end, he said, “there needs to be cooperation between Arabs and Jews on day-to-day issues and for differences to be settled in the Knesset, not in the streets.”