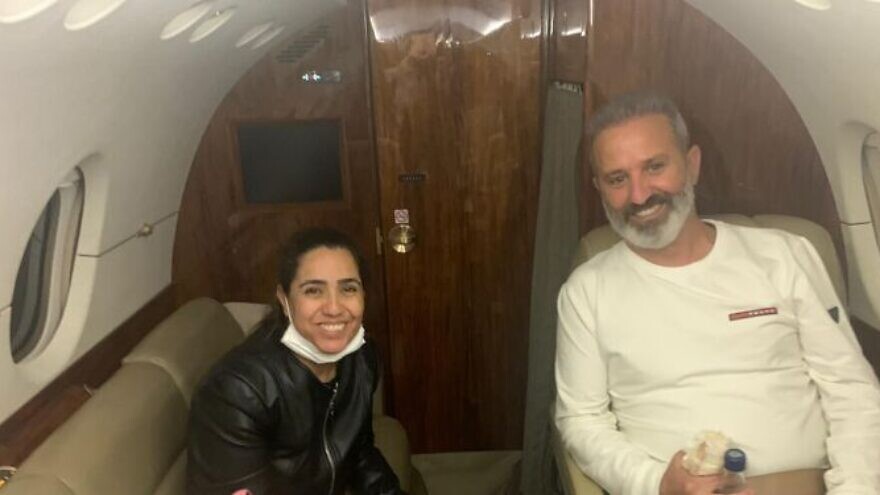 (November 18, 2021 / Israel Hayom) The Israeli couple detained in Turkey last week on suspicion of espionage touched down in Israel early Thursday morning, after being freed from jail in Istanbul. The couple, Natalie and Mordy Oknin, returned to Israel via a private jet dispatched by the Israeli government.

In a statement to the press from the balcony of the couple’s Modi’in residence, Natalie expressed gratitude for the efforts made to secure her and her husband’s speedy return.

The Oknin’s daughter, Shiraz, said, “My parents are back, and there is nothing better.”

The couple’s saga began on Nov. 11, when they were detained by Turkish security forces for photographing Turkish President Recep Tayyip Erdoğan’s residence from the observation deck of Istanbul’s Küçük Çamlıca TV Radio Tower, which provides a panoramic view of the city. According to the Turkish state-run Anadolu Agency, a member of the staff at the tower’s restaurant alerted the Turkish authorities.

Following their arrest, the Israeli government began intense diplomatic efforts to secure their release. Talks with the Turks were conducted via several channels, in coordination with Israel’s Foreign Ministry, the Mossad intelligence agency and the National Security Council.

A senior diplomatic official clarified to Israel Hayom however that “the Turks were not rewarded” for the couple’s release.

Israeli Prime Minister Naftali Bennett and Foreign Minister Yair Lapid thanked Erdoğan for his efforts on the couple’s behalf. A senior diplomatic official told Israel Hayom that it was Erdoğan’s intervention that brought the incident to an end.

“We would like to express our great appreciation to [them] for staying strong in a complex situation, as well as for the open and warm cooperation with the Foreign Ministry. Special thanks to President Isaac Herzog for his efforts to bring them home,” they said in a joint statement.

Herzog thanked Erdoğan on Thursday in a phone call for his personal involvement and contribution to the Oknins’ return, according to a statement from Herzog’s office.

Erdoğan told Herzog that he viewed relations with Israel as being of “key importance to the peace, stability, and security of the Middle East.”

Bennett is also expected to speak to Erdoğan soon.