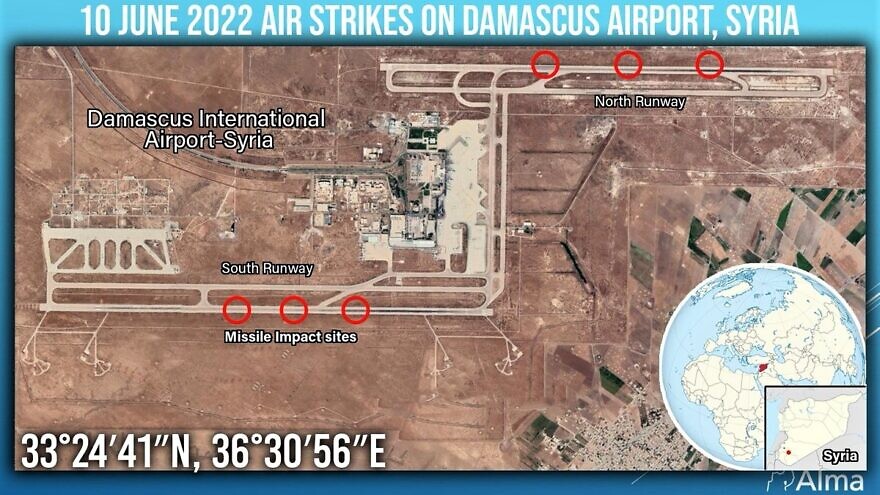 (June 14, 2022 / JNS) The Syrian regime led by President Bashar Assad risks losing its Damascus International Airport if Iran continues to use the site to smuggle advanced weapons to Hezbollah, the head of research at an Israeli defense research center has warned.

Speaking just days after international media reports said Israel struck its latest blow against Damascus International, Maj. (res.) Tal Beeri, head of the research department at the Alma Center, told JNS: “The message is clear. So long as Iran’s air corridor for smuggling weapons from Iran to Syria and Lebanon continues, the Syrian state will be seen as responsible by the attacking party. So long as Syria won’t act, the airport will continue to be a target.”

Future attacks could include a “roof knock”—dropping empty munitions to serve as a warning—on the airport’s control tower and destroying it after it is evacuated, assessed Beeri, or strikes on the airport’s radars.

“If the message isn’t received, attacks could escalate further, to the point that serious damage is caused to the airport, and it will take more than a few days to repair,” he said. “The messaging is not aimed at Iran—that is a lost cause. It is determined to continue trafficking arms to Hezbollah. It is aimed at Syria.”

Such strikes place Damascus in a dilemma and force it to conduct a cost-benefit analysis, he argued. Iran’s stepped-up weapons smuggling is also enabled by the fact that Russia’s attention is focused on its war on Ukraine and less on Syria these days.

Until the start of the war in Ukraine on Feb. 24, Russia had begun challenging some of Iran’s areas of control in Syria, said Be’eri, and it would likely have demanded that Iran stops using Damascus International Airport as a trafficking hub for rockets, missiles and precision components for projectiles that Israel has warned cross a red line for proliferation by the radical Iranian-led axis.

“In the end, the Syrians are in a trap,” said Beeri. “They invited the Iranians to assist them in the civil war. That has a cost, which is heavy because they ended up with a foreign entity on their soil that operates almost with full independence to pursue Iranian interests and goals, not Syrian ones.”

Iran is pursuing a long-term military entrenchment program in Syria while using it as a transit zone for moving weapons to Hezbollah warehouses in neighboring Lebanon. Beeri recalled that in addition to the air corridor, Iran has attempted to traffic arms via the sea, through Syria’s Latakia port, and uses a ground corridor as well via Iraq. All three have reportedly been disrupted by Israel’s “campaign between the wars” to dent adversary force build-up, and to sabotage Iran’s goal of encircling Israel with rocket and missile bases.

“The aerial corridors have been very, very active,” said Beeri. “Iran took advantage of ‘innocent’ passenger flights from Iran to Syria and injected cargo planes into this route carrying weapons.”

This cuts down the 1,800-kilometer (1,118-mile) trip time-wise—from a day of nonstop driving to a two-and-a-half-hour flight, skipping over challenging, unsecure terrain, said Beeri.

“Hence, they amplified this corridor,” he stated.

‘I don’t believe they will give up easily’

The Damascus airport is divided into a southern military zone and a northern civilian zone. Iran’s cargo planes can use both types of runways, and the Islamic Republic has built a ring of infrastructure within and around the airport for storing weapons that land there, and moving them by vehicle to eastern Lebanon’s Beka’a Valley, which is Hezbollah’s logistical heartland, according to Beeri.

“The airport has a full buffer zone, and storage and security systems to facilitate this movement of weapons from Damascus to the Lebanese border,” he said.

“There are many other airports in Syria,” he said. “If small equipment is being smuggled, as reports in Israel have said, they could also try to smuggle them through direct flight to Beirut or overland through Iraq,” he assessed. “I don’t believe they will give up easily on what they view as a strategic maneuver.”

Beeri said that while using Beirut-Rafic Hariri International Airport was a possibility for Iran’s Quds Force, which is responsible for clandestine overseas support for terror organizations, the working environment at Lebanon’s national gateway is less comfortable than that of Damascus.

“Despite the heavy presence of Hezbollah at Beirut’s airport, they are worried about others making Iranian activities public there—and there is no shortage of Lebanese who would do that,” said Beeri.

He recalled how in November, an Iranian national soccer team landed in Beirut for a game against Lebanon, and how quickly the Lebanese and Arab media reported the unusual number of suitcases carried by the players for a two-day visit.

“The media immediately made the connection to weapons,” said Beeri. “This is the kind of limelight Iran and Hezbollah fear.”