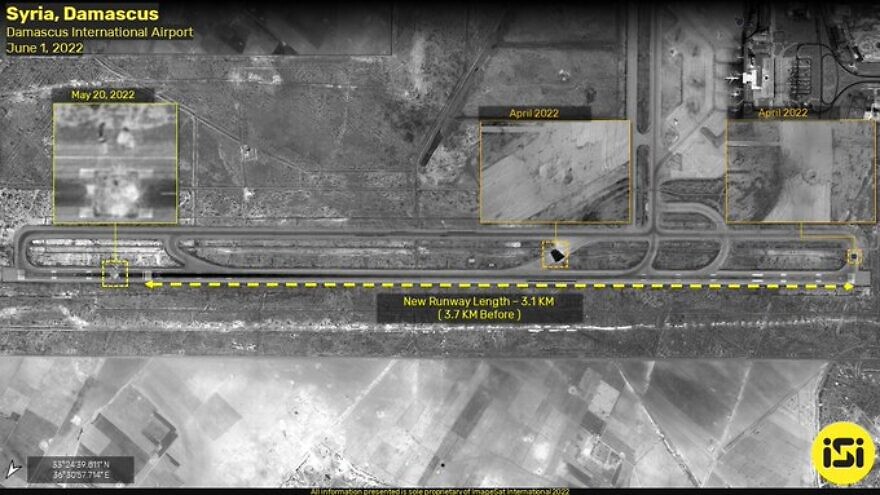 (June 12, 2022 / JNS) An alleged Israeli Air Force strike on the Damascus International Airport early on June 10 caused “extensive damage to both military and civilian runways,” according to ImageSat International, which published satellite photos of the aftermath of the incident.

Syria’s Transportation Ministry had halted flights in and out of the airport, the company noted.

The U.K.-based Syrian Observatory for Human Rights reported on Saturday that the airport’s old terminals, which they said had been used covertly by Iranian-backed commanders and Hezbollah, were completely destroyed. The northern runway, a control tower and warehouses were also damaged, according to the report.

A Syrian air force and intelligence delegation reportedly visited the airport to inspect the damage.

“It is worth noting that the northern runway was the only runway in service, after the southern runway was put out of service in 2021 due to Israeli strikes which targeted shipments and warehouses of Iranian-backed militias in the perimeter of the airport,” the observatory group reported.

Last week’s strike on Damascus International Airport was the 15th Israeli strike in Syrian territory this year, according to the report.

Reports surfaced last week that Iran was using civilian flights to Damascus and Beirut to smuggle advanced weapons components to Hezbollah, after an Israeli strike on the airport in May made it impossible for Iranian cargo planes to land there.