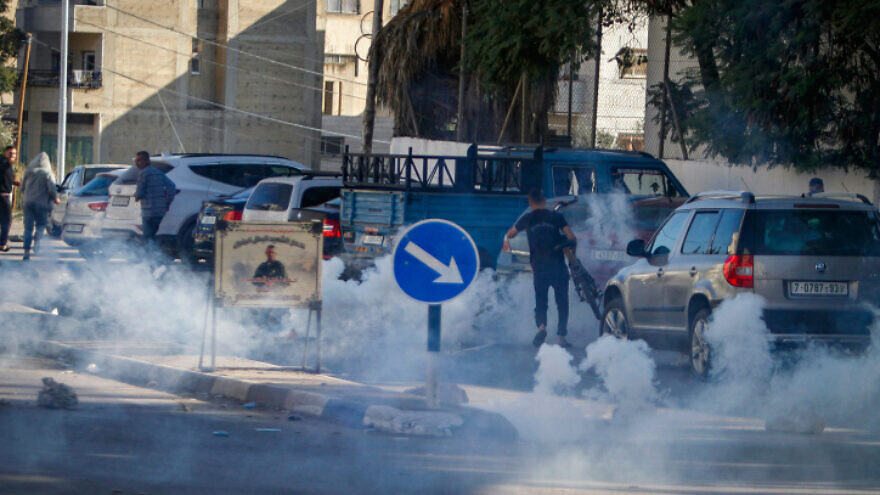 IDF soldiers surround a house during an arrest raid in the Askar refugee camp on the eastern outskirts of Nablus, Dec. 18, 2022. Photo by Nasser Ishtayeh/Flash90.
Spread the word.
Help JNS grow!
Share now:

(December 18, 2022 / JNS) The Israel Defense Forces arrested two Palestinian men in Nablus overnight on Sunday on suspicion of carrying out a drive-by shooting attack on an Israeli vehicle near the Havat Gilad outpost, north of Ariel in Samaria, on Friday.

The IDF said it acted on Shin Bet intelligence agency information to arrest Nasser Naqib, 47, a resident of the Askar camp in Nablus. Naqib served time as a security prisoner in the past and was a member of Fatah’s Tanzim terror militia, the IDF said.

Naqib’s son Mohammad, 21, was also arrested on suspicion of taking part in Friday’s attack, which did not result in injuries but did cause bullet damage to the vehicle targeted in the shooting.

Nasser Naqib is also suspected of trading in weapons, the IDF said.

“During the operation, a violent riot unfolded that included shots fired from the rioters at [Israeli] forces, who responded with riot dispersal means. When the forces exited [the area], large rocks were thrown at them and the forces responded with fire. A hit was identified,” the army stated.