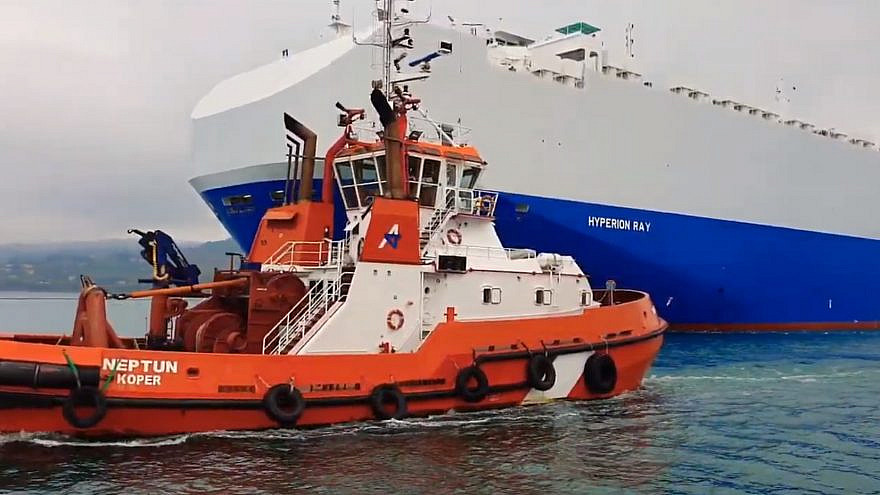 (April 13, 2021 / JNS) An Israeli-owned cargo ship reportedly came under Iranian attack and sustained light damage off the coast of the United Arab Emirates on Tuesday.

The Hyperion Ray was struck near the Emirate of Fujairah.

Israel’s Channel 13 said the ship was likely struck by a missile fired by Iran’s Islamic Revolutionary Guards Corps (IRGC). There were no reports of casualties.

According to Joe Truzman, a research analyst at the Foundation for Defense of Democracies’ Long War Journal, the ship is listed by marine traffic sites as a vehicle transporter.

It was the third known case of an Israeli-owned commercial vessel coming under an Iranian attack.

The incident comes as part of a series of reported tit-for-tat strikes at sea between Israel and Iran. While Iran is targeting cargo vessels, Israel is reportedly disrupting illegal oil-smuggling operations that are part of Iran’s Hezbollah-financing channel, as well as the Iranian trafficking of weapons to Iranian proxies in Syria.

On April 6, the Iranian ship Saviz in the Red Sea, used by the IRGC as a command and surveillance ship, was reportedly struck by a limpet mine, causing damage and leaving the vessel stranded, but no casualties.

The Iranian oil-smuggling is occurring despite U.S. sanctions on both the Islamic Republic and the Assad regime. According to reports, Damascus has been paying for the oil by transferring cash directly to Iran’s proxy in Lebanon, Hezbollah, thereby circumventing the Syria Caesar Protection Act, which bans international transactions with Syrian banks.