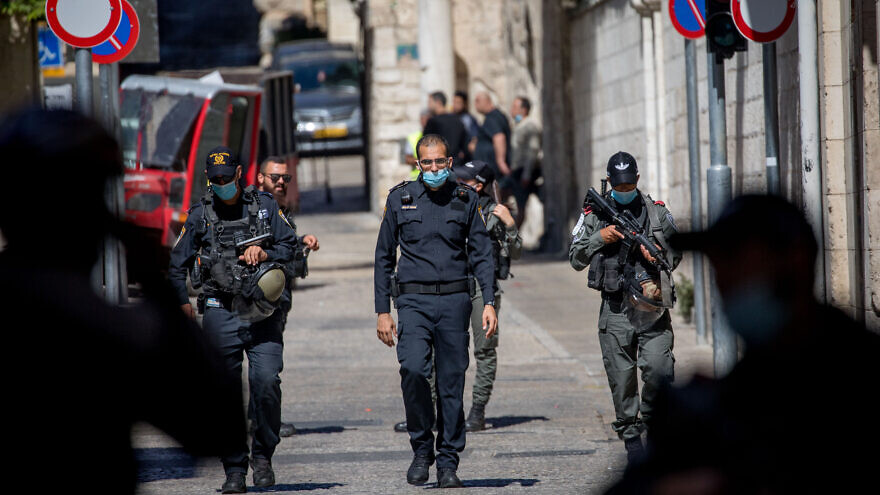 Israel Police guard the scene of the shooting of Iyad Halak at the Lions' Gate in Jerusalem's Old City on May 30, 2020. Photo by Yonatan Sindel/Flash90.
Spread the word.
Help JNS grow!
Share now:

(March 30, 2022 / JNS) The Israel Police say they need 4,000 to 5,000 additional permanent officers, and 5 billion extra shekels to address gaps in personnel and human resources and meet its resources, Ynet reported on Wednesday in the wake of a deadly wave of terror attacks.

It described “gaps that have existed in the police for years, but during ‘Operation Guardian of the Walls,’ they became prominent due to the police’s inability to deal with all of the incidents alongside continuing routine activities.”

According to the report, the police’s leadership is tired of “temporary solutions” and is calling for a significant “strengthening of our forces.”

Meanwhile, Israeli Prime Minister Naftali Bennett released a statement via video on Wednesday addressing Israeli citizens, during which he announced the formation of a new “Border Police Brigade” in the wake of a spate of terror attacks.

“The Israel Defense Forces, Shin Bet and Israel Police all significantly increased their intelligence coverage in order to preemptively reach anyone planning an attack. We also boosted the presence of firearms-wielding uniform-wearing officers throughout the country. From my perspective, there is no limit to resources,” he said.

“Citizens of Israel, during these days, we are experiencing a murderous terrorism wave, and like every previous wave, this time we will also overcome it together,” said Bennett. “The defense establishment has been working in the past 24 hours on full power to return security to Israeli cities and to bring back your sense of security.”

Meanwhile, the IDF has banned soldiers from going on home leave until Friday if they serve in the Judea and Samaria Division.