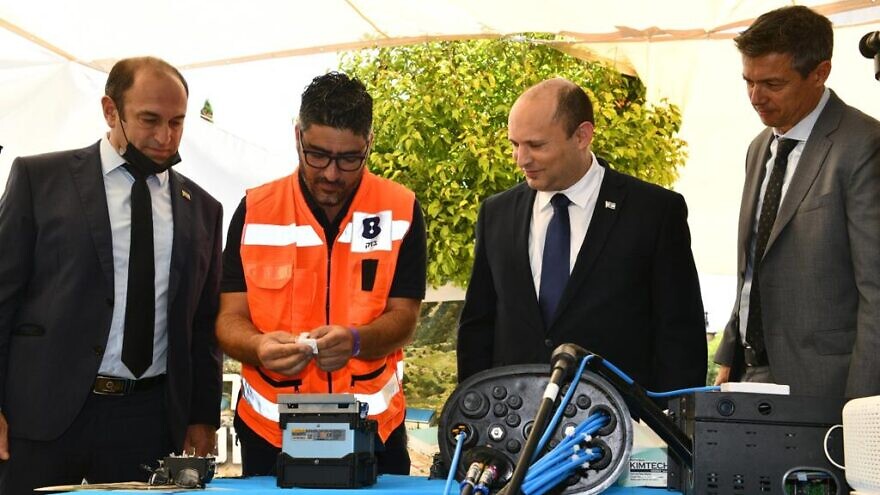 (July 20, 2021 / JNS) Israeli Prime Minister Naftali Bennett and Communications Minister Yoaz Hendel dedicated the “fiber-optic connection” in Ma’alot-Tarshiha in the north of the country on Tuesday.

“Today is a holiday for the residents of the area, the residents of the Galilee as a whole and the periphery,” said Bennett at the inauguration ceremony, in the presence of Ma’alot-Tarshiha Mayor Arkady Pomerantz, Bezeq CEO David Mizrahi, Communications Ministry Director General Liran Avisar Ben-Horin and other officials.

“The periphery interests us very much,” Bennett continued. “This is a national goal for us. The significance of joining the periphery and the entire State of Israel to fiber-optic cables for the economy is immense. It dramatically increases GDP, because everything is going to be quicker and easier. More business and better education reduce crowding on the highways and air pollution, and encourages start-ups in every place that is connected.”

“As a former high-tech CEO, I can tell you that the absence of Internet infrastructure simply prevents the establishment of companies,” he added. “If it is slow, I cannot set up a company.”

Calling the day’s event “historic,” Hendel said, “Fiber-optic cables are the most important engine of economic growth now spread out in Israel. The labor market has grown by 3 percent, the GNP by 1.1 percent … and the most important thing is the reduction of [socioeconomic] gaps.”

“Internet based on fiber-optic cables is like the spread of the National Water Carrier, the availability of electricity in every home and a telephone for every worker,” said Hendel.

“In any other country, they would have told us that connecting the north was not economical and that ‘there is no profitability.’ However, we have an outlook called Zionism. This connection is not just one of cables, but of values. This is our way, a plumb line, a fiber, the development of the center alongside that of the Galilee and the Negev,” he added.

An increasing number of Israeli cities are being connected to fiber-optic cables as part of the communications-infrastructure reform advanced by the Communications Ministry over the past year, the Prime Minister’s Office said in a statement.

According to the plan, which was approved in the framework of the reform, distant cities and communities in the north and south of the country will be connected to fast Internet, the statement said.