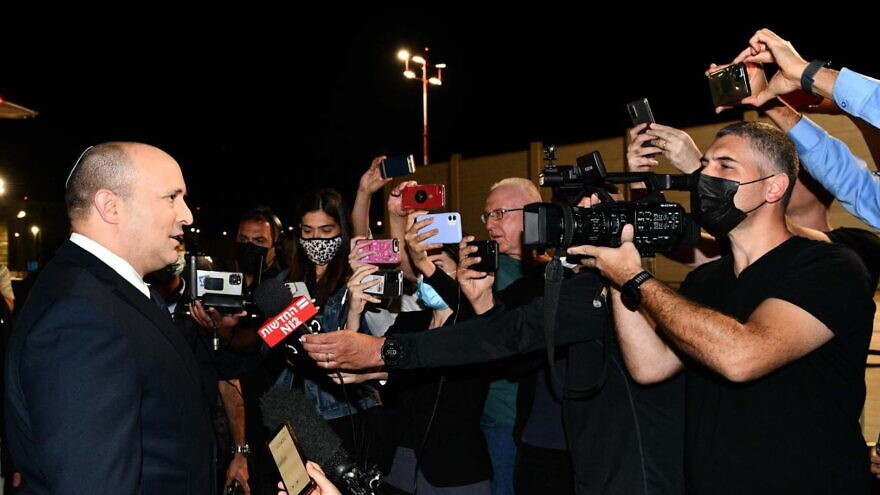 (September 26, 2021 / JNS) Israeli Prime Minister Naftali Bennett set off for New York on Saturday night, saying he looked forward to presenting Israel’s voice to the world at the U.N. General Assembly on Monday.

Addressing reporters before boarding his flight, Bennett noted the “sweeping victory” in the United States House of Representatives, which passed a standalone bill to provide $1 billion in funding for the Iron Dome missile-defense system, after a group of Democratic lawmakers forced the removal of that provision from a larger bill.

“At the moment of truth, we saw the representatives of the American people overwhelmingly support Israel, 420 to 9, in the vote on rearming the Iron Dome,” Bennett said. “There is a small anti-Israel group that makes a lot of noise, but these people failed.”

On a separate issue, he said, “We do not define ourselves according to others, not according to Iran and not the Palestinians. I suggest that their leaders deal with their people, in improving their situation, and stop this obsession with the State of Israel.”

Palestinian Authority leader Mahmoud Abbas, in a pre-recorded video address to the U.N. General Assembly on Friday, demanded that Israel return to its pre-1967 borders or face consequences.

Abbas threatened to confront the Jewish state at the International Court of Justice in The Hague. He also defended the P.A.’s policy of paying terrorists who carried out attacks against Israeli soldiers and civilians.