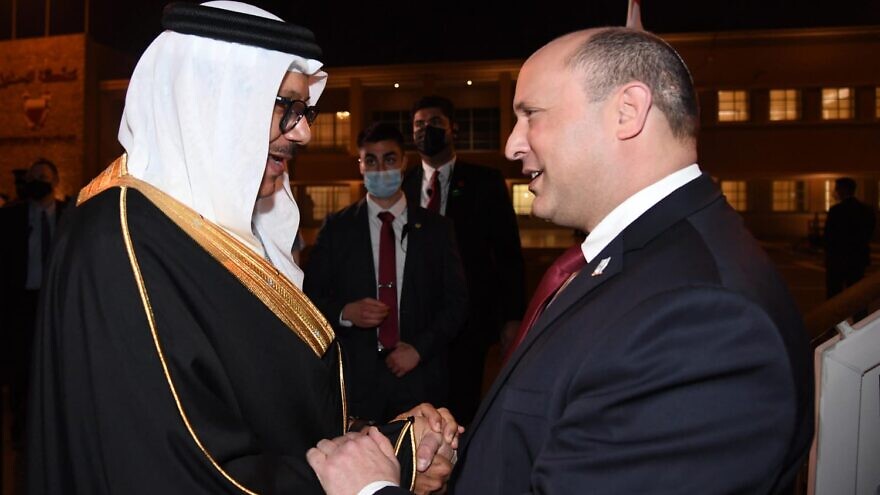 (February 15, 2022 / JNS) Israel and Bahrain are dealing with security challenges that stem from the same source: Iran, Israeli Prime Minister Naftali Bennett said in an interview with the Bahraini paper Al-Ayam that was published on Tuesday morning.

“Iran supports terrorist organizations that operate in your region and in our region in order to achieve one goal, which is to destroy moderate countries that care about the welfare of their people and want to achieve stability and peace, and install blood-thirsty terrorist organizations in their place,” said the prime minister. “We will not allow that … Iran destabilizes the region.”

He said Israel is “fighting Iran and its henchmen” in the region day and night, and that the country, if asked, would “help our friends” do the same, in the name of promoting peace, security and stability.

Bennett arrived in Manama, the capital of Bahrain, on Monday evening, the first visit to the country by an Israeli prime minister. Israel and Bahrain signed the Abraham Accords normalization agreement in September 2020.

In his interview, Bennett fell short of criticizing U.S. President Joe Biden, who is eager to rejoin the 2015 Joint Comprehensive Plan of Action, otherwise known as the Iranian nuclear deal, against Bennett’s warning.

In response to a question about the prospects of the United States reaching a nuclear agreement with Iran, Bennett said: “We believe that concluding an agreement with Iran constitutes a strategic mistake because this agreement will enable it to maintain its nuclear capabilities and to obtain hundreds of billions of dollars that will strengthen its terrorist machine that harms many countries in the region and in the world.”

In February, Israel joined the U.S.-led International Maritime Exercise 2022 (IMX 22) in the Middle East, alongside Saudi Arabia and Oman, two Gulf countries with which Israel has no diplomatic ties. The decision to take part in the exercise—a first for Israel—came amid increasing tensions in the region, including recent rounds of missile attacks against the United Arab Emirates by the Iranian-backed Houthi rebels in Yemen.

When asked about the implications of joining such an exercise, the prime minister said that “Israel is a tangible military force in the region and possesses unprecedented operational capabilities in the air, sea and land. We are focused on expanding the scope of military cooperation with our friends in the region in order to enhance security and stability.”

He added that “over recent years, we have strengthened our military cooperation with countries in the region, whether Arab or non-Arab. We all understand that we face the same challenges, so why not work together to tackle them? Israel is a strong and reliable country.”

Bennett also expressed thanks to Bahraini Crown Prince Salman bin Hamad Al Khalifa, who invited him to Bahrain, and said that he looks forward to the Israeli and Bahraini people getting to know each other better through tourism, cultural events and religious meetings.

“We want a very warm peace with Bahrain,” he said.