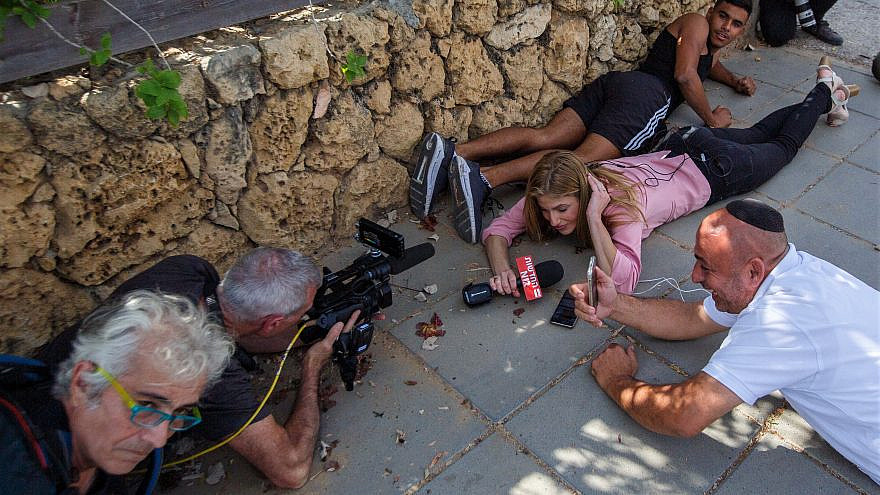 Members of the press take cover as a Red Alert siren sounds a warning of incoming rockets fired from the Gaza Strip into Ashkelon in southern Israel, May 20, 2021. Photo by Edi Israel/Flash90.
Spread the word.
Help JNS grow!
Share now:

(May 20, 2021 / JNS) An Israel Defense Forces soldier was lightly injured by shrapnel after a Gazan terror faction fired an anti-tank missile at a bus in southern Israel. The military said the soldier was standing next to the bus during the attack.

As of 7 a.m. on Thursday, Hamas and Palestinian Islamic Jihad have fired more than 4,000 rockets at Israel, with around 600 of them falling short and exploding in Gaza.

The Iron Dome air-defense system has maintained an intercept rate of some 90 percent, the IDF said.

After a relatively quiet night, with both the IDF scaling back its attacks on military targets in Gaza and a reduction in terrorist rocket fire, fighting picked up again on Thursday when Gaza-border communities came under repeated rocket attacks.

Officers from the IDF’s Research Department in the Military Intelligence Directorate said the critical mass of targets they had collected for years on Hamas and Palestinian Islamic Jihad have been destroyed in a remarkably short amount of time, reported Ynet, while new targets are being generated around the clock, the sources said.