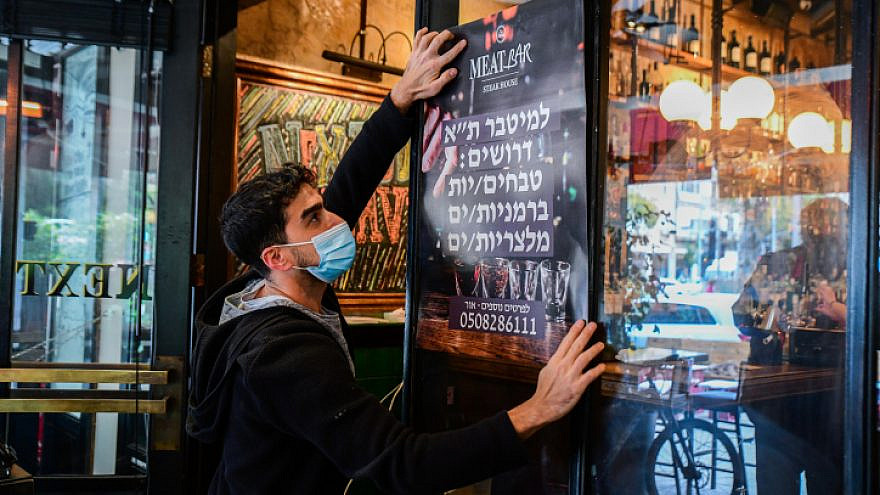 A worker in Tel Aviv prepares for the opening of restaurants in Israel, March 3, 2021. Photo by Avshalom Sassoni/Flash90.
Spread the word.
Help JNS grow!
Share now:

(March 3, 2021 / JNS) Ninety percent of Israelis over the age of 50 have been vaccinated or have recovered from COVID-19, said Israeli health minister Yuli Edelstein on Wednesday.

Seventy-five percent are eligible for a “Green Pass,” noted Edelstein, meaning that they received their second vaccine more than a week ago, or have recovered from the virus and have antibodies.

He continued to urge all Israelis to “follow the guidelines.”

One month ago on Feb. 3, Israeli Prime Minister Benjamin Netanyahu proposed a “national goal” of vaccinating at least 90 percent of the over-50 age group, saying this would be the key to successfully exiting the lockdown. At that time, 77 percent of those aged 50 or over had been vaccinated.

“Ninety-seven percent of those who have died are in the 50-and-over age group,” he said at the time, noting that 93 percent of all serious cases fall in this group as well.

The third phase of the Health Ministry’s reopening plan is scheduled to begin on March 7. The plan includes the opening of more in-classroom education and entrance to indoor dining, hotels, events and conferences for “Green Pass” holders. In addition, during the third phase, outdoor dining will be open to everyone.

However, in an interview on Wednesday, Israel’s Deputy Health Minister Yoav Kisch said the plan may be put on hold because of the growing reproduction rate of the virus, which climbed to 1 on Monday.

“There is a huge difference between a basic reproduction number that is below 1, which means a declining epidemic, and higher than 1, which means an expanding epidemic,” said Kisch, speaking to Ynet. “If the R number rises significantly, we will not approve another reopening, we will recommend halting it.”

“Nothing is a done deal. On Thursday, a decision will be made based on coronavirus data,” he added.

Diagnosed cases of the virus, which had been on the decline since Feb. 21, began to rise on Monday with more than 4,265 new cases reported since then. However, the number of serious cases, which now stand at 717, has decreased since Feb. 7.