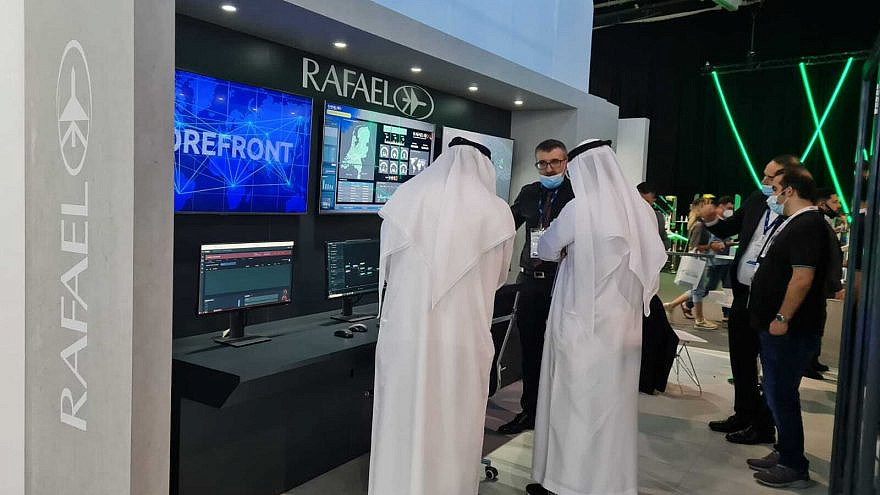 (June 24, 2021 / JNS) The world is waking up to the emerging threat of cyber-attacks, which can lead to physical damage and casualties, an Israeli defense company executive told JNS.

“War is not just about missiles today, it is also about harming critical infrastructure—the blood flow of a country,” said Michael Arov, head of the Cyber Business Unit at Rafael.

Earlier this month, Rafael announced the establishment of a new consortium of Israeli companies to provide cyber security for operational technologies in Dubai. Rafael made the announcement about the new Israeli Operational Technologies Cyber Consortium at the GISEC (Gulf Information Security Expo and Conference) Global 2021 event.

The new consortium will provide end-to-end, cyber-operational solutions for clients around the world.

This kind of cyber security—defending operational technology—differs from the need to defend information technology, servers and Internet networks, he explained.

“While Information Technology includes things like Windows, Linux, daily computing tasks, processing transcripts, Word, excel, gaming … operational technology are systems that control electro-mechanical systems; these are physical processes. Things like a turbine, or transferring food on a conveyer belt, or air conditioning—all of these systems are controlled by computing,” said Arov.

Threats to operational technology are seen as a high-priority issue in the United Arab Emirates and other Gulf states that rely on many such systems in a desert climate, he added.

This includes water desalination plants, electricity production from oil and nuclear power, solar-energy plants and the management of very large seaports. “There is a lot of dependence on operational technology in this region,” said Arov.

Hostile state actors have an interest in developing capabilities that can seriously damage operational technology within rival states.

During conflicts, attempts are likely by hostile actors to harm sensitive targets such as the electrical grids of states, Arov cautioned. Such an attack, if successful, could be more harmful than a weapons strike. This area of cyber security also covers the ultra-sensitive sector of aviation.

“As soon as an attacker hits such a system, it can cause electrical faults, or a train to derail, or other physical processes. These are attacks that can kill people. They are not just website defacement, theft of money or theft of ID. They can lead to explosions,” he emphasized.

‘We saw no reason to remain in-house’

Before starting to think about selling cyber-security solutions abroad, Rafael had been defending its own software and hardware elements (known as supervisory control and data acquisition, or SCADA, systems) against cyber attacks.

“From the moment we built a number of in-house products, we saw no reason to remain in-house,” said Arov.

Rafael began to create products for exports and also decided to unify Israeli companies that offer such services under a cyber consortium.

The companies can protect transportation, oil and gas, manufacturing, water and sewage, energy infrastructure and more.

Rafael is the prime contractor of Israel’s national Cyber Emergency Response Team (CERT), which is based in Beersheva. CERT is made up of groups of responders who kick into action in the event of major cyber attacks. CERT provides key backing for the finance, transport and critical infrastructure fields in Israel.

The setting up of the consortium received the backing of the Israel National Cyber Directorate, which is responsible for all aspects of cyber defense in the civilian sphere in Israel.

“The purpose is to unify forces,” said Arov. Under Rafael’s leadership, a group of companies “that have something to say about operational technology and industrial control systems created the consortium,” he said. The consortium works together in both marketing and the implementation of solutions.

It is made up of two types of companies. The first is a company that is a “domain expert” in its field, such as the Israel Electric Corporation. The second type offers products based on technology and knowledge of cyber security.

“We created a connection between domain experts and product companies,” said Arov.

Arov has identified a rise in such types of attacks. According to international media reports, Iran attempted to launch a cyber attack on Israel’s water supply, leading to a poisoning of the water in April 2020.

The consortium will include Rafael and the Israel Electric Corporation, and will host large, medium and small Israeli companies.

“Ultimately, this is a very important issue for us,” said Arov. “We are pushing for the creation of an Israeli ecosystem in the form of the consortium.”