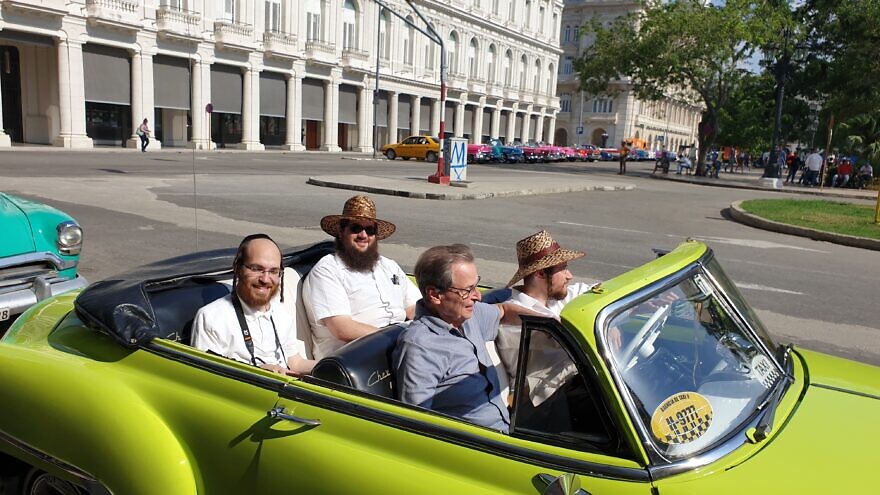 Saul Berenthal (front left), 75, was born and raised in Cuba but left for Miami in 1960, following the 1959 Castro revolution. He is pictured here in Havana, cruising around in a classic 1950s American-made car. Credit: Courtesy.
Republish this article
1057 WORDS
Spread the word.
Help JNS grow!
Share now:

(November 13, 2020 / JNS) Experts in global Jewish history believe that highlighting minority voices within the Jewish community has the power to honor its nuances and interconnectedness. JNS’s new series highlighting Jewish ethnic minorities aims to elevate their voices, and in turn, celebrate the beautiful mosaic that is the Jewish people.

Saul Berenthal, 75, was born and raised in Cuba but left for Miami in 1960 following the 1959 Castro revolution. His parents were refugees, having fled the wars in Europe and settling in Havana after U.S. quotas were enacted.

Berenthal was educated in a Cuban military school and later built successful businesses in the United States, achieving the proverbial American dream.

According to his son, Scott, Berenthal was one of the principals behind the Oggun tractor initiative, to whom the Obama administration granted the first license to do business in Cuba in more than 60 years. “As that initiative fell out of favor with the Cubans for political reasons,” Scott told JNS, “we turned to other sectors to identify opportunities to help the people, including its Jews, prosper.” 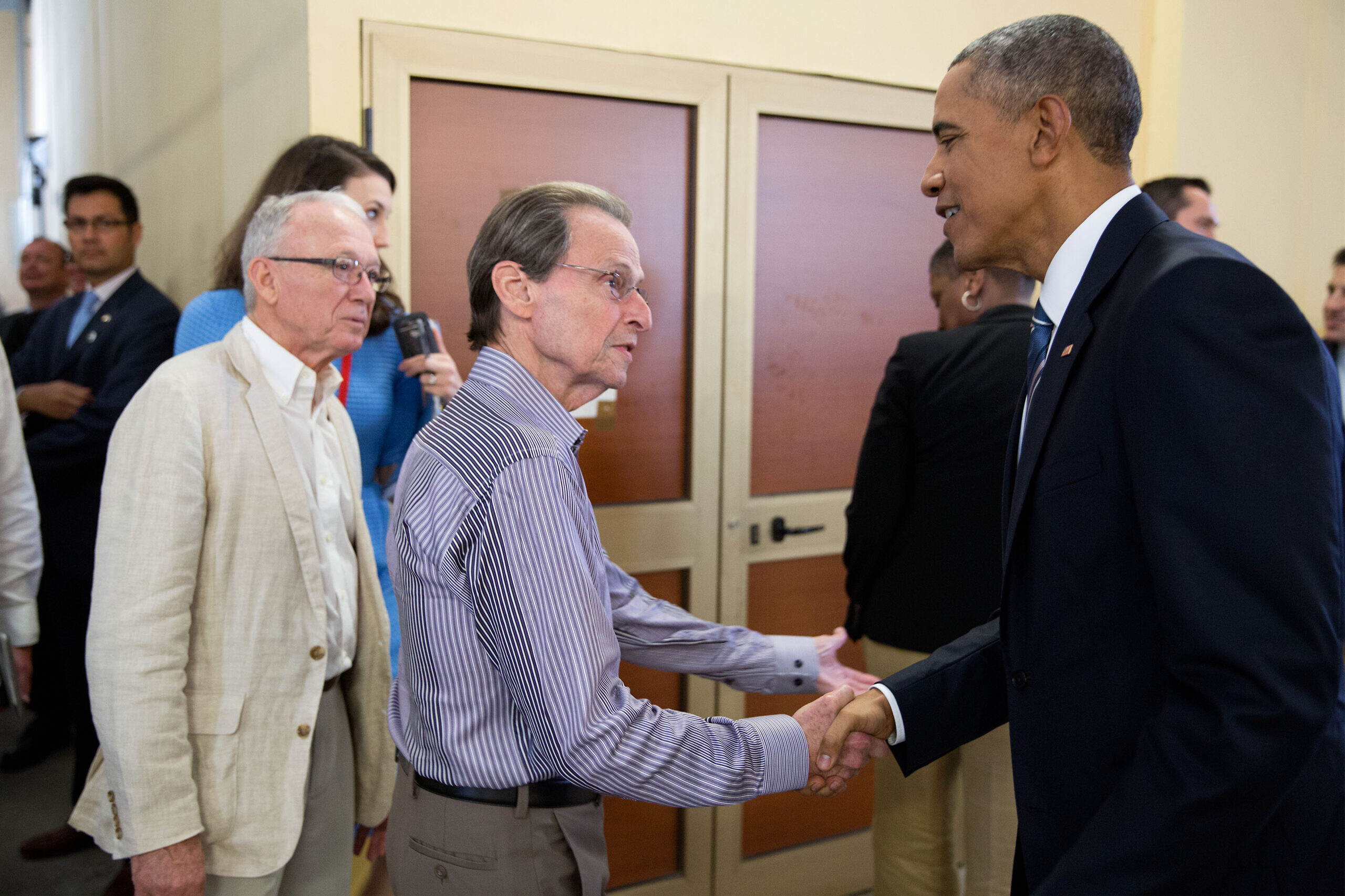 Berenthal owns and operates Cuba’s first and only kosher boutique hotel with its mission of providing kosher food and a suitable environment for Jews visiting from abroad, many of whom bring aid to the small Jewish community that still remains in Cuba.

“With travel being a major facet of the local economy,” explained the younger Berenthal, “we’re able to allow people to see and explore a country wrapped in mystery and contradiction, and experience the wonders of a small, but proud Jewish community.”

The first Jews who came to Cuba came with Columbus, explained Berenthal; in fact, the financiers of the voyage were Marranos, Spanish and Portuguese Jews who had been jailed for refusing to convert to Catholicism. Larger-scale immigration began during the Spanish-American war when Jewish soldiers fought in Cuba and later decided to establish themselves there. Following World War I and World War II, Jews who were unable to immigrate to America settled in Cuba and prospered there as middle- to upper-middle-class merchants.

‘Jewbans’ in the United States

Cuban Jews worked largely as merchants in Havana, though following the Communist revolution, they didn’t have a way to make a living under the economic model. Most left for Miami, which Berenthal calls a “big little Cuba,” with the Jews there affectionately nicknamed “Jewbans.”

While they are not a unified ethnic minority group per se—as Jewish Cubans come from both Sephardi and Ashkenazi origins—Berenthal said that they consider themselves a minority within the United States, though he noted that the concept of a minority is different in Cuba, where “everybody is considered equal and there are no distinctions.” 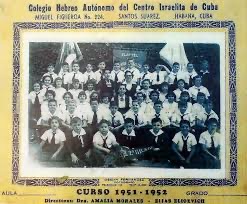 Jewish Cubans represent a prosperous community in the United States, as they were the well-educated merchants and elites of Cuba. Berenthal compared Cuban Americans who left to Jews who left Germany: “There is still a lot of resentment and hate towards Cuba, as the government closed and repossessed their businesses, and properties were lost.”

“I understand it, but I don’t want to share in the grief,” said Berenthal, who set up an office for one of his businesses in Hamburg, Germany, despite the fact that his father’s family were Holocaust victims. “I asked my father, and he said that if we are ever able to make up for what we lost—to do it legally and constructively, making money, prospering and contributing to the economy—is something that is positive.”

“When Obama opened up businesses, I said to my friends, ‘What they took, they took, so if we have a chance to make up for it now, why not?’ The people who [took our businesses] are not alive anymore.”

The bond that Berenthal has with Cuba is rare, he acknowledged, as most Jewish Cubans in America do not return home. “We are a disappearing group because of assimilation,” he said.

At the same time, noted Berenthal, it is becoming increasingly common for the younger generation to travel back on a heritage trip. The Cuban Jewish community in the United States also still retains some cultural customs from their native land, which Berenthal says can be witnessed through the culinary traditions. The non-Orthodox Jews celebrate Jewish holidays, he explained, with the exception of Passover, “in the same way Cubans celebrate Christmas—they throw a big party and roast pork.”

Today, the Jewish community in Cuba numbers just 800 to 1,200 people, and according to Berenthal, “being Orthodox in Cuba is almost an impossibility.” That was one of the reasons why the family opened the hotel, to “give a flavor of difference, and for the ability to provide kosher food and kosher ambiance for people who want to come and visit.”

There are three synagogues—a very small Orthodox one, a Sephardic one and the largest, an Ashkenazic one—and the Cuban government helps to reconstruct them, as well as the Jewish cemetery. 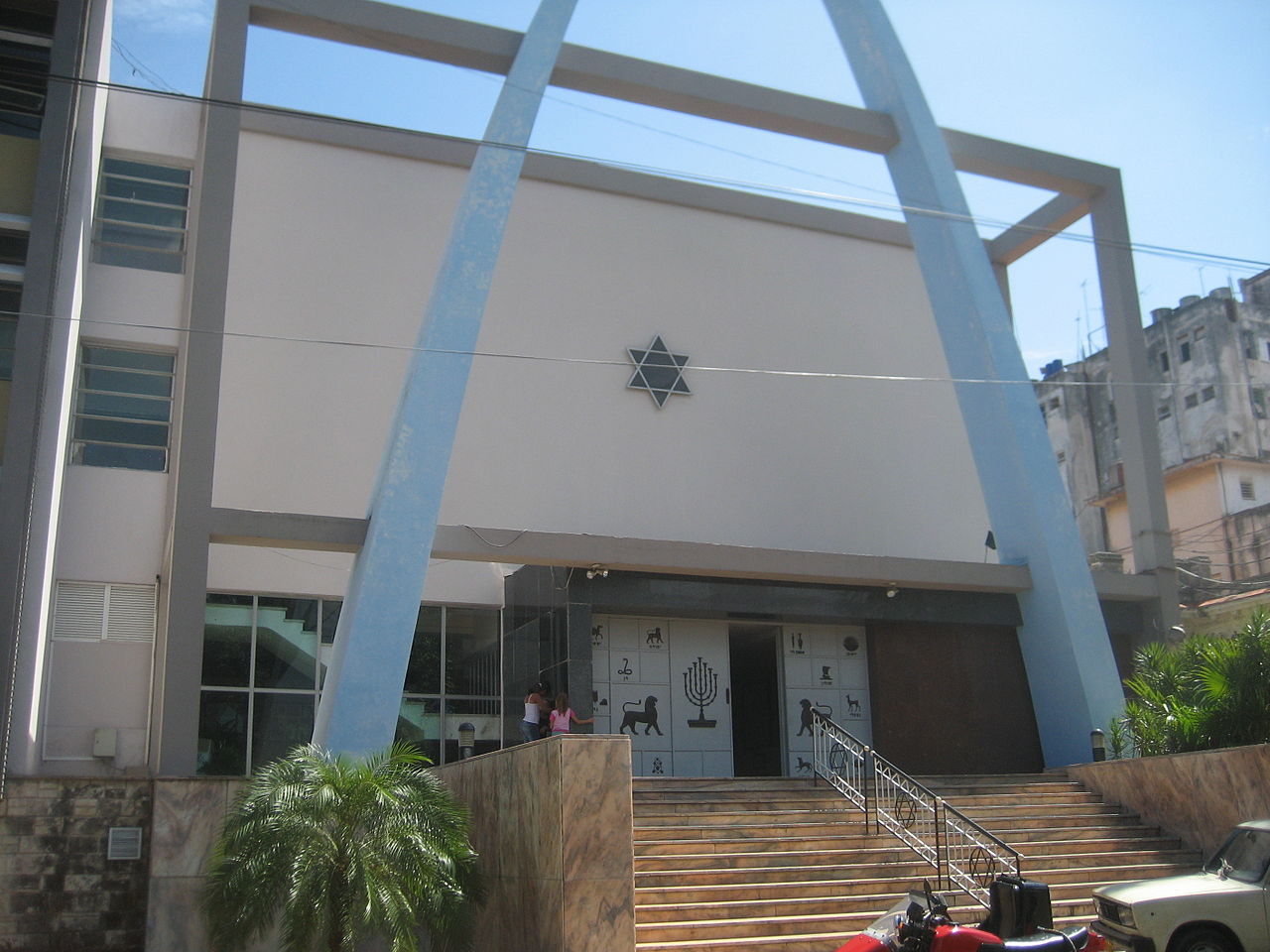 The exterior of the Beth Shalom Temple in Havana, Cuba. Credit: Wikimedia Commons.

The current coronavirus pandemic and political climate, said Berenthal’s son, “are making for extraordinarily difficult circumstances, and the people of Cuba, including the Jews of Cuba, are suffering.”

Over the years, explained the younger Berenthal, Jews have traveled to Cuba to see and experience what was once one of the largest Jewish communities in the region prior to the revolution. “They have brought vast quantities of medicine, food, supplies and aid to the point where the pharmacy at the Patronato synagogue has historically been better stocked than most state and even retail outlets,” said Scott. “Sadly, the lack of travel and continued punitive U.S. economic policy has forced them to reduce their supplies to dangerously low levels, with many items no longer available, including medicine. These are unfortunately desperate times for the community, and its survival hangs on the precipice.”

As it’s difficult to send aid to Cuba now, related Berenthal, “we have to think of other ways to become less dependent on charity and more self-sufficient, perhaps by participating in business opportunities.”

Berenthal hopes to return to Cuba in December to make a plan with the community and decide how to move forward, and he feels “very optimistic” about improving commercial ties between the United States and Cuba’s private sector. “Political issues will take time,” he acknowledged, “but having the will on both sides to become better neighbors will make it easier.”