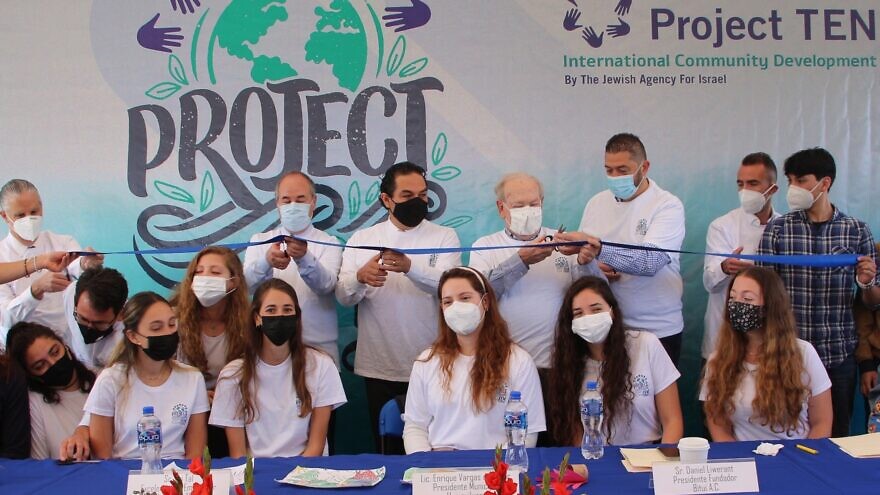 (August 23, 2021 / JNS) In response to needs arising from the coronavirus pandemic, the Jewish Agency for Israel has launched a new volunteer center for the Project TEN service-learning program in Chimalhuacán, Mexico City, in collaboration with the Jewish nonprofit CADENA and support from Keren Hayesod.

The new center will draw volunteers from Israel and around the Jewish world for three-month-long tikkun olam projects to help empower children and teens in Mexico City through educational and community activities.

In Israel and developing regions worldwide, Project TEN enables volunteers to participate in an integrated curriculum focusing on Jewish values and community, as well as to engage in a global dialogue on Jewish identity with their peers.

The opening ceremony/ribbon-cutting for the new center was held at the Shimon Peres Park in the municipality of Chimalhuacán and attended by Israel’s Ambassador to Mexico Zvi Tal; the head of the Jewish Agency in Mexico, Ari Messer; the local mayor; and senior leaders of the Jewish community in Mexico.

Previously, Project TEN operated in Mexico in the province of Oaxaca, but the center was shut down during the pandemic. The move to open a new volunteer center was led by Daniel Liberant, a leader of the Jewish community in Mexico, with the goal of assisting the local population during this challenging period.