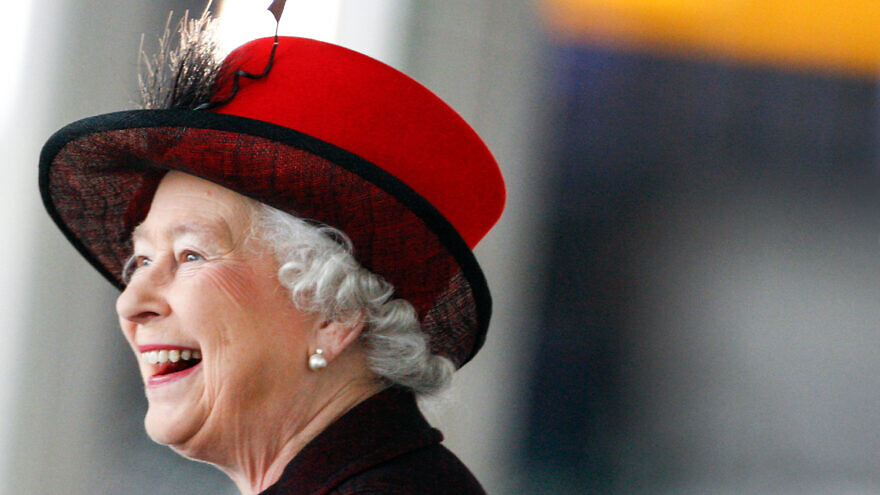 The longest ruling monarch in British history’s death comes after years of deteriorating health. She was surrounded by the royal family, including her children at Balmoral Castle in Scotland.

“The Queen died peacefully at Balmoral this afternoon. The King and the Queen Consort will remain at Balmoral this evening and will return to London tomorrow,” said Buckingham Palace in a statement.

The Queen has been succeeded by her son Charles, Prince of Wales, who is married to Camilla, Duchess of Cornwall.

Israeli Prime Minister Yair Lapid took to Twitter to express condolences, calling the Queen “an extraordinary figure, a unique leader who symbolized devotion and love for her homeland.”

“On behalf of the people of Israel, I mourn her passing and participate in the heavy mourning of the grieving British people and the British League of Nations, who lost the mother of the nation. She was a historical figure—lived the history, created history and left a glorious and inspiring legacy,” he wrote on Twitter, extending his condolences to King Charles and the royal family.

“During her long and significant tenure, the world changed dramatically, and in the face of this change she was a symbol of stable and responsible leadership, and a beacon of morality, humanity and patriotism,” he added. “In her life and in her service to her people, she reflected the spirit of deep-rooted tradition, integrity and mission.”

Chief Rabbi of the United Kingdom Ephraim Mirvis released a video message on Twitter praising the queen, saying she “embodied the most noble values of British society.”

“Throughout her extraordinary reign, she conducted herself with grace, dignity and humility and was a global role model for distinguished leadership and selfless devotion to society. In an ever-changing world, she was a rock of stability and a champion of timeless values,” he added. “Every week in synagogue we have prayed for her welfare, wellbeing and wisdom and she never let us down.”

He applauded her “warm relationship” with the Jewish community, adding that she had a particular commitment to “interfaith relations and Holocaust memorial.”

“I recall how, on one occasion, she showed me and my wife items of Jewish interest and value in her private collection in Windsor Castle, including a Torah scroll rescued from Czechoslovakia during the Holocaust. Her affection for the Jewish people ran deep, and her respect for our values was palpable,” he said.

“She never let us down.” The Chief Rabbi responds to the passing of Her Majesty The Queen. pic.twitter.com/Y3zfw9VEdC

The Conference of European Rabbis released a statement saying, “Together, Chief Rabbi Mirvis and the U.K. and the U.K. Jewish community, the Conference of European Rabbis (CER), its President Rabbi Pinchas Goldschmidt and the chairman of its Standing Committee Dayan Menachem Gelley join in mourning the passing of HM Queen Elizabeth II. Her dignified, devoted leadership will endure as an exemplar model for all. May her family find comfort.”

Michael Goldstein, president of the United Synagogue, the largest synagogue body in Europe, called the Queen “a constant for generations of United Synagogue members, the wider Jewish community and the nation at large.”

“Since 1952, when Her Majesty the Queen ascended to the throne, there have been more than a dozen versions of the Prayer for the Royal Family to reflect changes to the royal family: marriages and, sadly, deaths,” he said. “The one constant in the prayer throughout the last 70 years has been ‘Our Sovereign Lady, Queen Elizabeth.’ ”

“With a heavy heart, we shall now be issuing a new prayer to our communities as we join together to pray that God blesses our new King and puts a spirit and wisdom into his heart and into the heart,” he added.

“Along with so many others, Jewish citizens of the British Commonwealth will deeply mourn the loss of Her Majesty The Queen—she was a steadfast friend of the Jewish community throughout the many decades of her reign,” said Michael Dickson, the executive director of StandWithUs Israel on Twitter. “May the memory of Queen Elizabeth II be a blessing.”

“During her 70-year reign, Jewish communities in Great Britain, Scotland, Wales, Northern Ireland and across the Commonwealth have flourished and grown in peace and security,”  tweeted the World Jewish Congress.

‘Principles of tolerance and human dignity’

The Simon Wiesenthal Center expressed sorrow for her passing, pointing out the importance of the Queen taking power after World War II.

“At the end of the most horrific war humankind ever experienced, when people the world over, questioned whether there were brighter days in their future, Princess Elizabeth ascended the throne as Queen of England and helped pave the road to a future of hope and decency,” Simon Wiesenthal Center said in a statement. “Ever since, the Queen has dedicated her life to the principles of tolerance and human dignity, helping to preserve and build on the legacies of Sir Winston Churchill and the sacrifice of millions who defeated Nazism.”

The center also highlighted the Queen’s “great empathy and respect for the Jewish survivors of the Nazi Holocaust. We remember how moved our namesake Simon Wiesenthal was to receive an Honorary Knighthood from the Queen, shortly before his passing.”

The Jewish Agency for Israel, the European Jewish Congress and the American Jewish Committee also expressed their condolences.

Our thoughts and deepest sympathies are with the family of Her Majesty Queen Elizabeth II, together with the citizens of the UK & The Commonwealth. For over 70 years, Her Majesty Elizabeth II, the Queen of England, served her people and country. May her memory be for a blessing. pic.twitter.com/w54kTBEMmC

We are profoundly saddened at the passing of H.M Queen Elizabeth II.

On behalf of Europe’s Jewish communities we convey our deep condolences to the British Royal Family and to the citizens of the UK.

AJC joins the people of the UK, the Commonwealth, and the world in mourning the death of Queen Elizabeth II.

Queen Elizabeth was the embodiment of British resolve and grace for over 70 years and a dear friend to the Jewish people.

The Queen began her reign in 1953 at the age of 25, succeeding her father King George VI. She was married to Philip Mountbatten, Duke of Edinburgh, for 73 years until his passing in April 2021. She ruled during key world events, including the Cold War, the decolonization of Africa, Brexit and the COVID-19 pandemic, among many others.