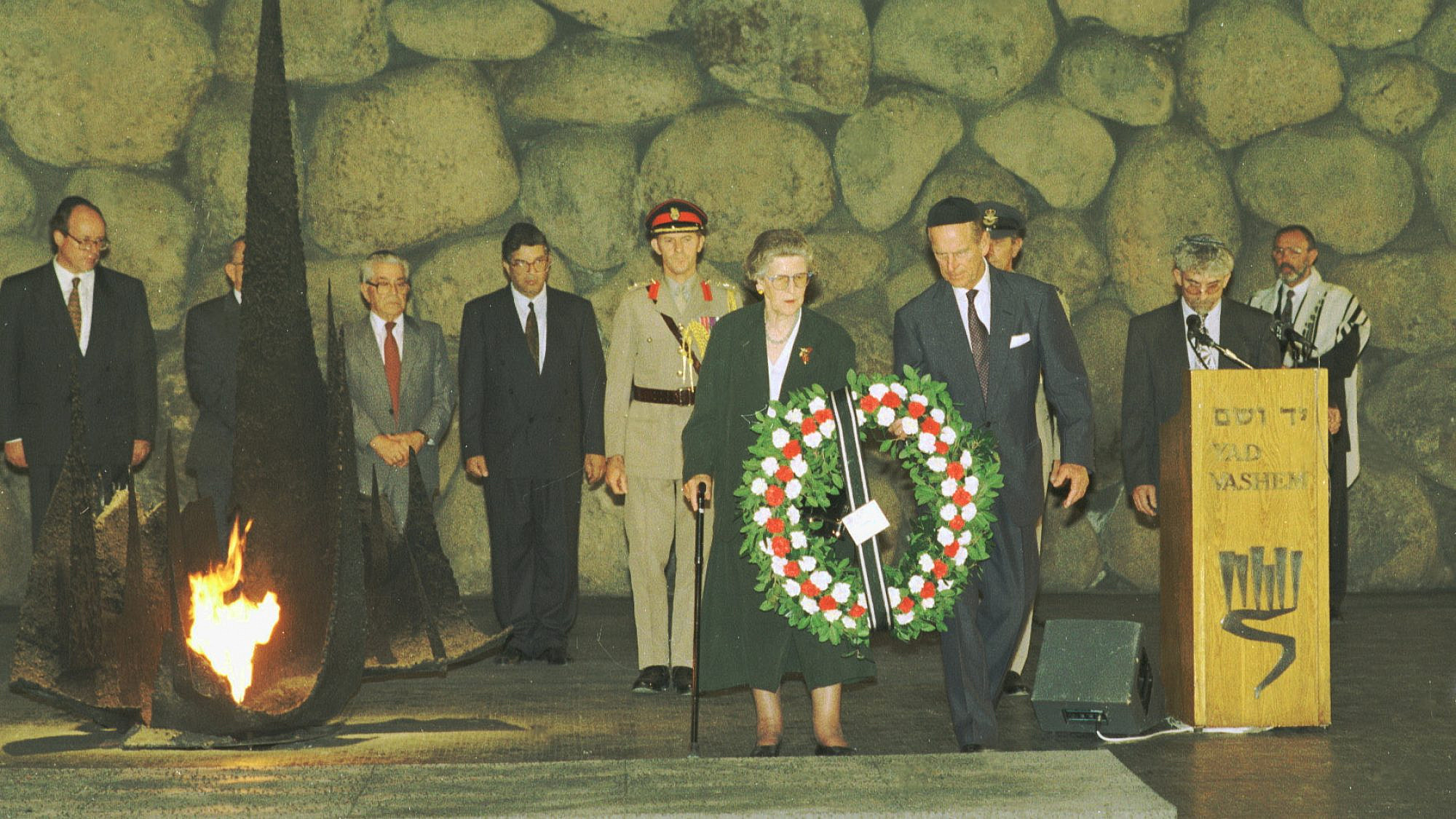 (April 15, 2021 / JNS) As the United Kingdom honored Prince Philip, who died on April 9 at the age of 99, with a gun salute, flags at half-staff and the many who paid tribute outside of Buckingham Palace, Sabbath prayers for the longest-serving royal consort were a bit different in synagogues across England.

For decades, the blessings recited for the royal family—“He who gives salvation to kings … may He bless our sovereign lady, Queen Elizabeth, Philip, Duke of Edinburgh … and all the royal family”—were missing for the first time for Prince Philip.

“There was a glaring omission,” noted Rabbi Yitzchok Schochet, religious leader of the Mill Hill Synagogue and one of the most influential rabbis in the United Kingdom. “All of a sudden, for the first time, we modified the prayer. It made everybody reflect on the end of an era.”

Born in 1921, the Duke of Edinburgh watched the tumorous decades of the 20th century and the atrocities in his backyard against the Jews. In 1994, in what was the first trip by a British royal to the State of Israel, he reflected on how he personally witnessed anti-Semitism.

He was 12 years old and he had transferred from England to a boarding school in South Germany. The school would appoint one of the older students to look after the school’s new enrollees. The “helper,” as he was called, who was appointed when he arrived, was a Jew.

One night, the helper was forcibly held down, while all of his hair was shaved off to shame him. “You can imagine what an effect this had on us junior boys,” he says, “Nothing could have given us a clearer indication of the meaning of persecution.” 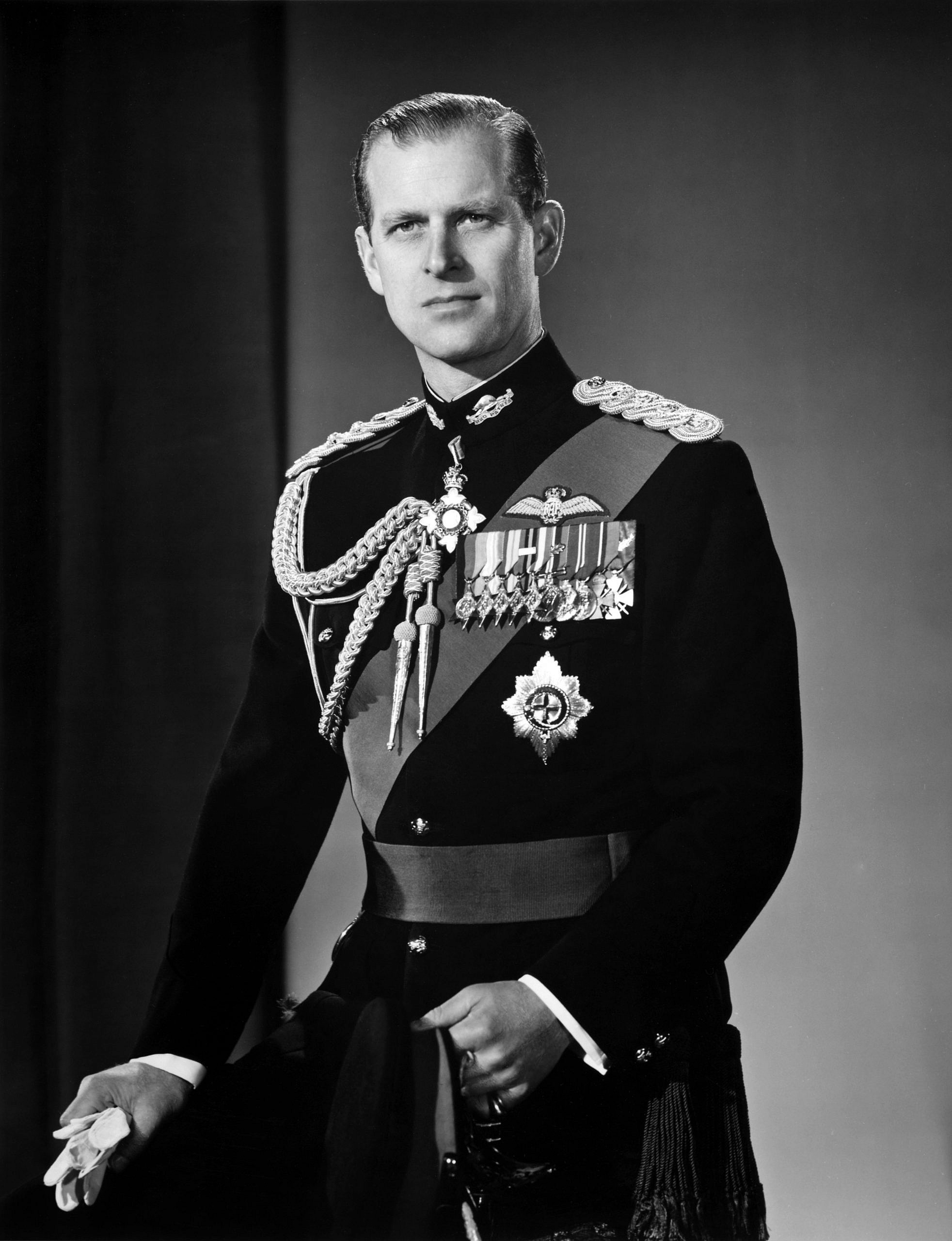 An official portrait of the Duke of Edinburgh. Credit: Wikimedia Commons.

The young Philip gave him his cricket cap, which the helper wore to cover his bald head. “It taught me a very important lesson about man’s capacity for inhumanity, and I have never forgotten it.”

One may dislike, or disagree with someone’s politics or opinions, he said, “but that should never allow us to condemn their whole community simply because of the race or religion of its members.”

Despite this, Prince Philip, who stemmed from royalty, told Jonathan Petropoulos for his 2008 book Royals and the Reich, that there were people in his immediate family that had inhibitions about the Jews and were jealous of their success. There was “a lot of enthusiasm for the Nazis at the time, the economy was good, we were anti-Communist, and who knew what was going to happen to the regime?”

Even during those tumultuous times, he said that “he was never conscious of anybody in the family actually expressing anti-Semitic views.” With that, three of his sisters became members of the Nazi party, and they married German princes, with one of them heading a division of Germany’s espionage network and killed during the war in 1943. Philip, on the other hand, was on the other side as a member of the British Royal Navy.

In 1947 he would marry Princess Elizabeth, who was crowned Queen of the United Kingdom in 1953. It was in the position as Consort that he served the country as the assistant to the Queen, usually remaining in the background, known mostly for his gaffes, verbal and otherwise, including several about Jews.

“Prince Philip reinforced his reputation for ill-chosen utterances,” The New York Times reported in 2005 after Prince Harry wore a Nazi swastika at a party, “when he addressed Chancellor Helmut Kohl of Germany as Reichskanzler—the title used by Hitler.” 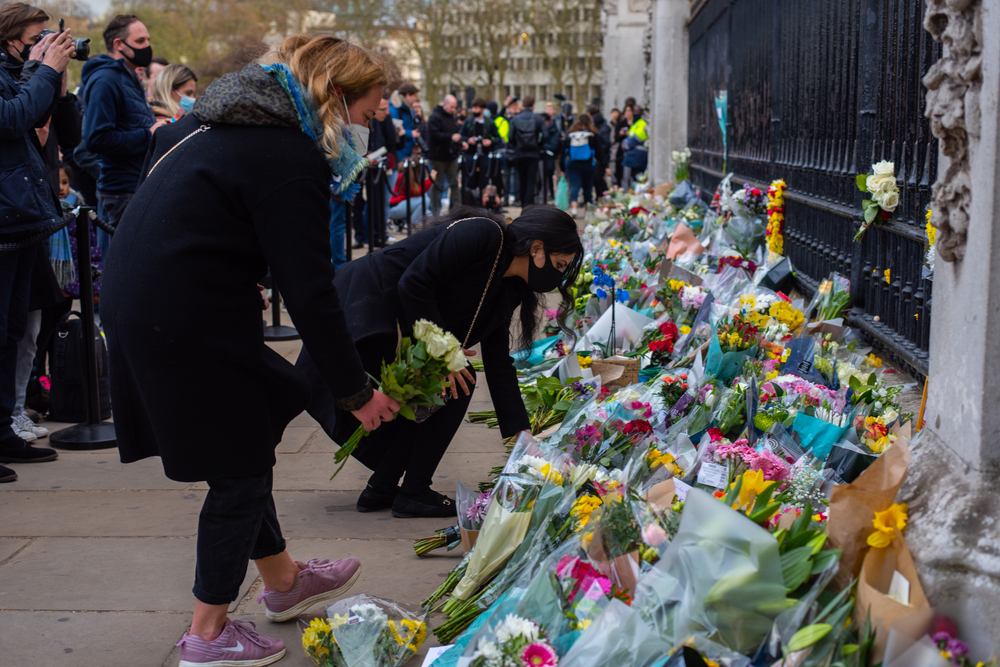 ‘In the memory of all future generations’

Still, Jewish leaders tended to agree that there was no malice in the prince’s mistakes.

“Philip is gruff and impetuous, but neither a boor nor a snob,” reflected Michael Berkowitz, professor of Modern Jewish History at University College London. “He’s a complicated man, and, I think, a good soul. He is what we call, in the Jewish history trade, a mensch.”

In a 1990 Los Angeles Times profile of Marvin Hier, director of the Simon Wiesenthal Center, tells of how Hier went to a reception of the Queen and Prince Phillip. Then a rabbi in Canada, Hier insisted on keeping his head covered with a traditional kipah, with which a noted Jewish Canadian jurist took issue. “To his dismay,” the Times wrote, “the royal couple was captivated by the head covering, engaging Hier and his wife in friendly conversation and ignored the judge.”

Philip’s greatest impact is the Duke of Edinburgh Awards, today present in 144 countries, which was inspired by Jewish educator Kurt Hahn. The need for self-improvement and exercise was a part of Hahn’s theory of education. Philip was a student at Schule Schloss Salem in Germany and the Gordonstoun School in Scotland, two of the schools Hahn founded.

“The founder of the school,” Philip said of Hahn, moved to the United Kingdom because he “had already been driven out of Germany by Nazi persecution, and this was well known throughout the school.” 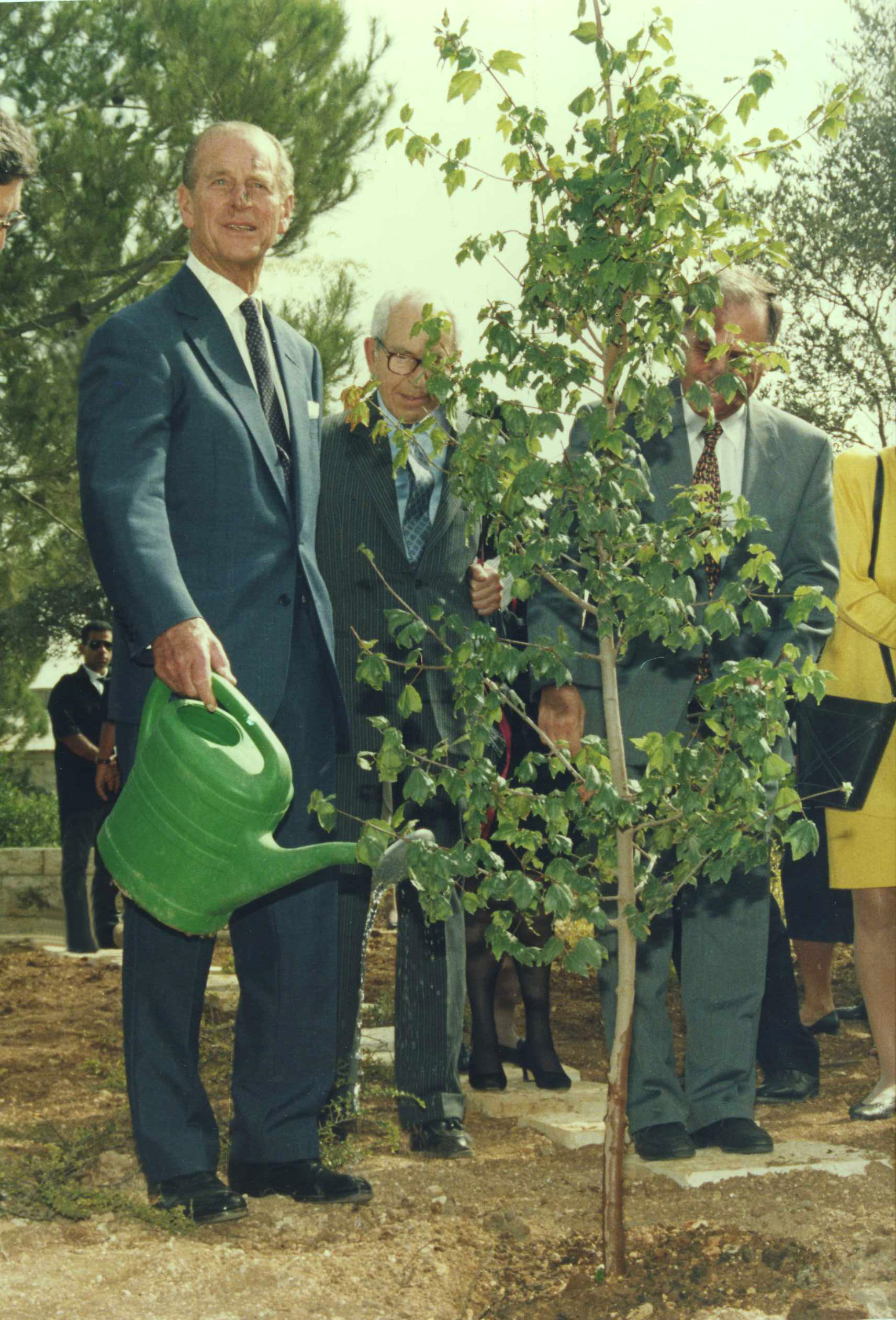 The awards are for community service, learning physical activities and skills, and going on expeditions, such as a mountain trek or a sailing trip. “Gordonstoun gave Prince Philip a much-needed sense of stability,” Philip Eade, author of The Young Prince Philip, told the BBC in 2016.  Hahn’s emphasis on obstacle races, seamanship and teamwork made a deep impression on him, “that has remained with him throughout his life and has doubtless helped him in all sorts of ways.”

In 2015, the Prince and Queen visited a concentration camp for the first time. They met survivors at Bergen-Belsen. Karen Pollock, chief executive of the UK Holocaust Educational Trust, later said that the survivors were touched by Prince Philip’s respect, affection and humor. “For the survivors who are with me,” she told The Guardian, “they’ve been saying to me this will be a very special day.” 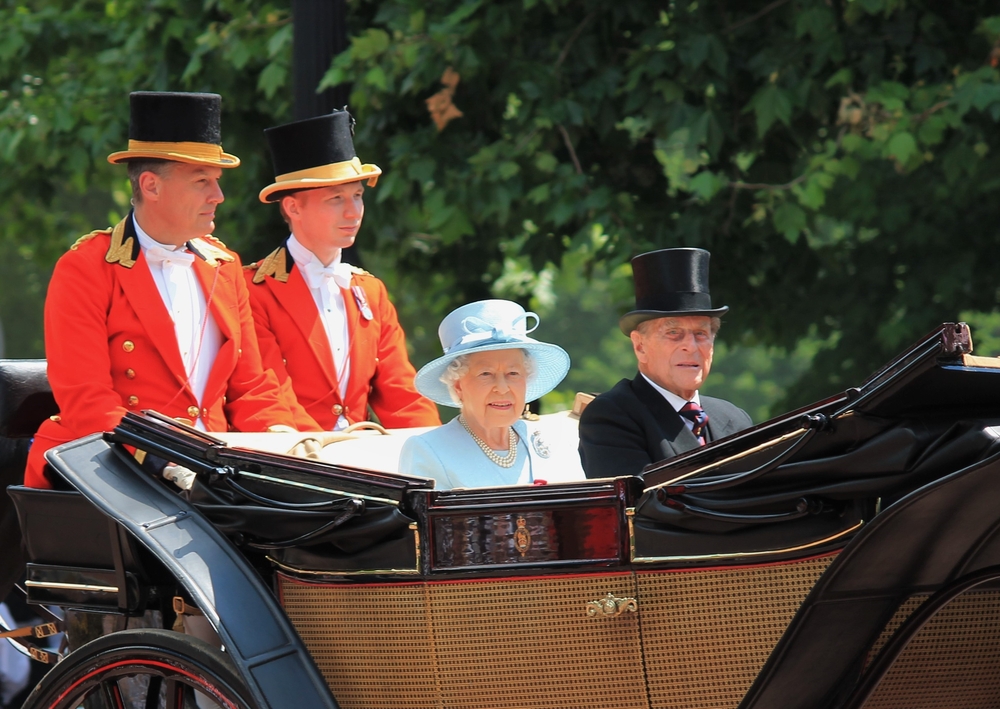 On his Israel trip, which was done in a private capacity rather than as an official representative of the United Kingdom since neither he nor the queen has ever been allowed by the British Foreign Office to visit Israel as they have other countries, Philip accepted on behalf of his mother, Princess Alice, the Righteous Among the Nations award for her saving a Jewish family during World War II. “The Holocaust was the most horrific event in all Jewish history,” he told those gathered at Yad Vashem Holocaust memorial center, “and it will remain in the memory of all future generations. It is, therefore, a very generous gesture that also remembered here are the many millions of non-Jews, like my mother, who shared in your pain and anguish, and did what they could in small ways to alleviate the horror.”

He said that the essential message of Yad Vashem is that all of those who were alive during the Holocaust understand that “it is only too apparent that this message needs to get through to present and future generations of all races and religions. The Holocaust may be over, but there are altogether too many examples in the world today of man’s capacity for inhumanity.”

Prince Philip will be laid to rest on April 19 as part of a Royal Family ceremony, albeit with far fewer attendees than usual due to current coronavirus restrictions.