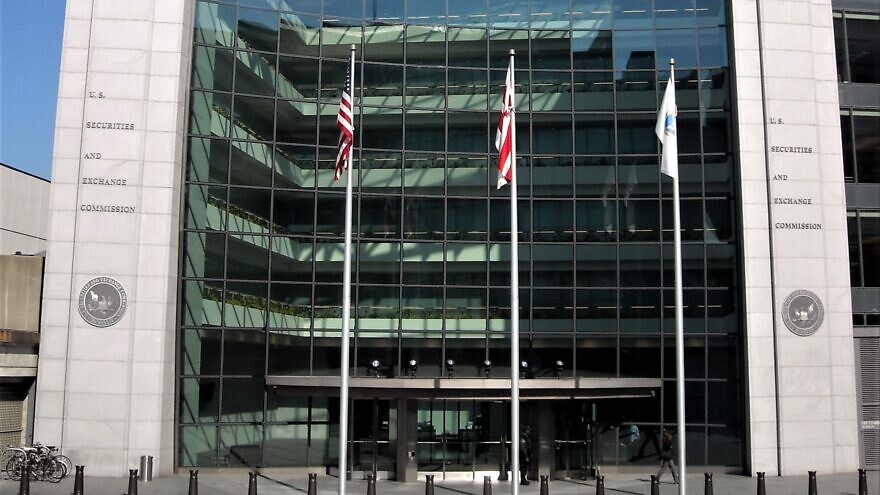 On Tuesday, the Jewish Federations of North America, American Jewish Committee and the Louis D. Brandeis Center for Human Rights Under Law submitted public comments to the Securities and Exchange Commission (SEC), as the agency prepares regulatory rule amendments for the environmental, social and governance (ESG) sector.

“Israel deserves to be held to the same standards as every other country, whether it’s at international bodies or in financial ratings,” said Eric Fingerhut, president and CEO of the Jewish Federations of North America. “We hope the SEC fulfills its responsibility to regulate financial institutions fairly and ensure they don’t become party to discrimination and falsehoods.”

ESG investing involves evaluating the extent to which a corporation works on behalf of social goals, rather than simply maximizing profits. The scheme opens up the potential for politicization of rankings and is facing a backlash from state authorities across the United States.

Chicago-based investment firm Morningstar and its subsidiary, the ratings firm Sustainalytics, are under investigation in Missouri for potential violations of laws against boycotts of Israel.

The entities have been accused of “backdoor BDS” by Elan Carr, a former U.S. State Department special envoy for monitoring and combating anti-Semitism, who has met with officials from a number of states to urge them to look into Morningstar’s practices. Action by Illinois’ investment board led to Morningstar commissioning an independent review of its practices and a host of recommendations to weed out anti-Israel bias, though critics say the proposed changes are superficial.

Sustainalytics’ ratings have been found to utilize anti-Israel sources and to weigh them disproportionately in assessing legal and reputational risk for investing in companies doing business in and with Israel and Israeli communities in Judea and Samaria. Investors are often unaware of those sources and how the ratings are calculated.

“The new rulemaking will require transparency across the board, and we are asking the SEC specifically to require ESG-related funds that focus on the social aspect of ESG to tell investors how they derive ratings for such companies, how they check for and eliminate anti-Israel bias in their sources, and whether they include anti-Semitism on their human-rights radar,” said L. Rachel Lerman, vice chair and general counsel of the Brandeis Center.

According to the proposed new SEC rules, investment advisors and investment companies would be required to make specific disclosures on ESG strategies in fund prospectuses, annual reports and adviser brochures. The rules would also force those entities to introduce a standard table for ESG funds to disclose information allowing investors to compare ESG funds quickly.

“People have the right to urge their moral vision on companies in which they invest, including urging participation in what we believe to be the unwise, even immoral boycott of Israel,” said AJC chief legal officer Marc Stern. “But other people have a right to know of those efforts and to oppose them to the extent that they affect their own investment decisions, whether because they don’t want to support that boycott, or because those efforts might trigger state anti-boycott laws. To be effective in those efforts, investors need to know in real-time who is urging what decisions on companies, funds and investment advisers.”