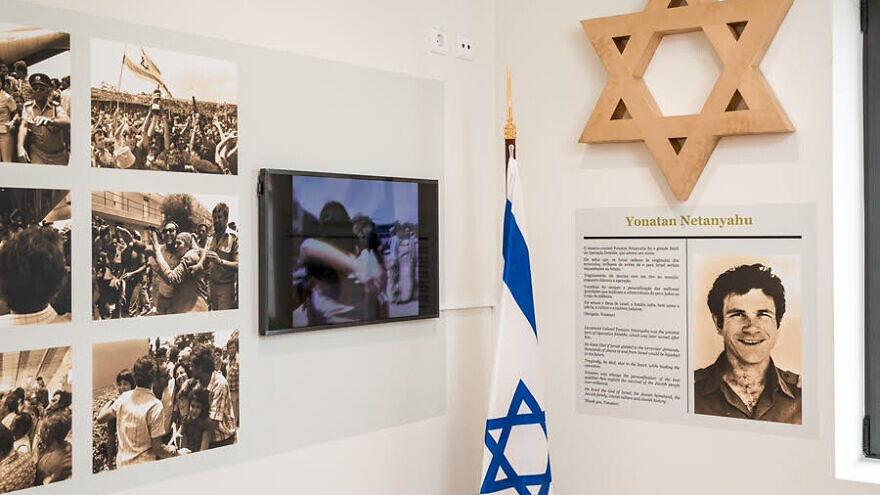 “The [exhibit] is aimed at educating young Jews who lack awareness of the many counter-terrorism actions that the Israel Defense Forces and Mossad have undertaken in the past and are prepared to undertake in the future,” said B’nai B’rith Portugal president Gabriela Cantergi.

“The idea of building a room dedicated to the Entebbe operation arose out of an event on June 21 in Oporto that brought together young Jewish leaders of various nationalities, and their main concern was whether Israel could stop a new Holocaust in any country in the world,” she explained.

Israeli Ambassador to Portugal Raphael Gamzou said that the exhibit teaches “that neither distance, logistics nor any other challenge would ever prevent Israel from doing the utmost to save the lives of its citizens.”

B’nai B’rith International CEO Daniel Mariaschin concurred. “The hostage-rescue operation in Entebbe exemplified Israel’s strength and resolve,” he said. “Dedicating an exhibit to that historic moment enables all visitors to the museum to know that Israel protects its people, wherever they may be.”

B’nai B’rith International president Charles Kaufman said the raid was not only the greatest hostage-rescue operation in Israel’s history but also represents Judaism’s “commitment to the value of preserving life.”

“’Operation Thunderbolt’ in Entebbe ushered in a new high watermark of recognition and admiration for the Jewish state throughout the world,” said Kaufman.

“Operation Thunderbolt” was carried out on July 4, 1976, by an elite unit of Israeli commandos, led by Yonatan Netanyahu, at Entebbe Airport in Uganda. Netanyahu, the brother of Benjamin Netanyahu—who would become Israel’s longest-serving prime minister—was killed during the operation.

The Jewish Museum of Oporto says that its mission “is to inform about the historic and cultural importance of the Jews in Portugal and of Portuguese Jews worldwide, with particular emphasis on the Diaspora of Sephardic Portuguese Jews and the history of the Jewish community in Oporto that is older than the foundation of Portugal.”