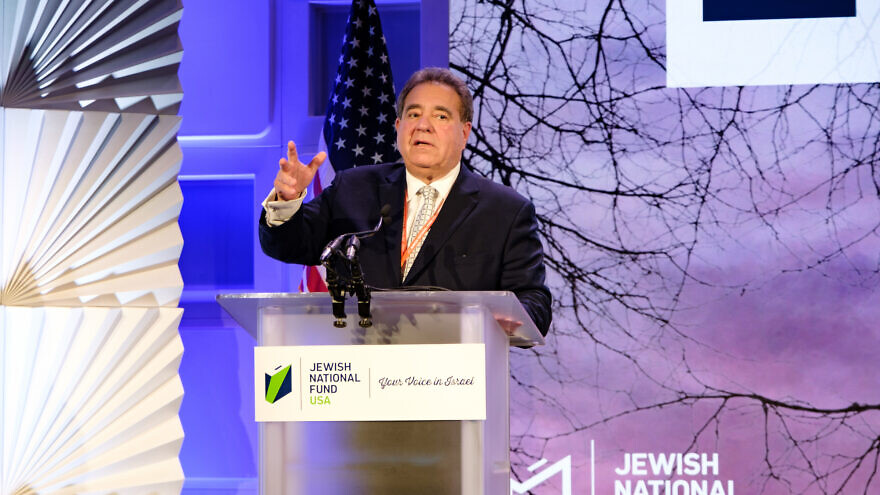 (November 25, 2022 / JNS) As Jewish organizations around the world are lamenting rising antisemitism, Jewish National Fund-USA CEO Russell Robinson believes that Jews are not focusing enough on their successes.

“We’re not losing, we’re winning,” he said during an interview with JNS near the conclusion of JNF-USA’s national conference in Boston in early November.

He added that Jews should stop telling themselves that they’re losing the war against antisemitism just because a few celebrities on social media like the rapper Ye (formerly Kanye West) or basketball player Kyrie Irving indulge in antisemitic conspiracies, or that a small group of pro-Palestinian protestors picketed in front of the conference where more than a thousand Jews celebrated Zionism.

“If you believe you’re a winner, you walk into a room a winner,” he said.

While Irving has been engulfed in an antisemitism scandal, Robinson noted, “I can name you 1,000 [basketball players] who love us. Not only love us, [but] go to Israel—to the Israeli national basketball team.”

Conference attendees were captivated by Robinson, a gregarious Texan who was raised in El Paso and has a sharp sense of humor. Some would stop him in the halls of the hotel to chat, or hoped during the gala performance on Sunday night that he would be called on stage by mentalist Jon Stetson, as they were sure that Robinson and Stetson would be entertaining.

He was also confident — in himself, his organization and in how the Jewish community today is doing better than ever, and much better than anyone expected more than half a century ago.

Robinson spoke of a 1964 cover story in the defunct Look magazine titled “The Vanishing American Jew.” He recalled that the article predicted the Jewish population in the United States would fall to 2 million by 2000. Instead, he said, there are 8.5 million American Jews and that number grew by 10% in the past decade.

“Our obituary keeps getting written but we keep growing stronger, bigger and better,” Robinson said. “There are more Jews today in America that speak Hebrew than ever before.”

Yet there are still challenges that the Jewish community can’t ignore, from Robinson’s perspective.

Robison often attends conferences for non-Jewish organizations and participates in a roundtable discussion of nonprofit leaders. None of the other organizations ever have to worry about security in the way that JNF-USA as well as other Jewish organizations, community centers and synagogues need to remain highly vigilant.

“United Way can have a conference and whomever the hotel security is, [that] is the [conference’s] security,” Robinson said. “We, as Jewish people—50 people are at an event [and] I have to pay for security. And believe me, it’s not because they’re dying to come in to have the kosher catering.…It’s a shame, a shame, a shame.”

Robinson said that many people tell him about the heightened security they had to implement at their synagogues, but that they didn’t like talking about it.

After bringing approximately 1,400 people to the Omni Boston Hotel at the Seaport, Robinson said that the organization’s leadership is pushing to double the attendance—to approximately 2,500—at next year’s JNF-USA conference, which will be held in Denver. Still, he doesn’t want the conference to be too large, in a way that loses the family-style atmosphere.

This year, Robinson said that the demand to attend was so high that he easily could have had 5,000 attendees had it not been for the limit of the venue.

“And [the] beautiful thing is that we’re going to have young people and older people coming together again,” he said.

Of the total attendees in Boston, 60% were under age 40 and approximately 600 were either high school or college students. Strengthening Zionism among the younger generation, he said, is essentially a theme (even if an unofficial one) of the conference every year.

“I think we got across that the next generation is great and we have great things [to offer them], and we just got to keep raising that flag,” said Robinson. “Because if you want to fight anti-Jewish behavior, if you want to fight all the issues, it’s not screaming at the anti-Jews. It’s giving our Jewish youth an opportunity to have pride.”

Robinson concluded, “Our Jewish community is growing. We’re stronger, we’re more unified, we’re connected to Israel, from young to old. And every naysayer out there, I’ll debate them on every statistical thing.”