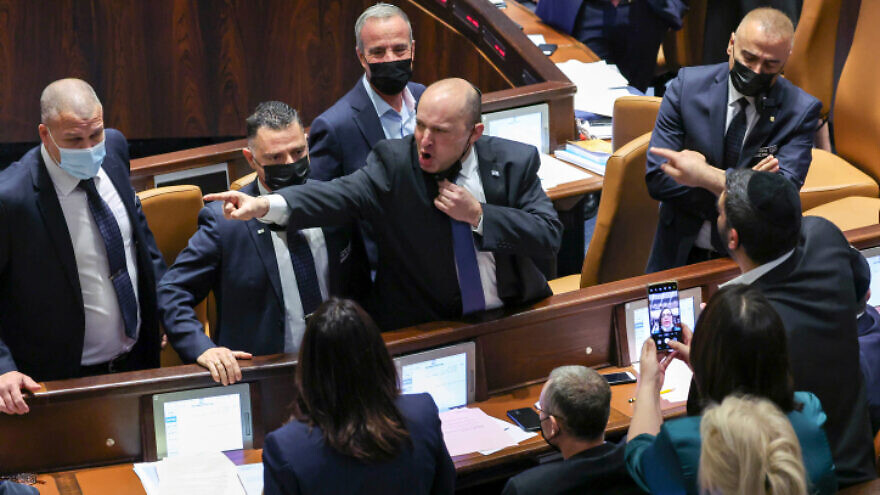 Israeli Prime Minister Naftali Bennett argues with opposition members during a vote on the controversial "electricity bill" at the Knesset in Jerusalem on Jan. 5, 2022. Photo by Yonatan Sindel/Flash90.
Spread the word.
Help JNS grow!
Share now:

(January 5, 2022 / JNS) Israel’s Knesset on Wednesday passed legislation to enable tens of thousands of illegally built Arab homes to be hooked up to the national grid, local media reported.

The “electricity bill,” which allows more than 130,000 Arab Israelis living on land defined as “agricultural” rather than “residential” to receive electricity, water and phone lines, passed by a single-vote majority (61:0) in the 120-seat parliament.

Proposed in August by Knesset Internal Affairs and Environment Committee chairman MK Waleed Taha from the Islamic Ra’am (United Arab List) Party, the bill has been a source of friction between Prime Minister Naftali Bennett’s governing coalition and the opposition, led by former Prime Minister Benjamin Netanyahu of the Likud Party.

Ahead of the pre-vote debate, Netanyahu and right-wing members of the opposition—who had decided to boycott the vote—heckled Bennett for voting against an amendment that would have enabled outposts in Judea and Samaria to be connected to the national grid.

When Taha switched to speaking Arabic at the event, which was broadcast live on Israel television’s Knesset channel, Likud MK Miki Zohar said: “I came this morning to work in the Knesset, the house of representatives of the State of Israel. When I hear Walid Taha explain the electricity bill in Arabic on the podium, it’s as though I was elected to a Palestinian parliament. Unbelievable.”

“The fact that you don’t know Arabic is your problem,” retorted Taha. “You don’t understand it? Go learn the language.”

Calling the passage of the bill a “black Day for Zionism and democracy,” Netanyahu tweeted that the “Bennett-Ra’am government today broke another anti-Zionist and anti-democratic record! In doing so, it is preparing for the Islamic Movement’s takeover of the Negev and the Galilee and fulfills a central pillar of the Palestinian plan to exercise the ‘right of return.’ In the same breath, the Bennett-Ra’am government voted against our proposal to connect the electricity of young settle[rs] in Judea and Samaria.”